Share All sharing options for: It's still perfectly legal in most states to fire workers for being gay or lesbian

It's legal in most states to fire an employee over his or her sexual orientation, but most Americans are apparently unaware of this fact.

A new poll from YouGov and the Huffington Post found about 62 percent of Americans think it's already illegal under federal law to fire an employee for being gay or lesbian. 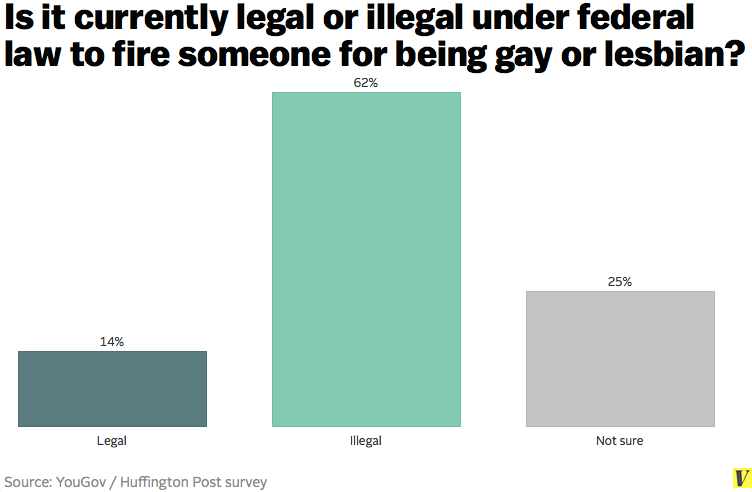 The poll's findings suggest that most Americans have no idea why President Barack Obama plans to sign an executive order that would make it illegal for federal contractors to discriminate on the basis of sexual orientation or gender identity, even as they support the basis of his actions.

Most Americans do overwhelmingly support protecting gay and lesbian workers from being fired over their sexual orientation, the same poll found.

That is, unless pollsters suggest that it requires legislation. There's a significant drop from Americans who think it should be illegal to fire someone based on sexual orientation to those who would favor a law that prohibits job discrimination. 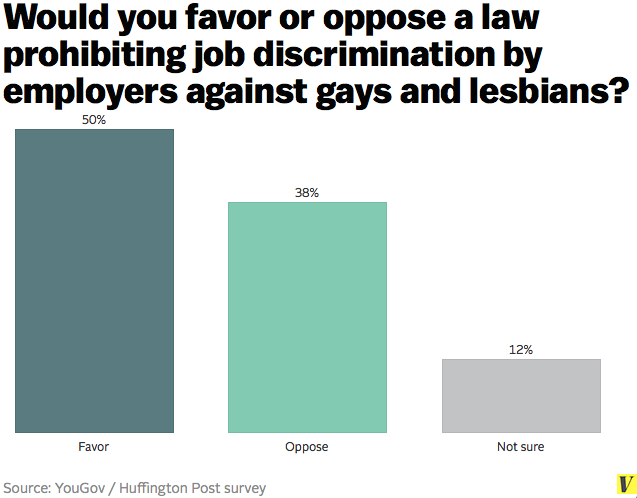 It's possible some respondents oppose a law because they think one is already in place. That perceived redundancy could help explain the discrepancy between the two survey questions.

Some Americans could be confusing local, state, and federal laws

As to why most Americans think a federal law already exists, it's possible they could be confusing local or state laws and their employers' policies with federal law.

Twenty-two states already prohibit job discrimination against gay and lesbian workers, according to HRC. That also doesn't account for the cities and counties that have passed their own nondiscrimination laws. So a good chunk of the population already has these types of protections in place.

Similarly, most federal contractors and many other private employers already prohibit discrimination on the basis of sexual orientation. HRC found nearly 91 percent of Fortune 500 companies include sexual orientation in their workplace policies and 61 percent include gender identity.

Either way, the public's incorrect perception on the federal law surely doesn't help the president's efforts to enact a non-discrimination law for LGBT workers. After all, most Americans don't seem to think it's necessary in the first place.