9 questions about Yo you were embarrassed to ask

Share All sharing options for: 9 questions about Yo you were embarrassed to ask

The very simple mobile messaging app Yo just announced $1.5 million in new venture capital fundraising from the VC firm Betaworks, the founders of Chinese tech giant Tencent, and Mashable Founder Pete Cashmore. Many people find the app baffling, but evidently some segments of the technology community are deeply intrigued. You've got questions and we've got answers.

Yo is a mobile messaging app available for iOS and Android devices. You establish a username. Then a friend who also uses Yo can select your username inside his app and you will receive a push notification reading: "Yo" and featuring audio of a voice stating "Yo."

No. Yo is very real, I have downloaded it myself and Yo-ed with Vox.com senior UX developer Yuri Victor.

4) Two and a half million dollars?

Yep. They got $1 million early on, and added another $1.5 million in mid-July.

Yo is a popular informal English-language greeting. It's also the title of a Chris Brown song:

Yo is the brainchild of Or Arbel, a former iOS developer at the image-sharing company Mobli. Arbel had left Mobli to work on a not-yet-released product called Stox. Arbel's former boss at Mobli, Moshe Hogeg, asked Arbel to "to make an app with one big button that could call his assistant without having to pick up the phone or compose a text message." Arbel initially refused, pleading a lack of time, but then hit upon the idea of switching the conceit up slightly to the brief greeting that is now the app's namesake. The $1 million investment comes from Hogeg's angel investment fund.

According to Tim Bradshaw, as of the end of June 17 "50,000 users have now signed up to Yo and sent a total of 4m messages — 2m of which were in the last month." Bradshaw's article has spurred considerable additional interest in the app so the numbers are surely much higher than that today.

Here are some reviews: 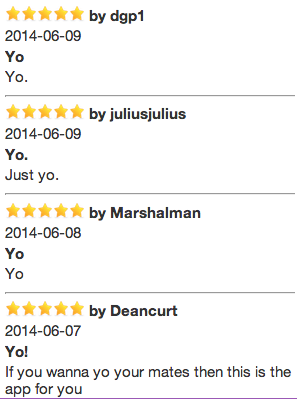 8) Has the world gone entirely mad?

Perhaps. People have been looking for a new tech bubble for years long before there was any evidence of one, and now we have some real evidence — see Judd Legum for the case. Totally ridiculous novelty companies attracting seven figure investments. The smartphone product category in general was badly overestimated during the first couple of years of Apple's iPhone, and a range of smartphone app categories (gaming, messaging, etc.) have also badly outperformed the conventional wisdom. When that happens, the conventional wisdom tends to recalibrate. And now you have people investing a million bucks in an app that just sends "yo" to people.

In a non-novelty context, the idea is that people may want to sign up for ultra-simple notifications. If you add the user WORLDCUP on Yo, it will notify you every time a team scores a goal. Then you can make sure to look up and catch the replay. Arbel says he's hoping to commercialize Yo by turning it into a platform for companies to alert people to when they're running sales. Here's the Yo API for developers:

Some example use cases:

Apparently. You should probably think of this as a general illustration of the principle that investing in early-stage startups is not really a rational act. Hogeg has the money to spare (apparently), has a relationship with Arbel, probably enjoys this media attention, and stands at least a sliver of a chance of somehow making this investment pay off. So why not?