The IRS scandal shows the IRS needs a bigger budget

Share All sharing options for: The IRS scandal shows the IRS needs a bigger budget

Over a year after a scandal involving IRS investigations into the tax status of conservative political non-profits, Congressional conservatives are still outraged. On Tuesday June 17, Dave Camp (R-Michigan) — who chairs the House Ways and Means Committee, which is responsible for tax policy — and Charles Boustany (R-Louisiana), who runs its oversight subcommittee, accused the IRS of covering up key documents during the investigation into that scandal; Philip Bump at the Washingon Post has a great explainer of that whole dust-up, if you're interested.

The same day, the House Appropriations Committee released its spending bill covering the IRS, which includes a number of provisions meant to prevent biased investigations in the future (though whether or not investigations were even biased in the first place is a matter of some dispute).

But the appropriations bill does something else: it cuts the IRS budget, substantially. The bill allocates $10.95 billion for the agency, $341 million below last year's level and $1.5 billion below what President Obama has requested. It is, the committee boasts, below sequestration-level funding and below spending seven years previous (not adjusting for inflation). That's a big problem. The IRS has been underfunded for years, and there's strong reason to believe that it needs more money if it's going to avoid issues like the one it ran into with conservative non-profits in the future.

The cost of budget cuts 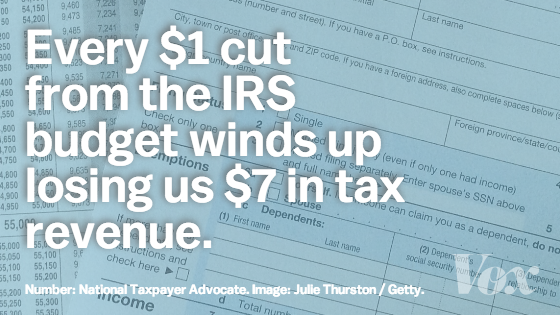 This year alone, two separate government reports have faulted IRS underfunding for weakening the agency's performance, harming taxpayers, and reducing revenue collected from enforcement. A GAO report found that cuts to the agency since fiscal year 2009 have considerable weakened its enforcement capabilities. The agency's target percentage of returns to audit has fallen. Wait times on calls from taxpayers have increased. Inquiries have been directed away from human responders to automated lines, and human responses have been delayed.

A report from National Taxpayer Advocate Nina Olson (who serves as the agency's inspector general) was even more damning. Due to understaffing, the report argues, tax-exempt statuses have been revoked erroneously. Necessary training for staffers is not being funded, leading to errors. It summarizes: "The IRS has been chronically underfunded for years now, at the same time it has been required to take on more and more work, including administering benefit programs for some of the most challenging populations. Without adequate funding, the IRS will fail at its mission."

It's not as though underfunding the agency actually saves taxpayers money over time. A Boston Globe investigation found that the IRS "makes billions of dollars in potentially fraudulent payments because it lacks the ability to check whether many returns are accurate before refunds are mailed." In the past, Olson's office has estimated that every $1 in budget cuts to the agency cost the government $7 in lost revenue, both from erroneous payments and from laxer enforcement. Recent budget cuts could wind up actually increasing the deficit in the long run.

How underfunding helped cause the IRS scandal

As ironic as the budgetary cost of the budget cuts is, the ultimate irony is that they could wind up replicating the scandal House Republicans are trying to address. There were a number of reasons for why the IRS started singling out groups with words like "Tea Party" and "patriot" in the name, but a lack of resources to do more effective screening was a major factor.

The core issue is that the IRS needs to figure out which nonprofit groups that file as 501(c)4s for tax purposes are eligible. Groups that primarily engage in electioneering are not supposed to use that status, as it allows them to evade campaign disclosure laws (501(c)4s are allowed to keep their donors a secret).

But enforcing that is tough. Part of the issue is that IRS rules on the matter have been ambiguous. The statute establishing 501(c)4s states that they must engage exclusively in "social welfare activity," which can include lobbying and political advocacy but does not include active campaigning. But for years the IRS interpreted that to mean that the groups must primarily engage in "social welfare activity," and could do some campaigning as long as it wasn't their main bag. A new proposed rule would clarify that "candidate-related political activity" doesn't count as social welfare activity, but it's unclear how much of the former 501(c)4s will continue to be allowed to do under the rule.

What's more, the number of groups claiming 501(c)4 status has shot up dramatically in recent years. Last year, Dave Levinthal at the Center for Public Integrity reported that new applications for 501(c)4 status shot up to 2,774 in 2012, up from just 1,777 the year before. Meanwhile, the Exempt Organizations Division (which is responsible for processing these applications and deciding who gets tax-exempt status) saw its staffing decline from 910 employees in fiscal year 2009 to 876 in 2012. So considerably fewer employees were suddenly charged with considerably more work.

And it's safe to say the work was more politically fraught and challenging. One consequence of the Supreme Court's Citizens United ruling was that donors started using 501(c)4s as ways to funnel money to Super-PACs anonymously; normally Super-PAC donations must be disclosed. Campaign finance reformers like Democracy 21's Fred Wertheimer have argued that groups like Crossroads GPS and Priorities USA — 501(c)4s with affiliated Super-PACs that were heavily involved in the 2012 election cycle on behalf of Republicans and Democrats, respectively — are essentially mechanisms for evading disclosure rules.

If that's correct, then the IRS needs to revoke the 501(c)4 status of those groups and force their donors to give publicly to Super-PACs; Brad Plumer explains how that process works here. But it requires investigating each group to see exactly what they're up to. That takes manpower, and time, and money. And Congress has been consistently denying the IRS those resources.

So it's no wonder that they took shortcuts. Of course, if those shortcuts were in fact politically biased, there's only so much that budget cuts could have contributed to that. There's no budgetary reason to look for groups with "Tea Party" in the name and not ones with "progressive." But again, accounts differ on whether or not the watch-words they used were in fact biased. What seems likelier than a nefarious conspiracy of mid-level IRS management to destroy the Tea Party is a group of overworked bureaucrats who saw group names as a way to make an utterly unmanageable workload somewhat more manageable.

The New York Times' Nicholas Confessore, David Kocieniewski and Michael Luo found as much when they looked into the IRS Cincinnati office, the epicenter of the scandal. "For months, the Tea Party cases sat on the desk of a lone specialist, who used 'political sounding' criteria — words like 'patriots,' 'we the people' — as a way to search efficiently through the flood of applications for groups that might not qualify for exemptions, according to the IRS inspector general," they write. "'Triage,' the agency’s acting chief described it." Olson's testimony before Congress this past February referred to the Exempt Organizations section as "overworked" and emphasized the giant backlog of applications they faced; conspicuously absent from her diagnoses of the department's problems was any reference to political bias.

If House Appropriations chair Hal Rogers (R-Kentucky) and his allies on the Hill simply don't think donors should have to disclose their contributions to outside groups, that's fair enough. They should make the case that one should be able to spend hundreds of millions of dollars influencing elections while keeping their identity a secret. But if they're serious about preventing scandals like the one that envelops the IRS last year, they need to start funding the agency as though it matters.