How violent crime gets worse in the summer

Share All sharing options for: How violent crime gets worse in the summer

Most types of crime are most likely to happen in summer. But you might be surprised by what sorts of crimes are "summer crimes," and which ones are most common in other seasons — or aren't dependent on the season at all.

A 2014 study, from the federal Bureau of Justice Statistics, looked at seasonal patterns in various types of crime in the US. The researchers went through surveys of crime victims from 1993 to 2010, and tried to figure out whether there statistical trends as to when crimes took place: during summer (June-August), fall (September-November), winter (December-February) or spring (March-May).

Because the study didn't include regional breakdowns, it's hard to tell whether it's warm weather that leads to more crime, or whether there's something else going on. And in most cases, the researchers didn't provide explanations for why these seasonal patterns existed. They just identified that the patterns exist.

The researchers found that "serious violence was significantly higher during the summer than during the winter, spring and fall seasons." That includes rape and sexual assault, robbery, and aggravated assault. Among adults, simple assault is also more common in summer than in other months. 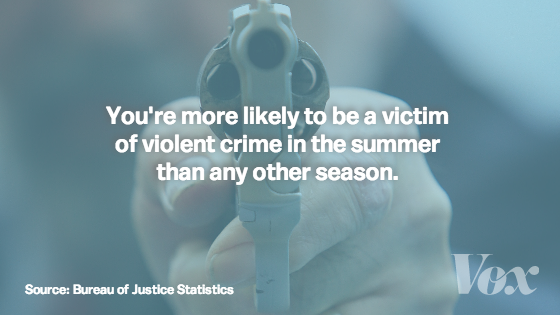 The biggest seasonal trend the researchers found wasn't in violent crime — it was in property crime, and specifically household burglary. Burglary is 11% more common in the summer than in the winter — that's more seasonal variation than for any other single type of crime.

But burglary is actually much less of a "summer crime" than it used to be. A past version of this study, which looked at 1973-1977, found that burglary was 23% more common in summer than in winter. That's twice as much seasonal variation as burglary rates show today. 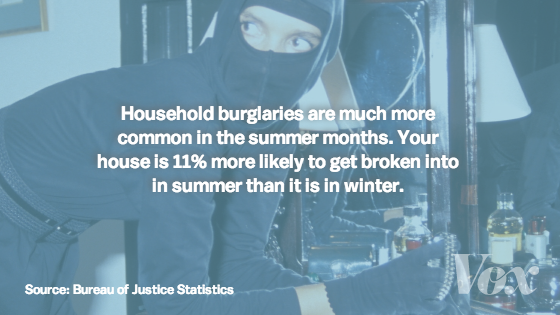 Simple assault is the only type of crime that's more common in fall than any other time of year. The reason for this isn't that it's somehow an autumnal sort of crime; it's that teens are disproportionately the victims of simple assault, and teen crime patterns are different from adults.

Among adults, simple assault is most common in the summer — just like any other sort of violent crime. But teens are actually safest in summer, when they're out of school. It's when they get back to the classroom in the fall that they're most at risk for simple assault. 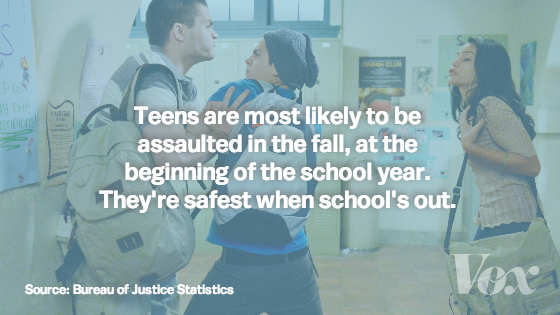 4) Spring is a relatively safe time of year

It might make sense that, if summer is the most dangerous season for crime, spring might be the second-most dangerous. But that's not the case at all. Most types of crime are more likely to happen in fall than they are in spring, and spring crime rates are similar to winter ones for many crimes.

In fact, in some cases, spring is the safest time of the year. Your car, for example, is less likely to be broken into in spring than at any other time. (There's no peak season for car theft, but thefts are substantially less common in spring than they are in other seasons.)

5) You can be mugged in any season

Interestingly, the one kind of violent crime that didn't follow any kind of seasonal pattern was robbery. Robbery rates fluctuate from season to season, but they don't follow any sort of regular seasonal cycle: overall, the rates are "statistically similar during winter, spring, summer, and fall," the researchers write.

Rape and sexual assault do follow a seasonal pattern — but, statistically speaking, there's no "single peak season" for rape. The researchers found that there wasn't a big difference between summer (the highest rate) and spring (the second-highest), or a big difference between spring, fall, and winter. In fact, sexual assault rates were higher in the winter than they were in the fall — whereas most types of crime are least likely to occur in the winter.

If you needed more evidence that the clothing women wear in warm weather doesn't encourage rape, there you go.