Why have so many people left the labor force?

Share All sharing options for: Why have so many people left the labor force?

The US labor force participation rate has been falling off in recent years — right now it's at 62.8 percent, down from over 66 percent pre-recession — and it's not alone. Other nations have seen their participation rates dragged down as well. That's in part because of demographics, as the baby boom is retiring worldwide, pulling people out of the labor force as they retire. But a bad economy can also pull down the labor force, discouraging people from even looking for a job.

According to data for 2007 through 2013 crunched by Wells Fargo, demographics (the gray-blue bars in the char below) have been a drag on the labor force in a handful of advanced economies. But among those countries, only the US has had other economic factors (red bars) pull its participation downward, giving it the biggest total decline in participation (black diamonds) over this period. 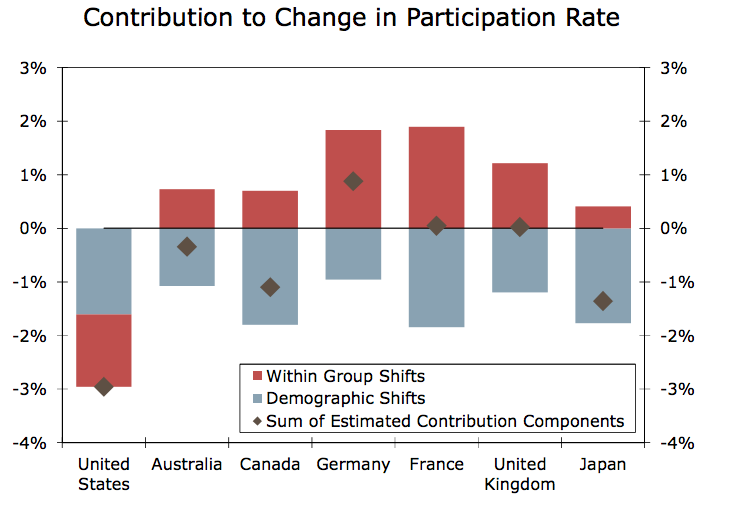 It's not that that red-barred decline in the US is all bad; more people going to college and graduate school could be pulling it down. But one thing that makes the US unique is that its prime-age working population — people age 25 to 54 — has fallen off more than that in other countries, Wells Fargo's economists write. There are a few theories as to why this has happened: a decline in the need for unskilled workers, in addition to lower pay for those workers could be part of it. And there's also, of course, the long-standing weakness in the labor market that could be keeping people out of the job.

The US had a particularly bad recession, losing more jobs than many of its peers. That may be one contributing factor — of the many, many Americans who lost jobs, many may have been unemployed so long that they simply stopped looking. 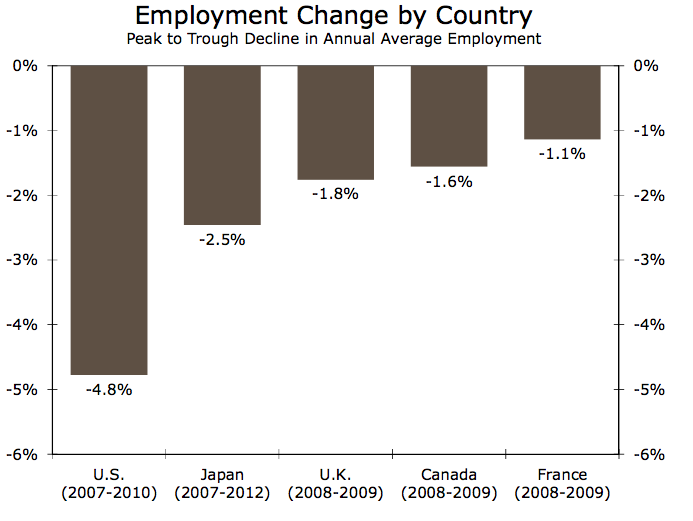 Wells Fargo's count of how much demographics contribute to the declining labor force is just one estimation of how demographics and economic factors play into the falling labor force participation rate. Figuring this out has been one of economists' favorite puzzles in the last few years, and no one exactly knows for sure.

But exactly why this decline is happening is of particular concern to economists. In their meeting this week, members of the FOMC will undoubtedly consider exactly what the stubbornly low participation rate means. Knowing exactly how much slack is in the labor market means knowing how much stimulus the Fed should or shouldn't provide in helping the economy continue to recover.