Educated workers are flocking to San Francisco, the middle class is moving to Atlanta

Share All sharing options for: Educated workers are flocking to San Francisco, the middle class is moving to Atlanta

Richard Florida and his colleagues at the Martin Prosperity Institute made the following chart illustrating class polarization in America's largest metropolitan areas by breaking down their net domestic migration levels according to educational attainment: 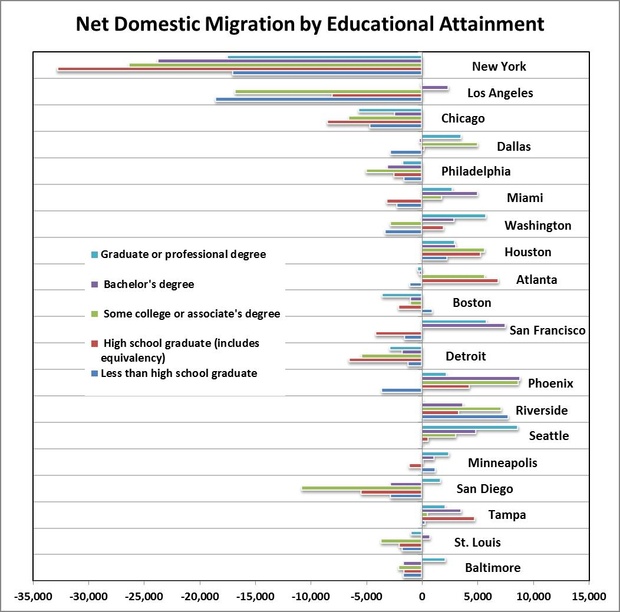 One unfortunate limit of this dataset is that by limiting itself to domestic migration, and not scaling for population size it creates a visual images that's a little excessively dominated by the idea of massive population loss in the New York City area.

But it paints a really excellent portrait of the dynamics in a place like San Francisco. Thanks to the booming high tech industry clustered in the Bay Area, highly educated workers are flocking to this metropolitan area. But development restrictions prevent Bay Area housing stock from expanding rapidly in response to this demand. The result is that instead of the boom trickling down to the area's working class residents, they're being pushed out by high housing costs. A similar overall trend, though less extreme, is happening in Seattle, Washington, Miami, and some other coastal cities.

By contrast Atlanta and Riverside are witnessing huge growth in its middle class even while losing highly educated workers due to a lack of prestige jobs and high-end amenities.