Share All sharing options for: Only 11% of Democrats want a more liberal presidential nominee than Hillary Clinton

Many political commentators have written that Hillary Clinton could face a challenge from the left in 2016. For instance, Noam Scheiber wrote at TNR last year that "the debate over the power of America's wealthiest" would "cut to the very core of the party," and that "judging from recent events, the populists are likely to win." But last week, Matt Yglesias argued that the Democrats aren't really all that split on those issues, writing, "It is impossible to mount a coherent anti-Clinton campaign because there is no issue that divides the mass of Democrats."

Now, a new poll from CNN and ORC International shows us how many Democrats are yearning for a progressive candidate to save them from Hillary 2016 — very few: 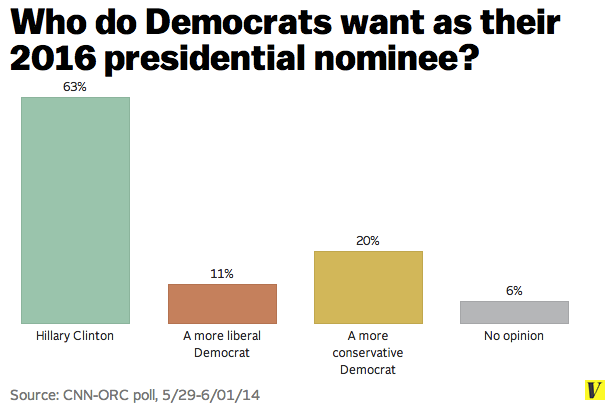 Since every poll of the Democratic presidential race shows an overwhelming Clinton lead, the CNN-ORC poll doesn't ask about specific alternatives to Clinton. Instead, Democrats and Democratic-leaning independents are asked about generic, ideologically-different possibilities. Even then, a large majority of Democrats think she should be the party's standard-bearer. And of those who'd prefer an alternative, nearly twice as many want someone more conservative.

This is not a promising situation for a prospective progressive challenger. In contrast, back in early 2007, though Clinton was the front-runner, she reached only 30 to 40 percent in polls of Democratic voters. Her lead now is much more imposing.