5 months into legal pot sales, crime is down in Denver

Share All sharing options for: 5 months into legal pot sales, crime is down in Denver

Denver's marijuana businesses are on pace for a three-year low in robberies and burglaries, even after full retail sales of recreational pot began in January.

There were 54 burglaries and one robbery at licensed marijuana facilities from January through May 25, according to new data from the Denver Department of Safety. If the current trend continues, cannabis businesses are on pace to hit roughly 137 burglaries and two to three robberies by the end of the year.

Throughout these three years, marijuana laws have been substantially relaxed in the city. Colorado legalized marijuana in December 2012, although retail sales in Denver did not begin until January this year. In 2012 and 2013, pot shops only sold medical marijuana.

Now, the amount of robberies and burglaries could pick up later in the year. It's possible, for instance, that warmer weather or other factors could foster more crime, and Denver's pot businesses just haven't seen those other factors play a role yet.

But the downward trend reflects a broader citywide downturn in violent and property crimes since marijuana legalization began in Denver. As the months roll on, the spike in crime that legalization opponents warned about doesn't seem to be occurring — at least as far as the city's crime statistics are concerned.

Violent and property crime are down in 2014

Both violent and property crimes are down 1.9 percent and 11.5 percent, respectively, from January through May 2014 compared to the same time period last year. Burglaries in particular have fallen 5.4 percent, and robberies are down 3.9 percent. 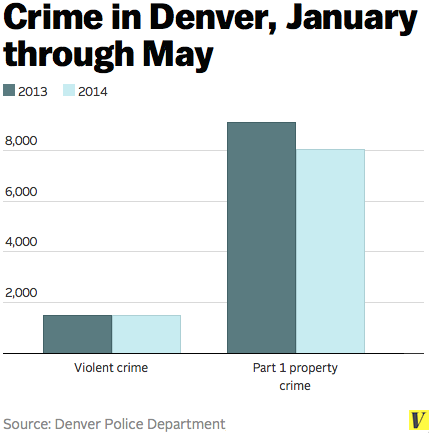 Since retail marijuana sales began in Colorado, the state been under a microscope as the world watches to see if marijuana legalization can truly work. Denver, where a plurality of licensed marijuana shops are located, has become the center of the legal pot industry.

The crime rates, of course, aren't necessarily linked to legal marijuana. Much bigger factors, like the economy or weather, likely have much larger effects on citywide crime.

In a way, however, the small impact of the pot industry is the point. Prior to legalization, law enforcement officials from across the city, state, and country warned that crime would increase following legalization.

Denver District Attorney Mitch Morrissey, for instance, argued robbers would prey on marijuana businesses and their customers, because they carry lots of cash and, of course, the drug. He even made highly disputed claims about double-execution-style homicides.

A sheriff in California, meanwhile, said Colorado would come to regret legalizing marijuana, based on his county's supposed experiences with the drug. "Thugs put on masks, they come to your house, they kick in your door. They point guns at you and say, 'Give me your marijuana, give me your money,'" he said.

Even marijuana businesses were somewhat concerned about crime prior to full legalization, although only because of federal policies that make running a legal pot business so difficult. Pot shops and cultivators are still for the most part unable to open bank accounts and, as a result, have to hold their earnings in cash, which could expose them to more robberies and burglaries.

So far, however, the fears of more crime simply haven't lived up to the dire warnings. Legal pot seems to be going a lot better than law enforcement feared.