Here are the most walkable metro areas in the US

Share All sharing options for: Here are the most walkable metro areas in the US

There's a new ranking of the most walkable metro areas in the US, courtesy of Smart Growth America.

The organization looked at the country's 30 biggest metro areas, and counted the number of walkable areas — neighborhoods with walk scores above 70 — in each. Then, for the rankings, they calculated the percentage of each metro area's office and retail space that was located in these walkable neighborhoods.

The rankings are separated into four tiers. Here are the top six, rated as having "high walkable urbanism":

This top tier doesn't include a ton of surprises, but one might be that New York isn't number one.

But the report authors explain that their metric doesn't just consider a walkable downtown — which New York certainly has — but the walkable neighborhoods located throughout a metro area, including the suburbs. Just 8 percent of the New York metro area's 22 million people live in Manhattan, where 89 percent of the walkable space is. DC, on the other hand, has nearly half of its 45 walkable neighborhoods in the suburbs.

So what is walkability?

The whole report is defined by the number of neighborhoods with walk scores above 70. These scores are calculated on a 1-100 scale, based on how many amenities — like grocery stores, schools, pharmacies, parks, etc — can be easily reached on foot. It also takes into account how pedestrian friendly a neighborhood's streets are, based on things like crosswalk design and block length.

If a whole neighborhood has a score about 70, it means that most daily errands can be completed on foot. Now, back to the rankings.

The report labels these metro areas as having "moderate walkability." They have less than half the total number of walkable neighborhoods as the six cities in tier 1, and the vast majority of these neighborhoods (ranging from 75 to 99 percent) are located in the city centers, rather than the suburbs.

Several metro areas on this list — Pittsburgh, Cleveland, Baltimore, and Philadelphia — have one thing in common: they're older, post-industrial cities that were mostly designed over a century ago, back when walking was simply the main way people got around.

After decades of slowed economic growth — with most of it occurring in the suburbs —they've seen varying degrees of resurgence in their central urban areas. This has allowed walkable neighborhoods to re-develop in the denser street plans laid out long ago.

These metro areas, according to the report, are "tentatively" walkable — they each have a handful of walkable neighborhoods, mostly in the central city, but are mostly just accessible by car.

In recent years, a few of them — including Los Angeles and St. Louis — have intentionally tried to seed walkable neighborhoods with new mass transit projects, with varying degrees of success. 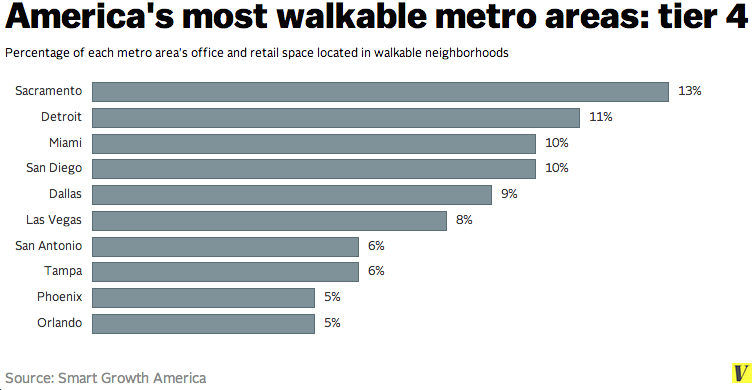 With the glaring exception of Detroit, these are mostly sunbelt metro areas that have grown rapidly over the past 50 years, and designed all their growth around one form of transportation: the car.