Share All sharing options for: The media got it wrong: Bikeshare programs don't increase head injuries

Last week, lots of media outlets reported that bikeshare programs — which tend to encourage biking without a helmet — led to an increase in head injuries.

But that claim was wrong.

head injuries have actually fallen in cities with bikeshare programs

As pointed out at StreetsBlog and CityLab, head injuries have actually fallen in cities with bikeshare programs.

So why the confusion? Everyone was focusing on a new study in the American Journal of Public Health. That study looked at five cities that had adopted bikeshare programs and compared them to control cities. The researchers found that overall injuries for bicyclists went down by about 28 percent in the bikeshare cities (and head injuries went down 14 percent). But head injuries as a proportion of all bike injuries went up.

The first finding is more important — but it was largely ignored in the initial round of coverage. Even though bikeshare programs encourage more people to bike without a helmet, the overall number of head injuries by bicyclists declined. That's especially notable given that the number of miles biked went up in bikeshare cities.

Here's a full explanation of the study — and how it became so distorted.

What the study actually found

The study, by a team of researchers from Washington State University and elsewhere, looked at head injuries in five cities that started bikeshare programs (DC, Minneapolis, Montreal, Boston, and Miami Beach), comparing them to five cities that didn't (New York, Milwaukee, Seattle, Los Angeles, and Vancouver).

Using emergency room data, they tracked injury rates for the two years that preceded the introduction of each city's program and compared them to the year that came afterward.

One of their findings — which was featured prominently in the abstract, the university press release, and subsequent media coverage — was that in the bikeshare cities, head injuries constituted about 42 percent of all bike accident injuries before the programs were introduced, and about 50 percent afterward. In the control cities, on the other hand, the figure dipped slightly, from 38 to 36 percent. 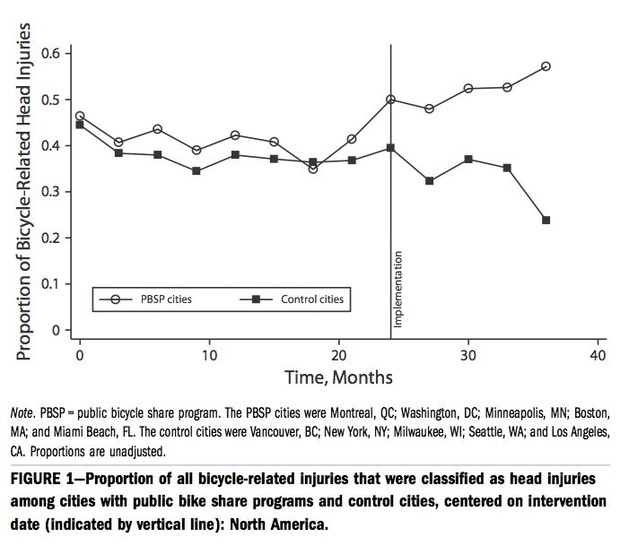 Citing studies showing bikeshare riders wear helmets at significantly lower rates (in Boston and Washington, 19.2 percent wore them, compared with 51.4 percent of all bikers), the researchers infer that bikeshare is part of the problem.

In the paper itself, they represented all this accurately, stating "the odds of a head injury among injured bicyclists increased in PBSP [public bike share program] cities after program implementation." (Emphasis mine.)

But head injuries declined significantly when bikeshare programs were introduced

Yes, head injuries increased as a percentage of all bike accident injuries after bikeshare programs were rolled. But that's only because the total number of bike-related injuries dropped so dramatically — by about 28 percent on average. Head injuries fell too, just not by as much: they dropped by about 14 percent.

to put it charitably, this seems like a strange and misguided interpretation of the data

As a rough analogy, imagine a school has a graduating class with one thousand students. Teachers implement a novel teaching strategy — say, giving out flashcards for them to use — and then give them a test. On the previous test, 100 students got D's, and 100 got F's, but on the latest test, only 72 get D's, and 86 get F's.

The big takeaway, obviously, is that fewer students are failing, perhaps due to the flashcards. A much subtler finding is that students who got F's constitute an increased percentage of failing students (we're counting D as a failing grade here). But inexplicably, that's what the researchers chose to focus on in this new study.

To put it charitably, this seems like a strange and misguided interpretation of the data (As Jaffe at CityLab put it, "they seemed to miss the forest for the trees"). A more critical view would be that the researchers went looking for evidence that bikeshare programs are dangerous, and upon failing to find any, cherry-picked a relatively unimportant sub-trend and trumpeted it as decisive finding.

So how did the bikeshare programs make biking safer? 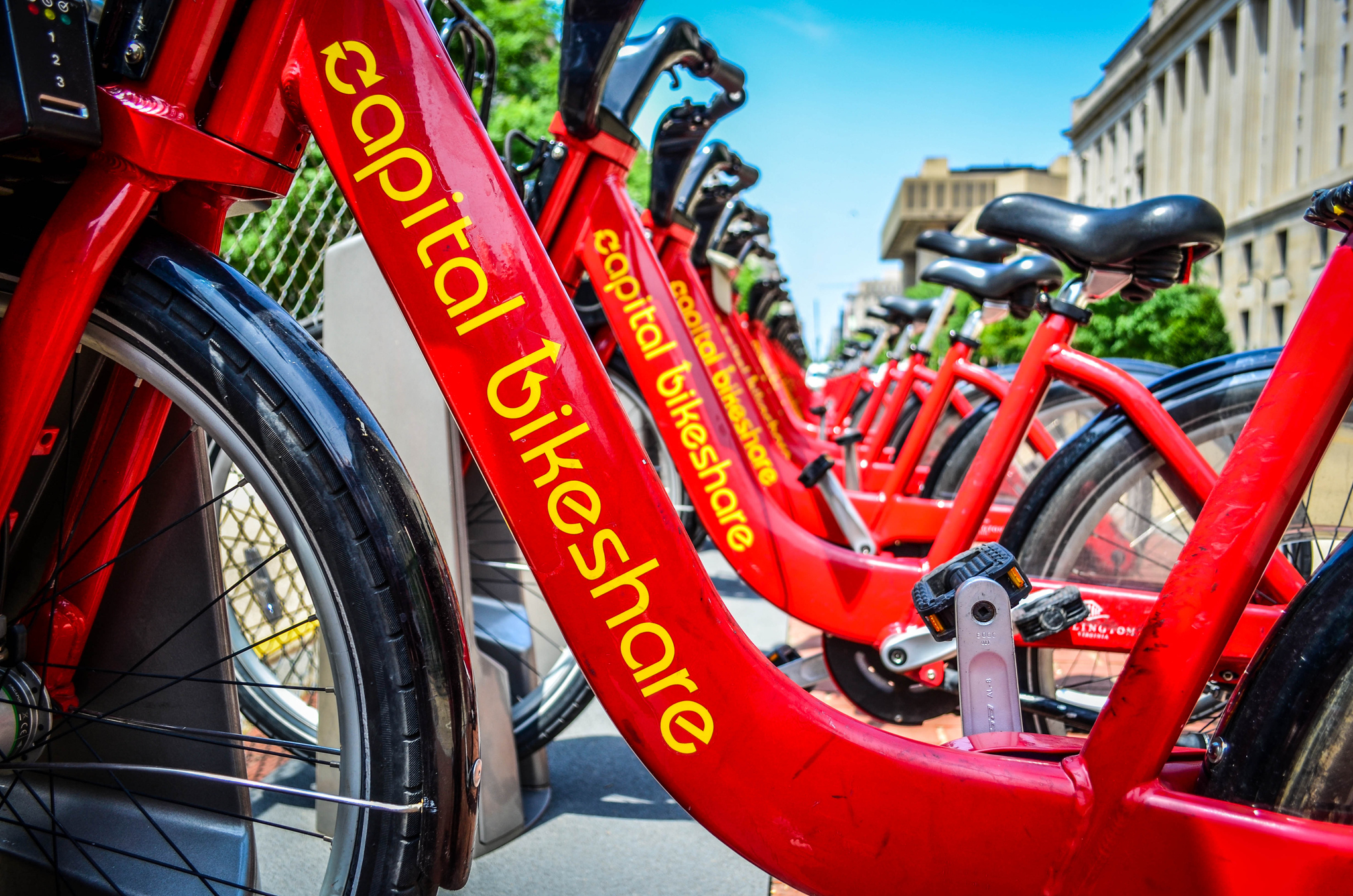 This is the most important and surprising question to come out of the study. What makes the 28 percent decline in biking injuries (and 14 percent decline in head injuries) even more remarkable is that they happened even as people began biking dramatically more in these cities.

In DC, for instance, bikeshare members rode 4.4 million miles in 2012. We don't know how much of an increase this is compared to all biking (because we don't have data on total biking), but if it represented a five percent increase in miles biked, we'd expect to see at least a five percent increase in total injuries and head injuries. To see these declines means biking in DC has gotten a lot safer since bikeshare was introduced, even if a smaller percentage of bikers is wearing helmets.

What could account for this surprising trend? One possibility is the basic fact that the number of bikers on the road most strongly predicts biking safely — and that helmet use doesn't seem to be strongly correlated with it.

When drivers get used to seeing cyclists everywhere, they're much less likely to hit them. Other factors (such as protected bike lanes) are definitely important, but bike helmets can't replicate the "safety in numbers" effect in making biking safer — any more than bulletproof vests can reduce gun violence.

It's impossible to determine that these bikeshare programs caused the declines in injuries that followed them, rather than simply being correlated with them. But given everything we know about bike helmets and injuries, the most reasonable interpretation of this new data is that the programs made biking safer by putting many more bikes on the road, even if most of their riders aren't wearing helmets.

This makes it a very good thing that most bikeshare programs don't require adults to wear helmets, and that Dallas recently eliminated its helmet law in advance of a new bikeshare program to be introduced later this year.

Correction: this article first said CityLab was the first to point out the error in the study coverage.