This map shows how stressful life in your state is

Share All sharing options for: This map shows how stressful life in your state is

Which states are the most stressed? Chris Kolmar tries to answer that question indirectly over at the Movoto Real Estate blog. He collected data from the US Census's American Community Survey on 6 indicators: hours worked, population density, unemployment rate, commute length, how much income is spent on housing, and how many people lack health insurance. Many of these have been highly correlated with stress in studies (see here, here, and here), though others, like statewide population density, are less well-supported. He then averaged each state's ranking to get a composite score. Here's a map of his results: 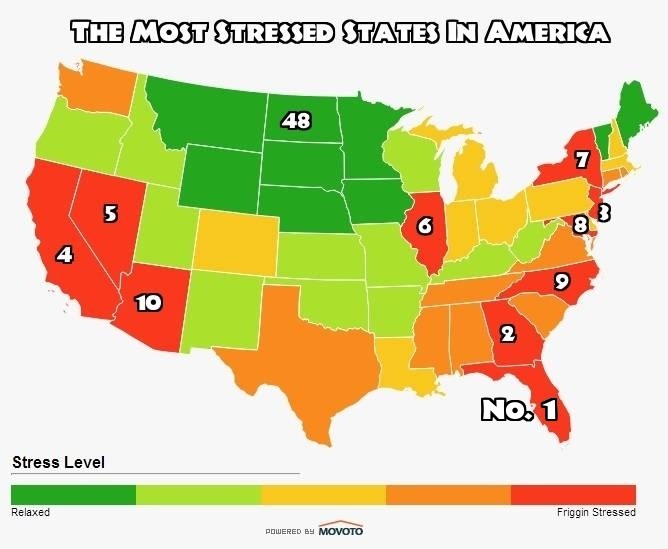 More revealing than the map is the table below, which shows state rankings on all 6 indicators, and lets you piece out how each state got its overall score:

Among the worst-performing states, Florida, Georgia, California, and Nevada all rank poorly because of high unemployment, lots of people lacking health insurance, and high housing costs. Meanwhile, New York, New Jersey, and Maryland are most hurt by long commutes and high population density. And Texas has the highest percentage of uninsured people of any state, and ranks third in average hours worked.

Meanwhile, North Dakota, South Dakota, and Nebraska all score well on almost every indicator — except they do tend to work a lot. Hawaii and Alaska were left out, but Kolmar explained in a comment that they placed near the middle of the pack. Head over to Movoto for the full analysis.