Starbucks' pledge to help employees pay for college with online courses from Arizona State University is far more generous than most companies' tuition plans. The Obama administration has praised the program as an example for the country.

But the tuition program is less generous than many headlines imply. Employees will still face big hurdles on their way to a degree. If Starbucks is going to make a difference, though, it will be for a crucial group: those who have tried — and failed — to complete college before.

The problem: The US is falling behind on college attainment

The problem isn't that Americans have stopped going to college. They're going in droves. College attendance hit an all-time high in 2009, and young people in the US are more likely to go to college than in most other OECD countries: 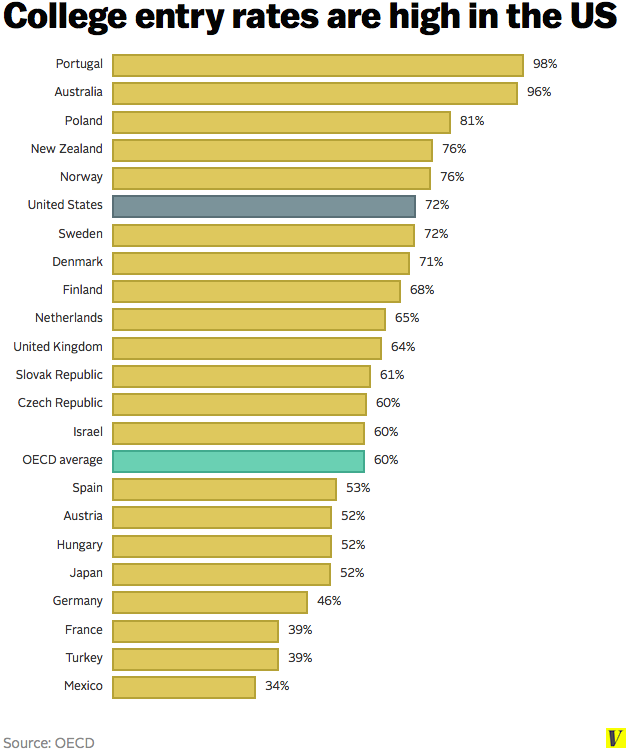 The problem is that they're also more likely to drop out: 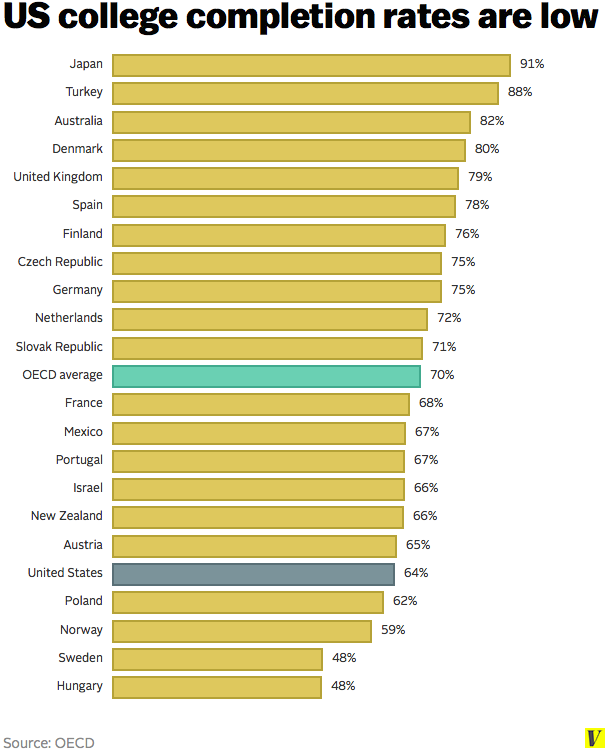 As a result, 22 percent of American adults — 37 million people — have some college credits but no college degree.

The new Starbucks program will help those adults the most

Starbucks will reimburse employees' tuition for online classes at Arizona State University, which offers 40 undergraduate degree programs. Employees will have to work at Starbucks at least 20 hours per week. The reimbursements will increase as they get closer to a degree.

Employees with at least two years of college credit who are admitted to Arizona State will get a full refund of their tuition expenses; freshmen and sophomores will be reimbursed at lower rates.

That means adults with some college credits, whether a full-fledged associate degree or just a handful of classes, could benefit the most. In the quest to get more college-educated Americans, these adults are considered low-hanging fruit. An experiment last year surprised more than 6,000 people who'd dropped out of four-year colleges with the news that they had enough credits for an associate degree.

The Education Department found students who started at a four-year college in 2003 and left without a degree earned an average of 63 credits before they dropped out. That's enough to qualify as a junior at Arizona State.

If Starbucks employees follow similar patterns, the tuition benefit could help them jump back into higher education. In 2013, the nonprofit group Public Agenda asked college dropouts whether a grant covering books and tuition expenses would persuade them to go back to college. Fifty-seven percent said they thought going back would be "pretty easy to do" given that financial help.

Still, there is a vast gulf between a relatively generous tuition reimbursement and a free college degree. Starbucks employees are eligible for federal grants, and they'll also get an additional grant up front to help them pay for college at Arizona State. But Starbucks won't begin reimbursing tuition until students have completed 21 credits. That's more than a semester of full-time attendance that costs about $10,000. Grants will cover part of that cost, but some of it will probably have to come from students' savings or from federal loans.
Starbucks also expects employees to work at least 20 hours a week. That's the same threshold the company has for other benefits, such as health insurance, but it will make their students a rarity among peers attending full-time at four-year colleges: 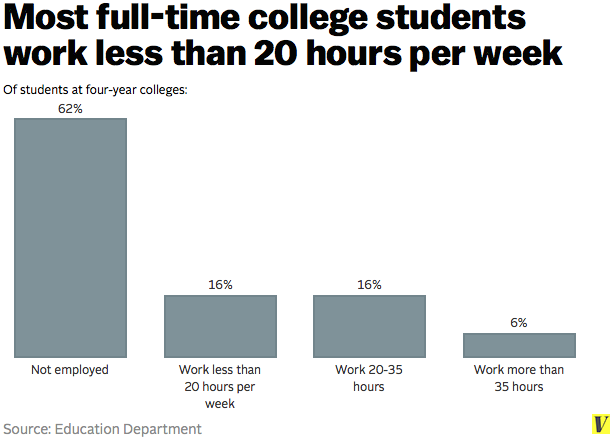 Attending part-time, though, also has its risks. It will take students longer to accumulate the 21 credit hours they need to get their tuition reimbursed. And students who attend exclusively part-time are less likely to graduate than peers who attend full-time or mix full-time and part-time attendance. At four-year colleges, more than two-thirds of part-time students drop out within six years.

Given that long list of caveats, it's not surprising that Starbucks told the Chronicle of Higher Education that the vast majority of employees' won't get more than $5,250 per year in tuition benefits. But if the company succeeds at turning college dropouts into college completers, policymakers won't hesitate to encourage other companies to create similar programs.

Correction: This article originally said Starbucks employees would be required to attend college full-time. That isn't a requirement of the tuition program, and several paragraphs have been changed to reflect this.