Share All sharing options for: Ghana has to ration electricity so that everyone can watch the World Cup

Some countries take the World Cup very seriously. Ghana, for one, is rationing electricity just to make sure everyone can watch its soccer match against the United States on Monday.

Zachary Seward of Quartz has the story: Ghana was already facing electricity shortages this year due to low water levels at its hydroelectric dams on the Volta River. And with lots of households planning to watch the World Cup on TV today, the government had to take even more drastic steps to make sure the grid held up.

So Ghana is importing 50 megawatts of power from the Ivory Coast, running its existing power plants at full blast, and slowing production at a massive aluminum plant to make sure there's enough electricity — and to avoid blackouts and shortages during a widely anticipated match.

Rural Ghanian students study with the help of a kerosene lantern in the evening. Many villages in rural Ghana lack electrical infrastructure, making it difficult for students to study in the evenings. Taylor Weidman/LightRocket/Getty

Of course, this isn't just a story about Ghana's World Cup devotion. It's also a stark reminder that access to electricity is a hugely pressing concern throughout Africa.

Add it all up, and some 590 million people across sub-Saharan Africa don't have any power at all. Among other things, that's a major public-health issue: Without electricity, many households turn to wood stoves, whose indoor pollution now kills 4.3 million people per year (worldwide), more than AIDS and malaria combined.

And even those who do have electricity don't have very much of it. As this chart from Todd Moss of the Center for Global Development shows, the average refrigerator in the United States consumes more electricity each year than the average person in Ghana: 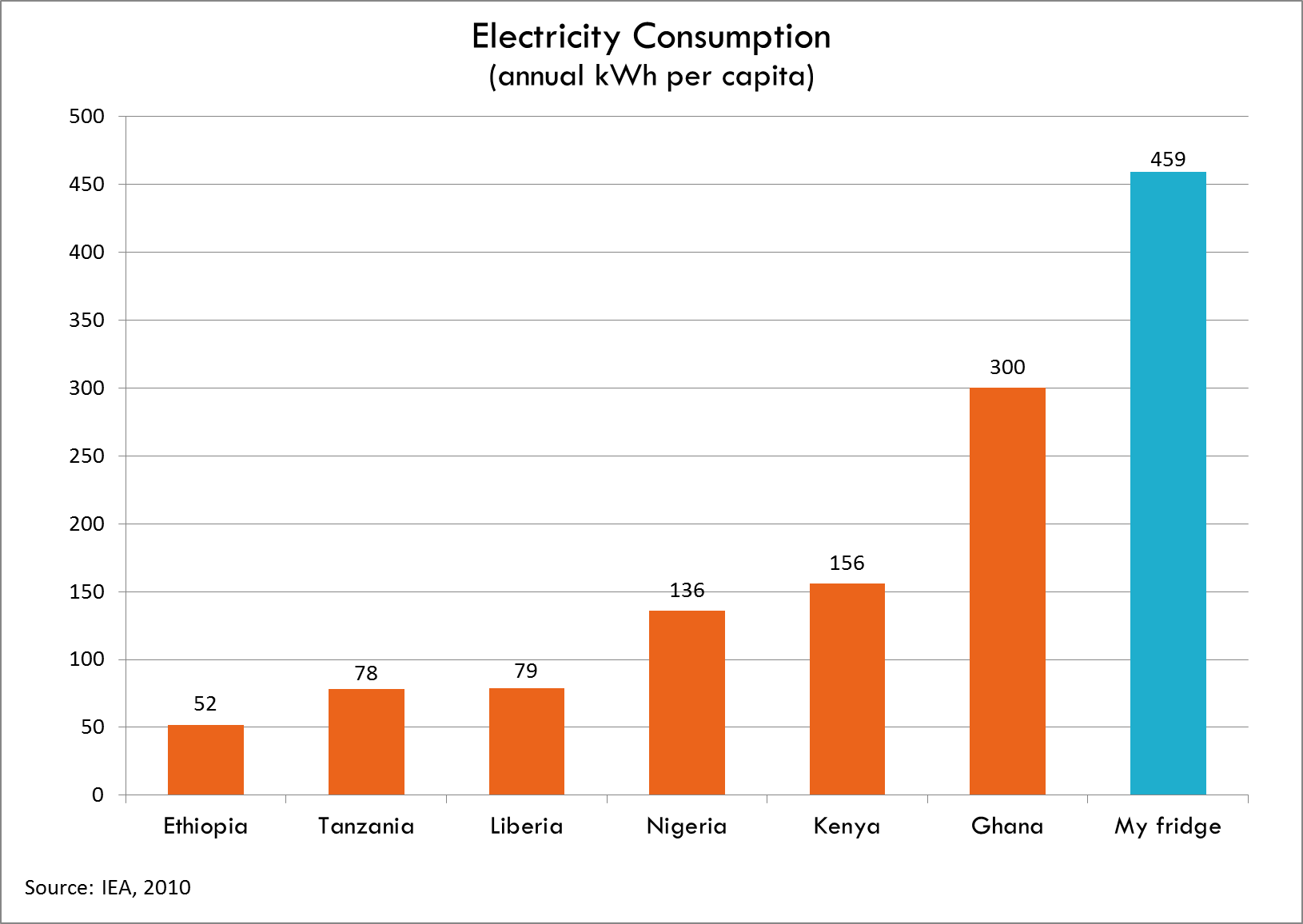 What would it take for Africa to get more electricity?

So what would it take to change all this? A lot. There are roughly 1.2 billion people in the world who lack access to electricity — and 590 million people in Africa. And that number is actually expected to rise in the years ahead, as electrification rates aren't keeping up with population growth.

One recent report from the World Bank and International Energy Agency estimated that it would likely take between $120 billion and $160 billion per year in investment over and above existing levels to bring energy access to everyone by 2030.

The report also noted that regulations and institutions would have to change in many poorer countries — a task that's often even harder than just finding the money.

What's more, the definition of "energy access" being used here is relatively stingy. To get all of sub-Saharan Africa up to, say, South African levels of electricity use (about 4,800 kwH per year — or 16 times as much as Ghana), for instance, would require an even bigger push. One study pegged that amount at 330 gigawatts of new capacity.

To put that in perspective, the Obama administration announced a grand plan last year to bring about 10 gigawatts of new capacity to households in Ethiopia, Ghana, Kenya, Liberia, Nigeria and Tanzania. Even if that plan succeeds, there's still a long, long ways to go.