We have a vaccine for whooping cough. So why's it an epidemic in California?

Share All sharing options for: We have a vaccine for whooping cough. So why's it an epidemic in California?

On Friday, the California Department of Public Health announced that whooping cough has reached "epidemic" proportions in the state. There have been 3,458 cases reported so far this year, more than the total number of cases for all of last year. The disease is cyclical, with a new spurt every 3-5 years or so after immunity from the previous outbreak wears off sufficiently. This year is on track to match 2010, the last epidemic year.

But 2010 was also the biggest year for whooping cough in California since 1947. In the country as a whole, the disease has seen a definite upward trend. At its trough in 1976, there were 1,010 reported cases of whooping cough; the number stayed in the low four-digit range for much of the 1970s and 1980s. But every year since 2003, we've seen tens of thousands of cases. That's way better than before vaccines, when we regularly saw hundreds of thousands of cases every year, but the trend line is disturbing: 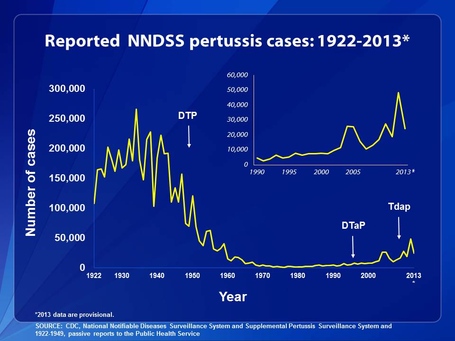 Chart courtesy of the CDC

Whooping cough isn't usually fatal but it's brutal nonetheless. Here's how the New Republic's Julia Ioffe describes her experience with it:

At this writing, I have been coughing for 72 days. Not on and off coughing, but continuously, every day and every night, for two and a half months. And not just coughing, but whooping: doubled over, body clenched, sucking violently for air, my face reddening and my eyes watering. Sometimes, I cough so hard, I vomit. Other times, I pee myself. Both of these symptoms have become blessedly less frequent, and I have yet to break a rib coughing—also a common side effect.

It's hard to blame any single cause for public health problems like the recent rise in whooping cough, but it's clear that anti-vaccine activists aren't helping. Researchers at Johns Hopkins, Emory, and the California Department of Public Health found that California communities with large numbers of parents claiming "nonmedical exemptions" from vaccines from their kids (that is, parents who don't vaccinate for religious, personal, or other reasons not backed by medical professionals) were 1.73 times more likely to see outbreaks of whooping cough; another study looking at Michigan found high-exemption areas were 2.7 times as likely to experience high levels of the disease. Those are infections we could very, very easily prevent if parents stopped listening to anti-vaccine nonsense and started taking the health of their kids (and their kids' classmates and friends) seriously.

Want to know more about the dangers of anti-vaccine disinformation, and the benefits of vaccines? Check out the video below I did with Vox video director Joe Posner, animator Estelle Caswell, and sound whiz Shay Lynch. Also be sure to read German Lopez's outstanding cardstack on the vaccine controversy.