The claim: food trucks are as safe as restaurants

Share All sharing options for: The claim: food trucks are as safe as restaurants

Food trucks are just as safe as restaurants — and, in many cases, safer.

In many cities, food trucks receive fewer citations for safety on average

That's the conclusion of a new report by the Institute of Justice, a Virginia-based libertarian law firm. The group found that food trucks and carts don't receive any more citations for health-safety violations than restaurants do. In fact, in most of the cities studied, the trucks actually did better.

Why does that matter? Over the past few years, as food trucks have expanded and grown in popularity, they've also faced stiff resistance from urban policymakers, with rules that restrict where and when they can operate.

Some of those restrictions have centered on food safety. In New York City, for instance, every single food-truck employee needs a health department license, which can take up to two months to receive. That's stricter than the rules for brick-and-mortar restaurants, where only one person on each shift needs to be certified.

The claim: food trucks are safer than restaurants

The Institute for Justice report, for its part, argues that restrictions on where food trucks can operate aren't going to make people any safer. That's because across the seven US cities it studied, food trucks were no more likely to get cited for food-safety violations than restaurants — and, in many cases, they were actually less likely to get citations: 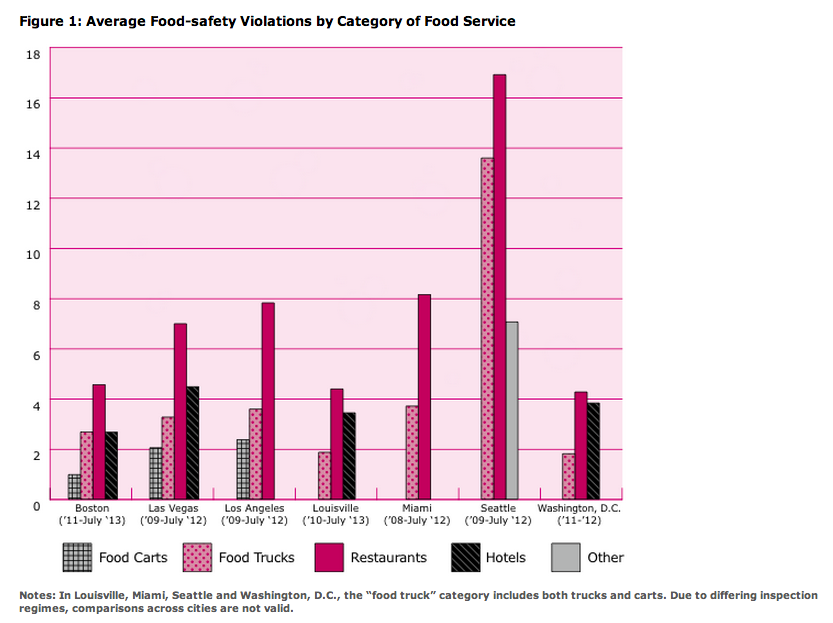 Food carts and food trucks had fewer food-safety violations than brick-and-mortar restaurants. Because food safety rules are done on a local basis, comparing across cities doesn't really work. So no, there's not necessarily something especially bad going on in Seattle. The Institute for Justice

In six of the seven cities studied — Boston, Las Vegas, Los Angeles, Louisville, Miami and Washington, D.C. — food trucks and carts did significantly better than restaurants. In Seattle, there was no statistical difference.

The report analyzed 263,395 food safety reports in cities where food trucks and restaurants have to follow the same rules. That allowed for the most straightforward comparison. The authors controlled for the day of the week, season, and year of the inspection (to account for things like variation in customer traffic, weather, and pests).

For Seattle and Washington, DC, the authors also controlled for how risky the food was, so that — for example — a truck serving nothing but ice cream or prepackaged cold sandwiches wouldn't have an artificial advantage over a restaurant serving nothing but tuna tartar. (Or vice versa.)

Why are food trucks doing better?

This is pure speculation, but it's possible that the intense scrutiny of food trucks is leading to better outcomes. If so, the data could possibly support more regulation of food establishments, not less.

Are there reasons to doubt the study?

It's possible that because food trucks tend to run smaller, less complex kitchens, they have fewer opportunities to violate the rules. But they might not be better on a per-meal basis.

Also, safety violations is a handy indicator, but it isn't the same as having actually been less safe for customers. A more direct measurement of safety would be reports of actual illness.