Share All sharing options for: 11 facts about US teachers and schools that put the education reform debate in context

The judicial ruling in California striking down teacher tenure policies has put K-12 education policy back in the news. The debate over teacher compensation and job security and its relationship to student performance is incredibly bitter and divisive, featuring two competing sides with drastically competing narratives and visions of education. One good place to start with the issue, however, is with some basic facts. Here are eleven.

1. Teachers earn a bit more than the average American 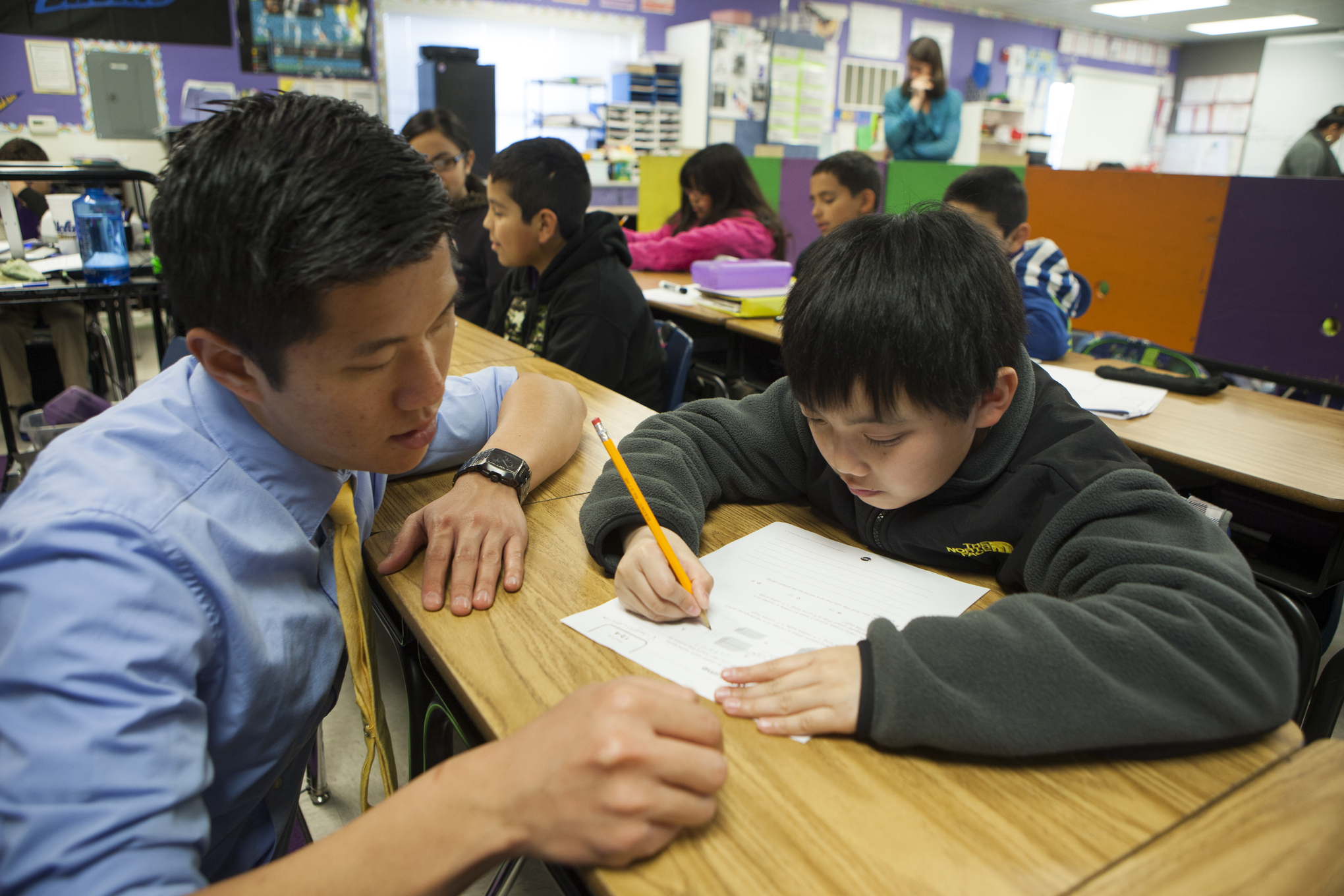 The median annual earnings for an elementary school teacher are $53,590 and for a high school teacher it's $55,360. Median household income in the United States is about $53,046 and many households have more than one worker so teachers have above-average earnings. Then again, teachers also have an above-average level of education. Direct comparisons are difficult because teachers work an unusual schedule and also generally receive pension benefits that have become rare in American workplaces. 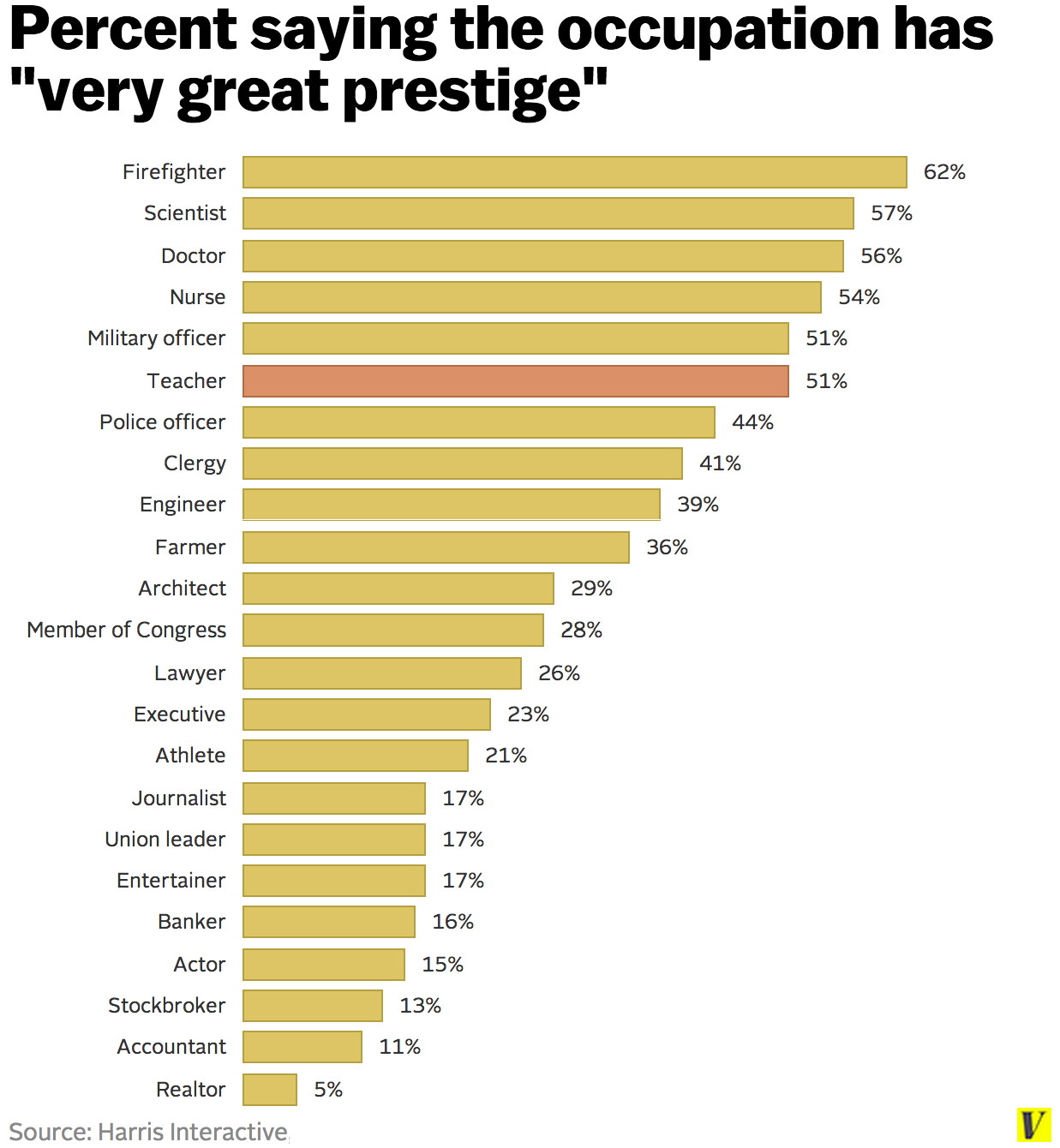 Harris Interactive sporadically polls the public about which professions they regard as prestigious and teaching comes out near the top. Compared to other public service or social service careers, teaching looks less good ranking behind health care occupations, firefighting, and the military. But teachers are much better-regarded than the journalists or politicians who may criticize them. 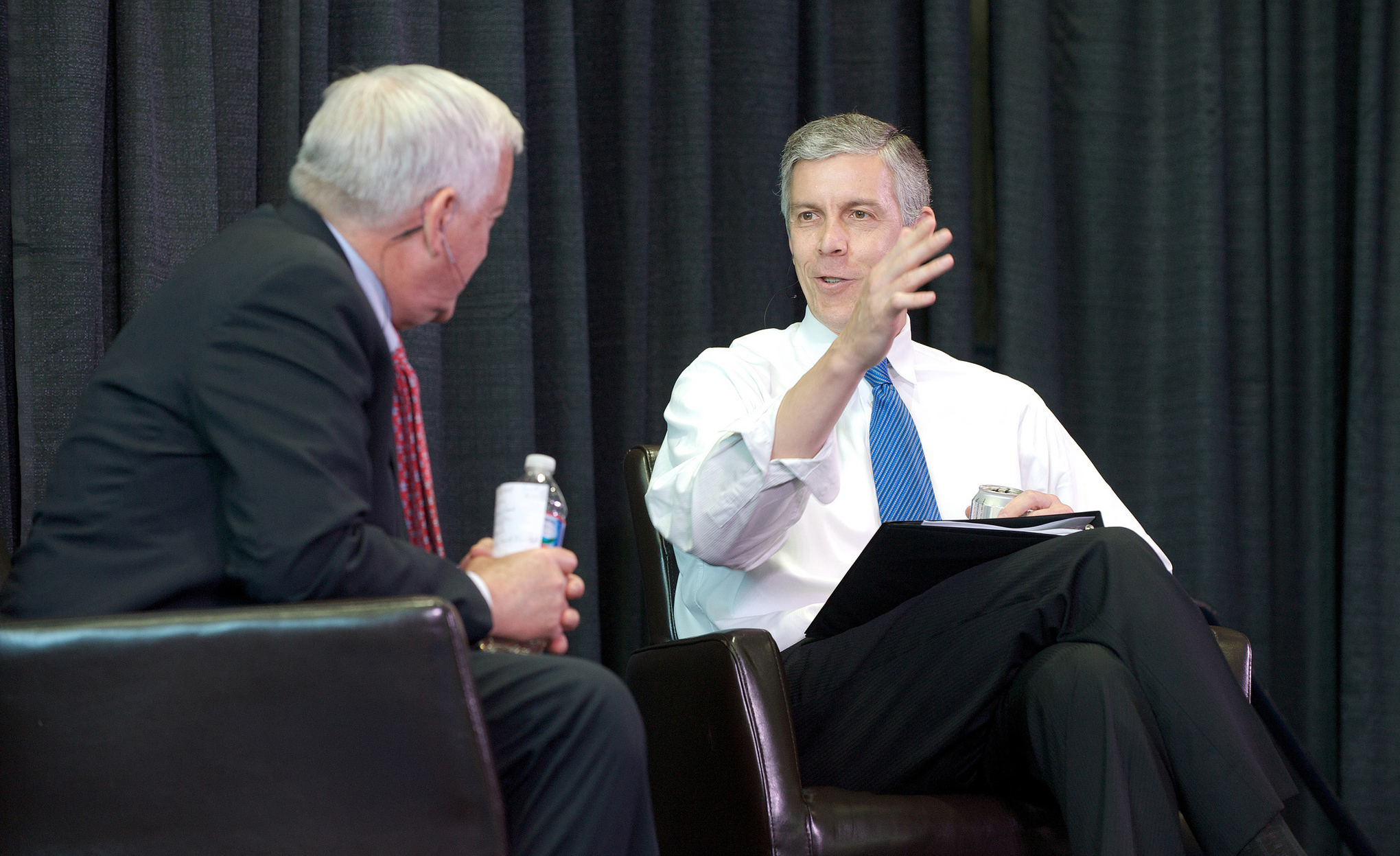 A 2010 McKinsey report noted that "only 23 percent of new teachers overall — and about 14% of those in high-poverty schools — come from the top third of college graduates" as measured by their college entrance exam scores. By contrast, about half come from the bottom third.

This is a stark contrast to the situation that obtains in countries who have the best-performing schools on international tests. Specific educational policies in places such as South Korea and Finland are quite different, but in the best-performing countries teachers are overwhelmingly drawn from the top third of the distribution.

4. Absolute teacher salaries are high in the US 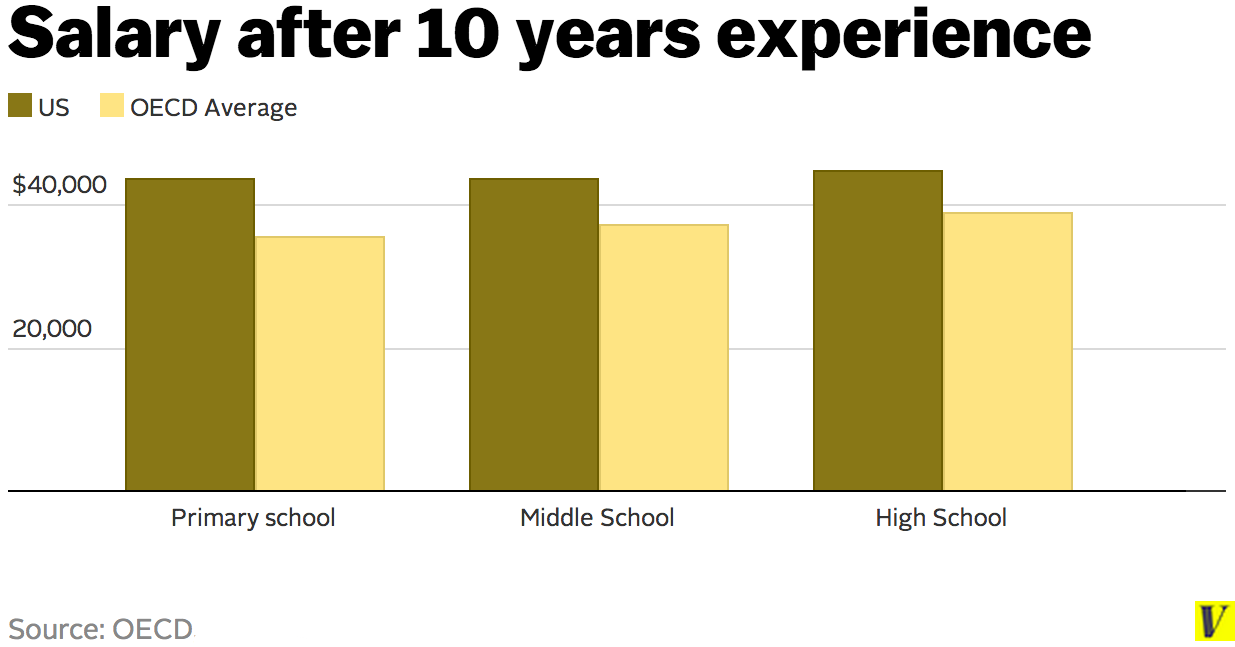 According to the latest OECD data, salaries for American teachers are high at all levels compared to the average of rich countries. That's true for starting salaries, true for maximum salaries, and true for the averages at both 10-years and 15-years of experience.

5. Relative teacher salaries are low in the US 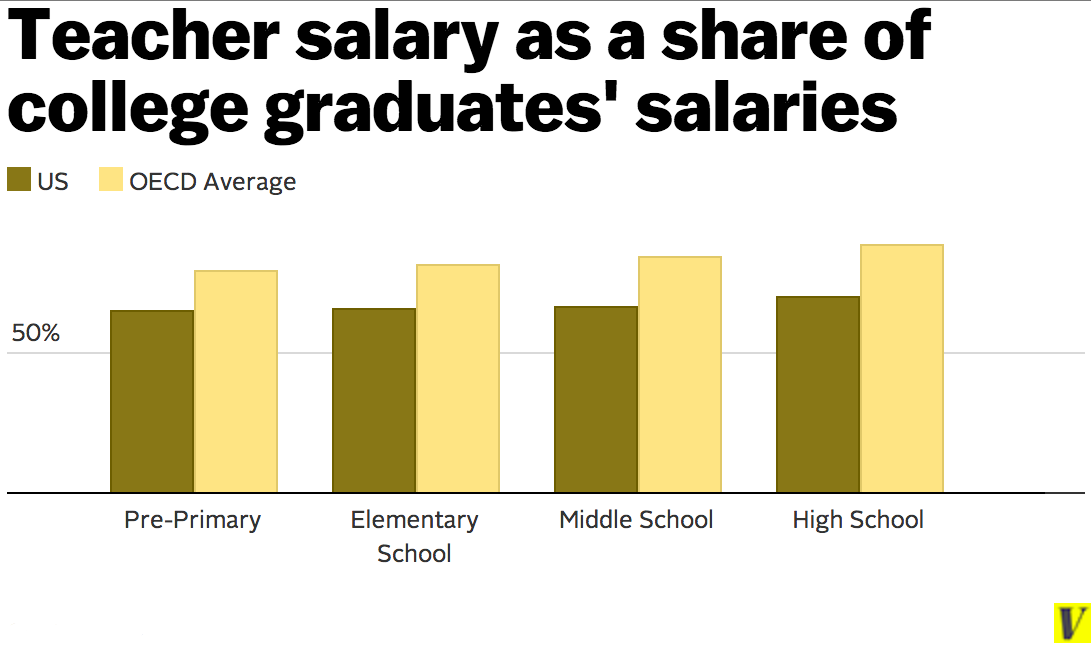 6. Some teachers are much more effective than others 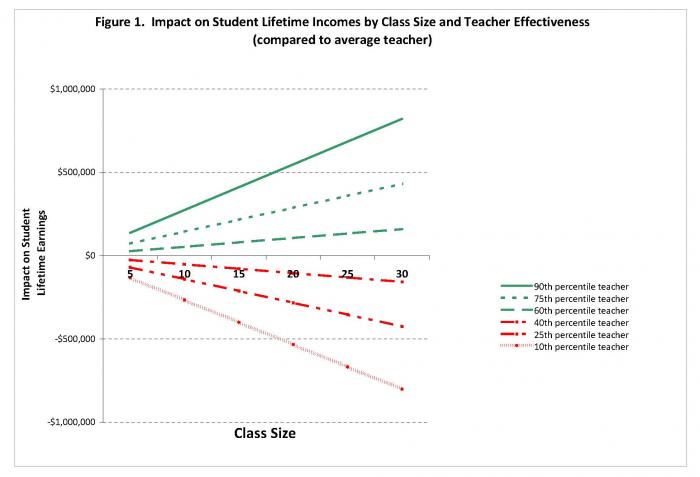 There is more to life than standardized test scores, but students of teachers who are good at improving their students test scores do better on a wide range of life outcomes. Such fortunate students have higher earnings than demographically similar peers whose teachers were less effective, and they are also more likely to attend college and less likely to become pregnant as teenagers. Most teachers' impact on their students life trajectories is about average, but the top ten percent and bottom ten percent of teachers generate outcomes that differ widely from the average.

Today's children attend schools that have substantially lower student-teacher ratios than the schools attended by baby boomers. Many experts are skeptical that this has been money well-spent, since all else being equal increasing the number of teachers tends to decrease the average quality of the teaching corps.

8. The teaching workforce is disproportionately unionized 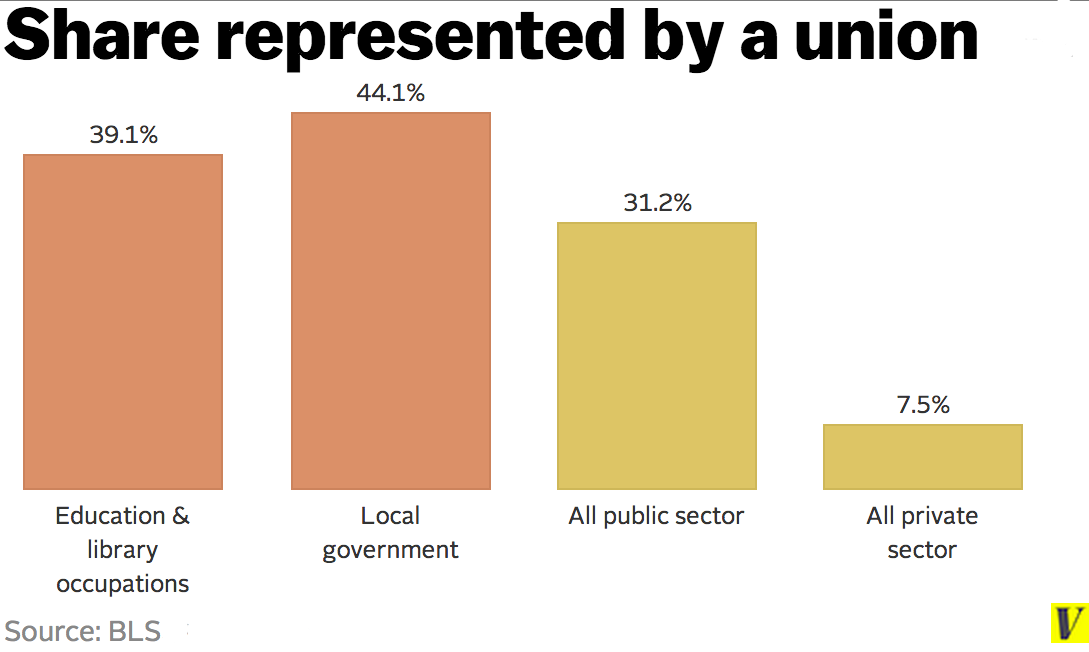 The Bureau of Labor Statistics' methodology doesn't let us quite say what share of public school teachers are represented a labor union. But we can see that people with jobs described as "Education, Training, and Library Occupations" are heavily unionized. Slicing things up by employer-type rather than occupational category, we see that people who work for local governments are also heavily unionized.

A heavily unionized teaching workforce is not particularly unusual in worldwide terms. But in European countries, teachers unions are strong in places where unions in general are strong. The American setup where union membership is rare in most fields but common in teaching is unusual.

As this map made by National Public Radio from Census Bureau data shows, states spend wildly divergent amounts of money per student. Spending is broadly highest in the Northeast and lowest in the Mountain West but there's considerable variation. 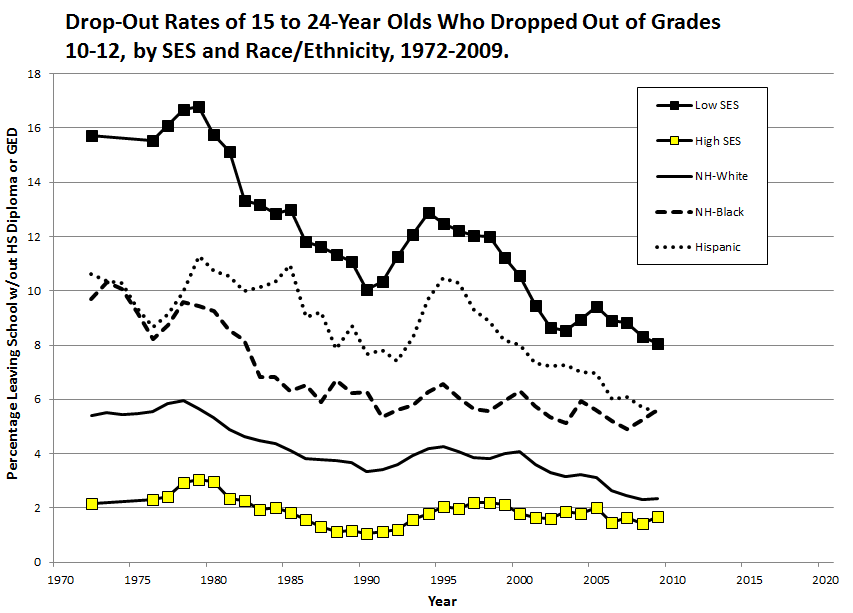 After soaring in the early 1990s, the high-school dropout rate began falling again. The rise in high school completion is broad, but especially concentrated among Latinos and students from low-socioeconomic status families. 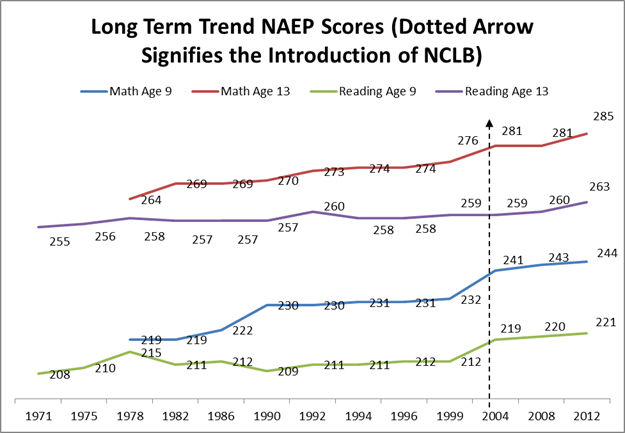 Source: Foundation for Excellent in Education

National Assessment of Education Progress scores have been on a slow-but-steady upward trajectory that has continued through controversial changes made to education policy starting with the No Child Left Behind Act. Both sides in the debate tend to paint a dire portrait of the overall situation — with either reformers or unions cast as the villains — but the actual trend lines are positive.