Children use more drugs when their parents are strict

Share All sharing options for: Children use more drugs when their parents are strict

Want to stop your children from smoking pot? Don't be a tyrant, and pay attention.

A recent study looked at how different parenting styles affect different behaviors. By analyzing survey results, Spanish researchers concluded that the strictest and most neglectful parenting styles correlated with a lot more illicit drug use than balanced and indulgent styles.

In other words, the key to preventing drug use could be a kind and affectionate approach to parenting.

When it comes to parenting, it's better to be too kind than too strict

The researchers then scored different outcomes — alcohol use, tobacco use, illegal drug use, self-esteem, school performance, personal disturbances — based on the survey's findings. These scores were applied to four parenting styles established in previous research:

What researchers found, regardless of the country, is that parenting styles that focused more on affection (indulgent and authoritative) seemed to perform much better across the board than those that simply set strict limits (authoritarian) or no limits (neglectful).

The indulgent style, for instance, correlated with drug use at about the same rates as a balanced authoritative style, while authoritarian and neglectful styles did much worse. 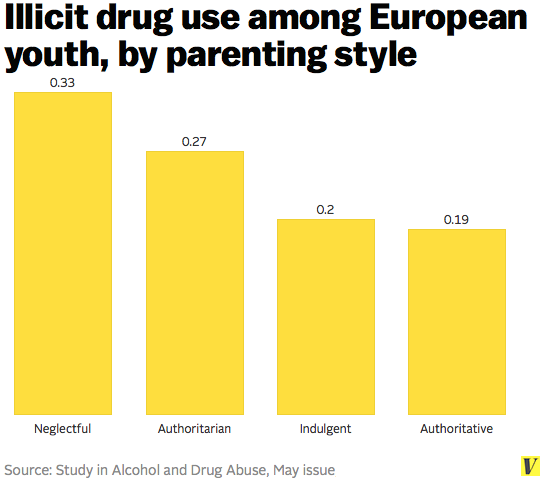 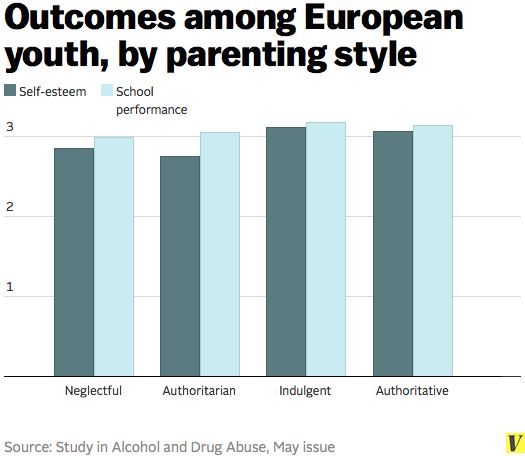 The findings don't apply to everyone

The survey's results don't apply to every parent or child around the world.

For one, the survey focused on European youth. Previous studies on parenting styles have found that different cultures respond differently to parenting styles, with Asian and black youth in particular showing better results in some instances toward authoritarian parenting. So it's unclear how different parenting styles would affect every American family.

The study also establishes correlation, not causation. It's possible, for instance, that parents respond to more adolescent drug use with stricter tactics. That would be a far cry from stricter parenting directly causing more drug use.

Still, the results are fairly consistent across all countries. Whether it's the Anglo-Saxon United Kingdom or Mediterranean Spain, the same principles seemed to apply.

Given the findings, it might be a good idea for parents to show some affection in between all that disciplining.