Share All sharing options for: Maybe we don't all need annual physicals

The annual exam is one of the most common and encouraged procedures in modern medicine. Whether it actually helps people get any healthier, however, isn't completely clear. Earlier this month, Michael Rothberg wrote an article for the Journal of the American Medical Association questioning the traditional exam and its role in the medical system. Much of the article centered on his father's experience a decade ago, when an annual check-up triggered a number of follow-up tests that cost $50,000 and ended up doing more harm than good.

"Almost nothing in the complete annual physical examination is based on evidence," Rothberg, who directs the Cleveland Clinic Medicine Institute Center for Value-Based Care Research, wrote. "Why, then, do we continue to examine healthy patients?"

Rothberg says that this JAMA piece generated more feedback from doctors than all the other articles he's previously published combined. We spoke about the role of the annual physical, whether it plays a valuable role in the medical system, and what could be done to improve the regular encounter with a physician. What follows is a transcript of our discussion, lightly edited for clarity and length.

Sarah Kliff: How you think about the annual physical? Whats its role?

Michael Rothberg: What I was trying to get at in this article had to do with the dangers of looking for problems when patients don't have any complaints. I definitely didn't want people to come away thinking you should never examine a patient or that patients shouldn't go to the doctor. The point I was trying to make is that our ability to pick up disease through a physical exam when patients don't have any complaints is a misconception that we've fostered for the last fifty years.

SK: What do you think about the body of evidence we have on annual physicals, and whether they improve health outcomes?

MR: There are wellness exams for Medicare patients who are generally 65 and older, which don't actually include much of a physical exam. Then there's probably a corollary for younger patients as well. There are a few different components to it, and one would be that piece of looking for diseases that may not be apparent to the patient. One of the easiest tests is checking blood pressure, because we know undiagnosed hypertension is an important problem. That's very easy to detect, as is obesity. For women, it's also important to get screened regularly for cervical cancer.

In terms of evidence though, I don't know we have evidence one way or another about whether you need to go to a physical exam to do this. Let's say you're 35-years-old and you have a scale in your home, and you can check your blood pressure at the grocery store. I'm not sure you need an annual visit to the physician. You're very unlikely to have any serious diseases that haven't shown symptoms. For older patients, there are additional benefits that make annual visit worthwhile, like reviewing medications, doing appropriate screening tests, getting vaccinations, having your vision tested, and discussing preferences for end of life care. These are all covered by Medicare. 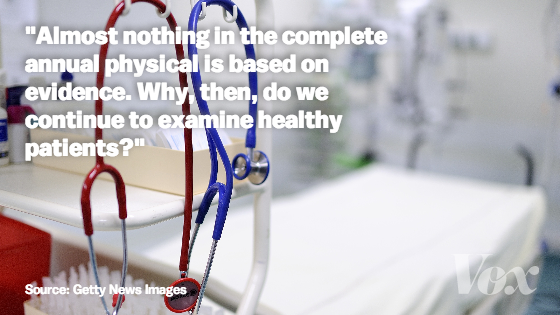 There is also the argument that you should develop a therapeutic relationship with your provider, so that when you do get sick, you'll have somebody who knows you. This is important if you have a chronic disease, but it doesn't seem like its a great argument for young patients. What are the chances that when you do become sick, that you'll still have the same insurance and you'll be able to get an appointment with that same doctor? It sounds like it makes sense, but I don't know if that's often how it plays out.

SK: One of the things you wrote about in your JAMA article is that often, among your colleagues, you get the reaction of "well, what's the harm?" And one of the things that was interesting about your piece, is you went through a situation where there really was a harm from one of these types of appointments.

MR: It goes back to this idea of trying to catch disease early and potentially save lives. We want to be able to say, "I saved somebody's life because I recognized something they didn't recognize."

But in our search as doctors to discover these things, we encounter a lot of other things that we don't know the meaning of. That was the case in my father's situation. His doctor thought he discovered an aortic aneurysm through the physical exam. That's something that you really do have to capture early, before it ruptures. So if you find it early, that's really great.

Then there was an ultrasound, that showed there wasn't an aortic aneurysm but he saw something in the pancreas. So then we thought, well maybe we luckily discovered pancreatic cancer. The doctor then recommended a CT scan, which showed he didn't have pancreatic cancer but it looked like he might have liver cancer. So we had a biopsy for that. My father was in reasonably good health and the biopsy almost killed him.

This all started with a routine physical, and you can't say there was any benefit to him with anything that happened.

SK: Does this happen a lot in medicine? If you imagine a situation where one of these medical conditions actually proved to be real, then this story would look very different. How should doctors decide when these tests are a good idea, versus something like a wild goose chase?

MR: I think it all comes down to what is the probability, pre-test, that you would actually have the thing we're testing for before we go looking for it. One thing people don't understand, is they think we have a better ability to understand what's going on in scan images than we actually do. That's where a huge disconnect is. There's this belief that we can see into the body and know what's going on.

people 'think we have a better ability to understand what's going on in scan images than we actually do.'

There are companies out there that offer full body CT scans. And they find things. They find thyroid nodules and adrenal masses. They find abnormal areas of the liver or the spleen. They find lung nodules and ovarian cysts. The problem is what do you do next? You can't make the diagnosis based on the image. Usually you have to get tissue and that means either surgery or at the very least putting a needle into the thing and taking a sample. Even after you have the biopsy you don't always know. The more we look the more anxious we become and the more aggressive about finding an answer.

On the other hand, we have some tests that we know work. Screening for cervical cancer with Pap smears has almost eliminated cervical cancer in women who go for screening. Colon cancer screening is also very effective, but we have a hard time getting patients to go for it. And of course, if you have a concerning symptom, it needs to be addressed.

SK: We seem to have a mentality in situations like these of "better safe than sorry," that it's okay to do these extra tests and do annual exams that might not necessarily show much benefit, rather than risk missing something.

MR: We have this with a lot of different kinds of cancer. Thyroid cancer fits this category. We detect it by finding thyroid nodules and we're now really good at finding those nodules. When we biopsy, we now detect cancer 5-10 percent of the time. We're diagnosing a lot of people with thyroid cancer who wouldn't have been diagnosed before. But despite the fact that we are treating a lot more people with thyroid cancer, the number of people dying from thyroid cancer hasn't really budged. That implies that the extra cases we are finding didn't benefit from treatment.

My sister went to a doctor for an exam when she was around 40. Her doctor did a very thorough physical exam and found a lump in her thyroid. He sent her for an ultrasound that showed several thyroid nodules. They decided not to biopsy, but put her on thyroid medication to try and keep the nodules from growing, and she had an ultrasound every six months. She did this for a number of years, and it cost thousands and thousands of dollars. Finally, she started asking about the potential harms of the medication. And it turns out it could cause osteoporosis. She asked me why she was taking it, and I told her I really didn't know. So she decided to stop, and 15 years later there hasn't been a problem.

SK: What do you think the proper role of the annual physical should be for people who don't have medical complaints? Is there value at turning up at the doctor on a regular basis?

'for people who are truly healthy...those people are probably good to go without these exams until age 50'

MR: For people who are truly healthy, who understand what it is to have a healthy lifestyle, those people are probably good to go without these exams until age 50. They do need to have an annual blood pressure check, and there are some vaccines that you need to get regularly, like tetanus. I don't think its a bad idea to check in with the medical system, but it's really the physician's responsibility to limit contact to things we know are based in evidence.

There are so many things they can determine through a visit that doesn't really happen with the physical exam itself. I think its good for people to have a doctor, because sometimes you're really just looking for an expert to give advice. It may not change our outcome, but having someone to reassure you can be a big help.

SK: What's the reaction to this piece been like so far?

MR: I got more responses to this than everything else I've ever written put together. Most of the emails were positive and brief, saying you've said exactly what I've been thinking for a long time. There were some people who wanted to go even further. A few people were upset about the fact my father had gone for a biopsy, and said he shouldn't have done that. But overall, it was a really positive reaction.