It looks like Obamacare shoppers will have more choices when they start looking for coverage in 2015.

States are just now beginning to publish information on which insurers plan to sell on their health exchanges next year. In the seven states that have so far made that information public, all but one have an increase in the total number of insurers who want to participate in the new marketplace.

Dan Diamond at the Advisory Board pulled together many of these insurers' filings, and they show a strong trend of insurers getting more bullish on Obamacare in year two. 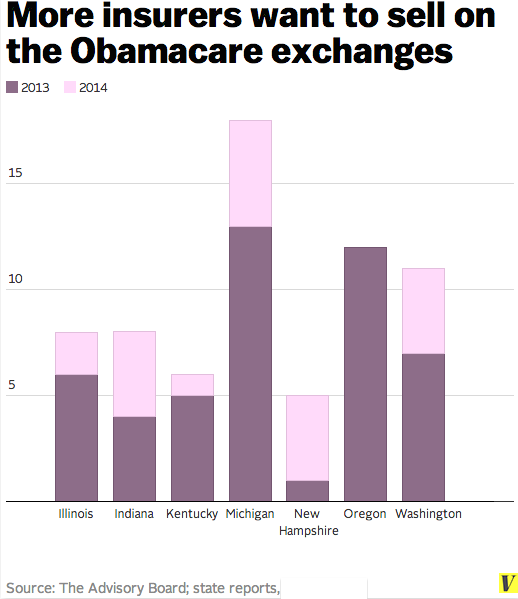 This trend isn't a total surprise. Many insurers — especially the large, national companies — strategically took a cautious approach to the health insurance exchanges in 2014. "

They didn't have much of an idea what they were getting into. Insurers didn't know how much their competitors would charge, for example, or what type of consumers would sign up. There were also worries (later proved completely founded) that the shopping experience would be messy in year one.

It's not just new entrants into the exchanges that's increasing competition. In Washington, for example, there are two plans that only sold in small parts of the state that now want to sell everywhere. Both United Health Care and Moda, a local plan, are increasing the geographic area of where they plan to sell coverage.

The only state that hasn't reported an increase in carriers for 2015 is Oregon. There, all 12 carriers who sold in 2014 plan to sell again in 2015, but no new insurers have proposed rates. It's possible that this has to do with Oregon's incredibly challenged Obamacare rollout — or it could reflect the fact that Oregon had one of the most competitive Obamacare markets to begin with.

More nationally though, the trend seems to be clear: More insurers are getting into the Obamacare game in year two.