The conservative base has a crippling aversion to governing

Share All sharing options for: The conservative base has a crippling aversion to governing

Harry Enten at 538 offered a fascinating take on Eric Cantor's defeat earlier this week. It concerns a somewhat arcane issue in quantitative political science, but it raises a more fundamental question — how will the next Republican Party majority be able to govern the country? Or, rather, it suggests that they won't be able to govern.

But first the political science.

The currently favored method of assessing legislators' ideology is something called DW-NOMINATE, which sucks in every vote cast in every congress and then algorithmically arranges legislators in a two-dimensional ideological space. Because the process is purely mechanical, it's totally unbiased. But it also requires human interpretation to say what it means. The overwhelming consensus is that the most important axis should be understood as reflecting left-right ideological conflict over the appropriate scope of government intervention in the economy.

But there is also a second axis that's typically less significant. In the mid-20th Century, this axis seemed to clearly represent racial issues. Southern politicians with diverse positions on the main axis clustered together on the secondary axis, joined by a clutch of economically conservative northerners.

Today's second axis, however, is harder to interpret. It doesn't represent "social issues" like abortion and gay marriage because legislator beliefs on those turn out to be highly correlated with economic issues (i.e., Susan Collins is pro-choice and also voted for the stimulus). 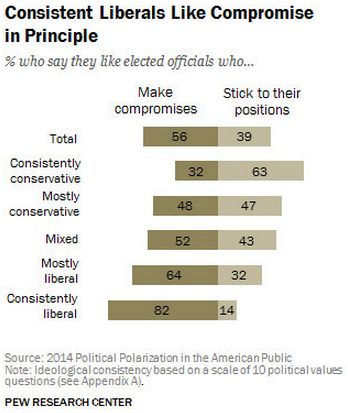 Enten's conjecture is that it represents an "insider/outsider" dynamic. His key finding is that while Cantor is quite conservative on the main axis, he also scores as very insidery. And he further finds that insiderishness is a quantitatively important predictor of when Republicans lose primaries.

Add to this a point Jonathan Chait makes about some recent Pew data.

Conservative voters have decided that the idea of compromising is something that they are against. Liberals, by contrast, believe that political leaders should try to cut deals.

This seems highly linked to Enten's finding. The way American politics works is that to pass a bill requires you to overcome an enormous quantity of chokepoints.

That means that, in practice, if you want to do things you end up needing to make compromises. That doesn't mean abandoning your principles, but it does mean trimming your sails. To get things done, you either need to accept half a loaf or else you need to trade one of your priorities for the other guy. That's what GOP congressional leaders have done from time to time because it's really the only thing a leader can do. But conservatives don't like it because conservatives don't like the idea of dealmaking. And since they've shown their ability to punish legislators who make deals, future Republican leaders will be even less inclined to make them.

For the next two years that means gridlock.

But what about after that? The practical political imperative for political leaders to make deals won't go away after the 2016 election. Ronald Reagan had to cut deals to pass his agenda in 1981. Democrats won a landslide victory in 2008, but Barack Obama's signature legislation from 2009 and 2010 involved plenty of dealmaking. Whether you like this aspect of the American constitutional order or not, it isn't going to vanish. Whether it happens in 2016 or 2018 or 2020 or whenever, there's going to be a Republican electoral sweep one of these days.

But unless this new anti-deal aspect of conservative ideology vanishes, it's not going to be able to govern at all.