Share All sharing options for: A brief history of men's short suits

For the past few years now, fashion editors have been urging men to ditch their trousers and slacks and show a little leg by putting on a daring shorts suit. But most men — save for a few dandies and Pharrell — have been reluctant, even though wearing a suit in summer can be an awful experience.

"I love the spirit of it," Michael Bastian, a New York-based designer, told the New York Times earlier this year when asked about Pharrell wearing a shorts tuxedo to the Oscars. He stopped short of giving the piece his full endorsement. "But I don’t know. There’s something sacrosanct about being invited to a formal occasion."

This week, J.Crew upped the ante on the shorts suit battle when the retailer announced it would be selling shorts suits to everyday men — a move that may end up starting a trend. With the battle over this sartorial choice as hot as ever, it's time you get acquainted with the great shorts suit debate of 2014.

As the name implies, a short suit is at root a suit — a piece of formal wear that consists of a jacket, slacks and sometimes a vest — that incorporates a pair of shorts instead of pants. 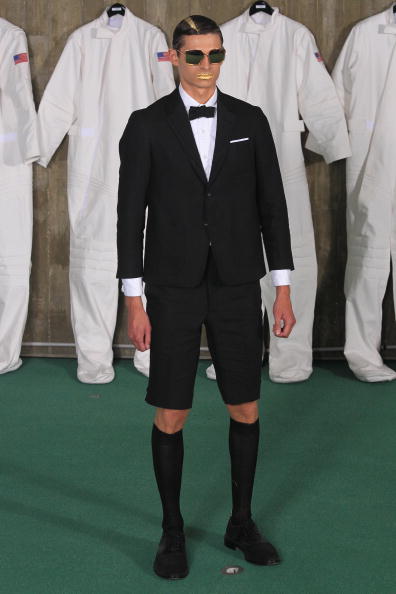 Shorts suits have actually been around for a while. For some reason (perhaps because of the headway made by skirt suits), shorts suits aren't as controversial when women wear them, and they've been an accepted trend in women's fashion for quite a while.

You can trace shorts suits to breeches, a form of short men's formalwear from back in the day. Breeches, which men wore between the 16th and early 19th centuries, typically stopped right at the knee; they were usually fastened. 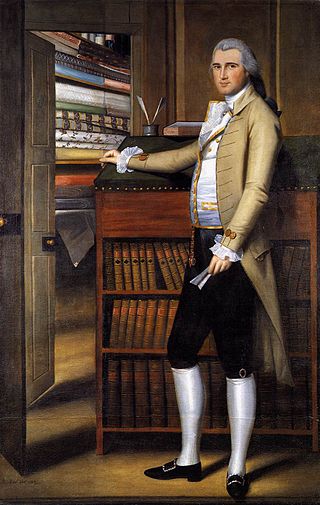 Breeches were also hit in France at the time, where they went by the name culottes. In France, those who wore culottes/breeches were nobility. The working class in both France and in America opted for trousers. During the French Revolution, the more extreme, left-wing partisans were called the sansculottes (or sans-culottes).

Meanwhile, in the early 1800s, a man named Beau Brummell updated formalwear to what we now consider a suit by pairing the waistcoat with trousers. Ready-made suits, a staple for the working class, were being produced in the 1820s, all but spelling the end for breeches.

But the end of breeches didn't mean the doom of shorts suit and short formalwear. Knickerbockers had their fashion moment, and shorts suits started to appear in prep school uniforms, particularly with young boys. In 1930, the Argentinean soccer team wore short suits at the World Cup final: 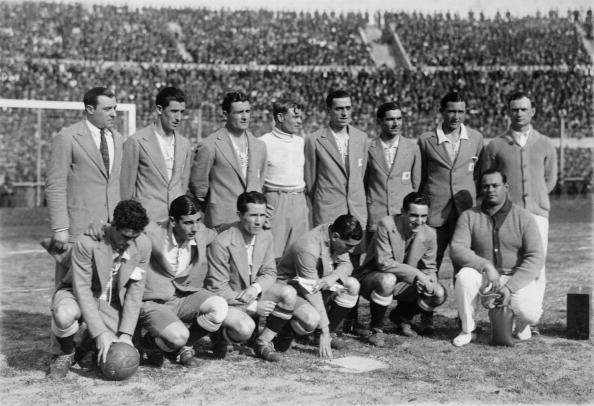 The current wave of short suits

More recently (in this century), the trend toward shorts-suits has been powered by a designer named Thom Browne.

Browne burst onto the scene in 2006, when he was named menswear designer of the year by the Council of Fashion Designers of America — one of the most prestigious awards you can get in the fashion industry (he won the award again in 2013). Browne was and still is known for playing with the proportions of men's suits (he sent breeches down the runway in 2011), like this one which he sent down the runway in 2007: 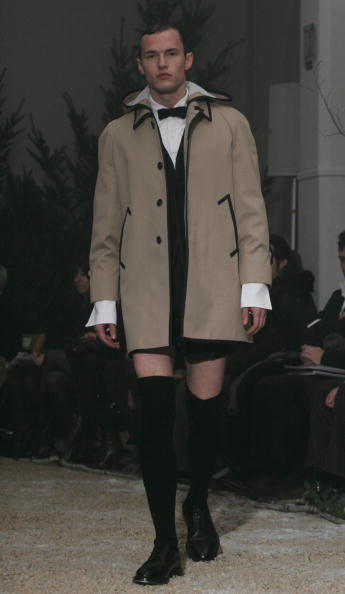 And here's another shorts-suit combination from Browne's fall/winter 2015 collection this year: 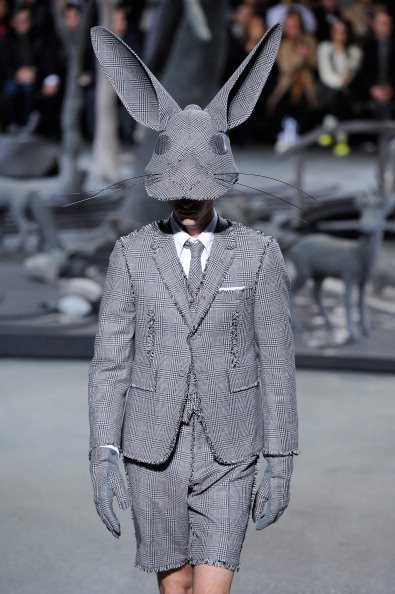 Browne is such a firm believer in shorts suits and short suits, that he doesn't just design them. He wears them too: 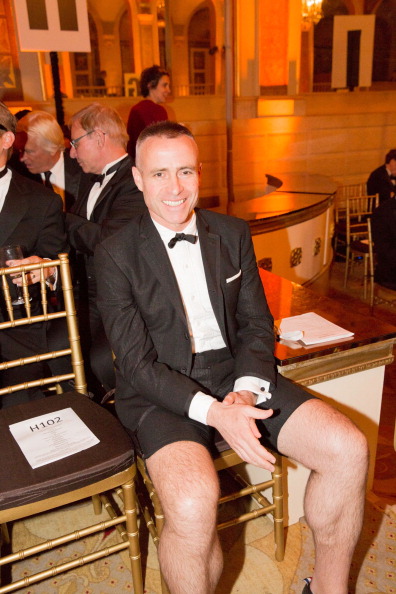 Men's fashion magazines have helped advance the trend too. Editors at places like British GQ, Details, and the New York Times are paid to pay attention to designers like Browne and what they're doing. That's led to a recent spate of articles like "Blazers and Shorts are the New Summer Suit" (2013) or "Best shorts suits" (2010) or "Should the Calf be Put out to Pasture" (2014). In 2008, The New York Times ran a Styles section piece for the shorts suit.

And you also have fashion-forward celebrities wearing shorts suits. Pharrell wore one at the Oscars this year: 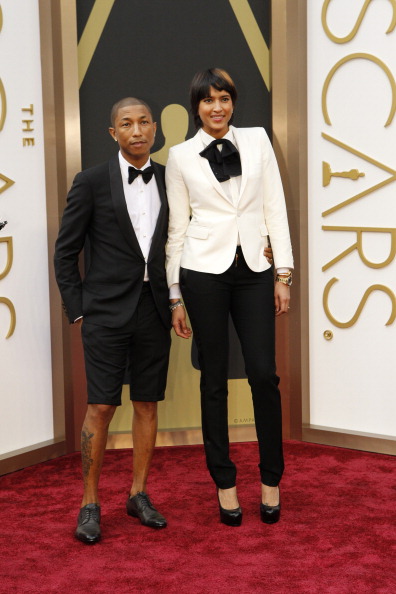 Why short suits are blowing up now

Of course, many men don't take their cues from GQ or Details — the suits featured in those magazines are pricey. And not everyone looks to Pharrell as inspiration.

This is where more mainstream designers fit in. J.Crew, which sells fashion that's more accessible to the average American, is selling four shorts suits this season: 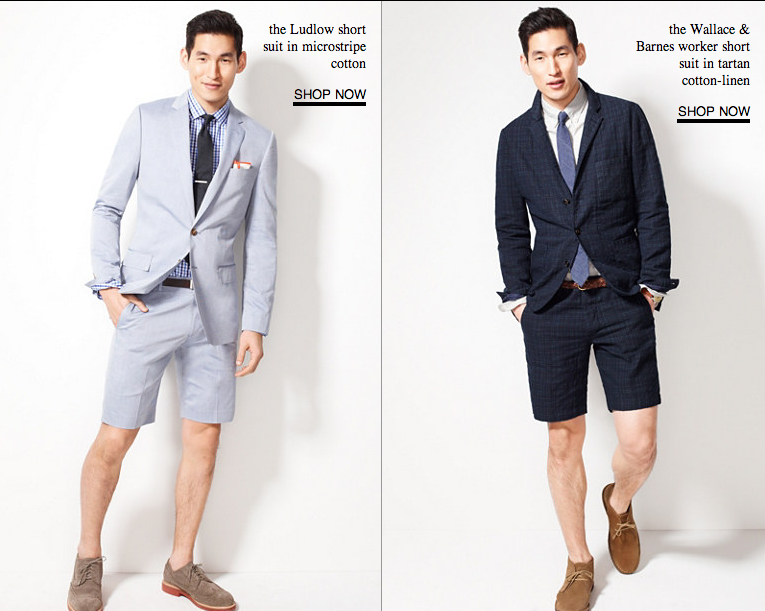 You can sort of see how Browne's influence trickled down into J.Crew's shorts suits. Because J.Crew, a retailer for the everyman, jumped on the trend, a few business and fashion journalists at places like Businessweek, The Houston Chronicle and NPR began covering its emergence and possible trendiness.

So should you wear a short suit? Publications have broken into opposing camps, with GQ, Details, Esquire, NPR, The New York Times, and The Guardian in favor and The Washington Post's Jonathan Capeheart and Deadspin very, very much against.

It also appears that Americans have had the central idea here since well before Browne got on the scene. Though, their motivation might be more utilitarian— they are looking to beat the heat. Looking at the Google Trend analytics for people searching "shorts suits", you'll notice that it has been spiking every summer:

This one is no exception.