The single most important fact about American politics

Share All sharing options for: The single most important fact about American politics

Perhaps the single most important fact about American politics is this: the people who participate are more ideological and more partisan, as well as angrier and more fearful, than those who don't.

The finding emerges from Pew's massive survey of 10,000 Americans, which concluded, two years ago, that "Republicans and Democrats are more divided along ideological lines — and partisan antipathy is deeper and more extensive — than at any point in the last two decades."

But everyone already knew that. Here's the real kicker: "these divisions are greatest among those who are the most engaged and active in the political process."

Pew's 2014 report is thick with crucial insights for understanding why American politics is the way that it is. But this week, they released a "political polarization update" that expands on the original data. "Growing ideological distance is not confined to partisanship," they conclude. "There are also growing ideological divisions along educational and generational lines."

Here are a few of them.

People talk of political polarization as if it's one thing. It isn't.

In April 1947, the American Institute of Public Opinion Surveys asked voters a question that sounds very odd to modern ears:

It has been suggested that we give up the present Republican and Democratic parties and have two new parties - one for the Liberals and one for the Conservatives. Would you favor this idea?

"Today, this question might seem absurd," writes the political scientist Hans Noel in Political Ideologies and Political Parties in America. "For most practical purposes, the present Republican and Democratic parties are parties of conservatives and liberals."

But that wasn't true in the middle of the 20th Century. The Democratic Party was home to lots of conservatives. The Republican Party had a vast liberal faction. "Ideology and political parties were two separate ways of organizing political conflict," Noel writes. But not any longer. Even since the 1990s, the shift towards a political system in which party and ideology are one has been stark: 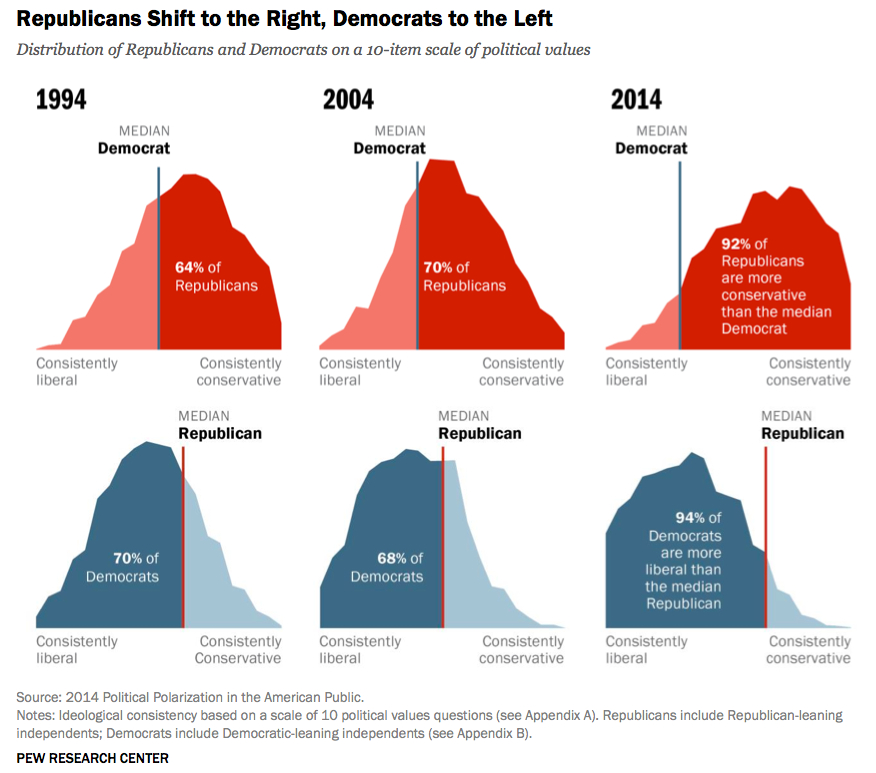 There are three forms of political polarization, and what matters most in American politics is how they interact with each other

What Pew finds, in other words, is that these forms of polarization are all converging. American politics is increasingly driven by a small group of highly ideological, highly partisan, highly politically engaged people.

2) Don't mix up polarization and extremism

If you read Pew's report closely, you'll notice they keep coming back to a very specific term: "ideological consistency."

This is an important bit of precision. People often assume "polarization" is a synonym for "extremism." It isn't. What's happened in American politics is not that the two parties have become more extreme. In the mid-40s, when polarization was much lower, there were members of both parties working together to block anti-lynching laws and protect segregation. That's pretty damn extreme.

People often assume "polarization" is a synonym for "extremism." It isn't.

Polarization is a measure of how political actors sort themselves, not how extreme they are. As the report says, "those who are ideologically mixed are often as likely to hold more 'extreme' positions as those who are more ideologically consistent. Conversely, one can be uniformly liberal (or conservative) in one's political values, but have a 'moderate' approach to issues."

This keys off work Berkeley's David Broockman has done showing that people who come off as moderates in polls often hold a lot of extreme positions. For instance, they might be for both single-payer health care and mass deportations. Since they have one "left" position and one "right" position in the poll, that makes them average out in the middle. But they're not moderates by any normal definition.

That's why Pew measures "ideological consistency": they're interested in whether Americans are effectively sorting themselves into clear teams capable of organized political combat. And they are.

3) The two parties are increasingly split by age and education

4) Republicans and Democrats hate each other 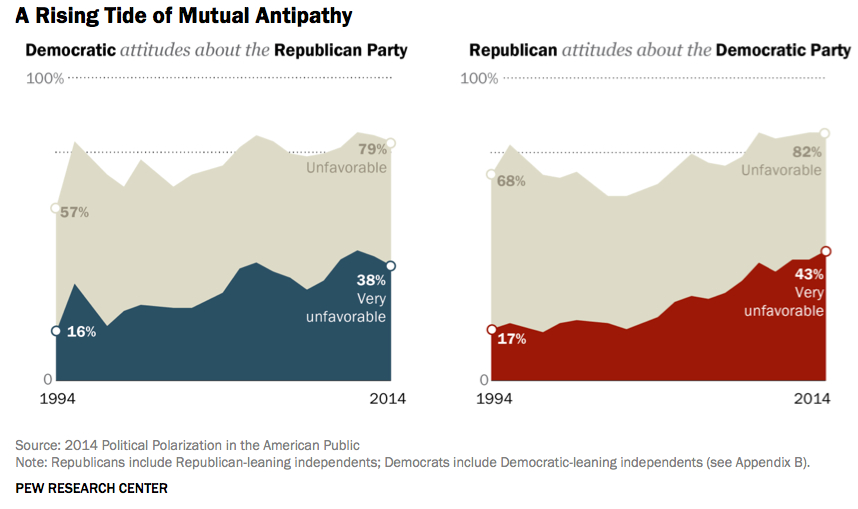 There's always been partisan bickering, and even partisan fighting, in America. But there hasn't been a moment since the advent of modern polling techniques when the two parties hated each other this much.

"Since then, highly negative views have more than doubled: 43% of Republicans and 38% of Democrats now view the opposite party in strongly negative terms."

So as bitter as you might remember the fights between Democrats and Republicans being in the mid-90s, keep in mind that the two parties hate each other much more now than they did back then.

5) Republicans and Democrats fear each other 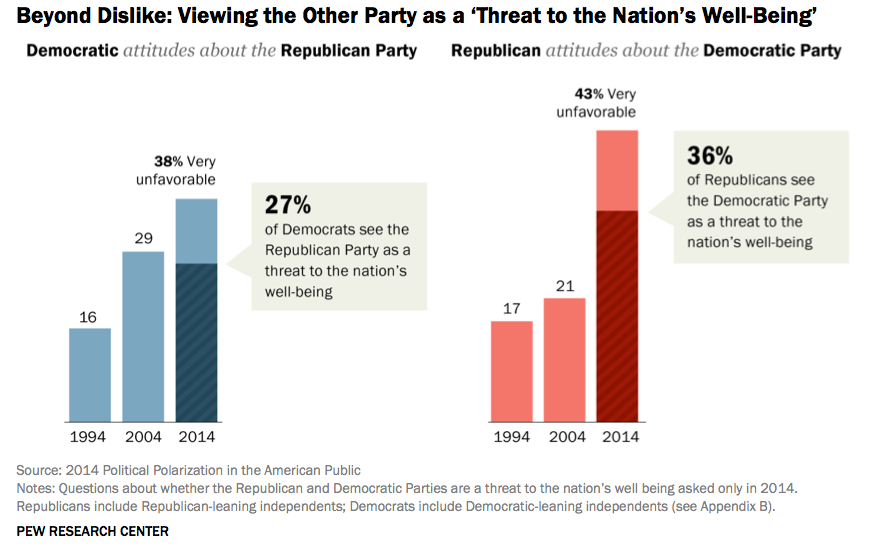 People often compare politics to sports. It's got teams, and winners and losers, and the different sides often hate each other. But here's where the analogy falls apart: in politics, many believe — often correctly — that if the wrong side wins, the consequences will be grievous. The other side isn't just disliked. They're dangerous.

"In both political parties, most of those who view the other party very unfavorably say that the other side's policies 'are so misguided that they threaten the nation's well-being,'" Pew reports. "Overall, 36% of Republicans and Republican leaners say that Democratic policies threaten the nation, while 27% of Democrats and Democratic leaners view GOP policies in equally stark terms."

Those numbers have more than doubled since 1994.

And here, as elsewhere, the effect is strongest among the most politically involved. Which makes sense: you're more likely to take an active interest in American politics if you think the stakes are high. But that means the people driving American politics have the most apocalyptic view of the other party. 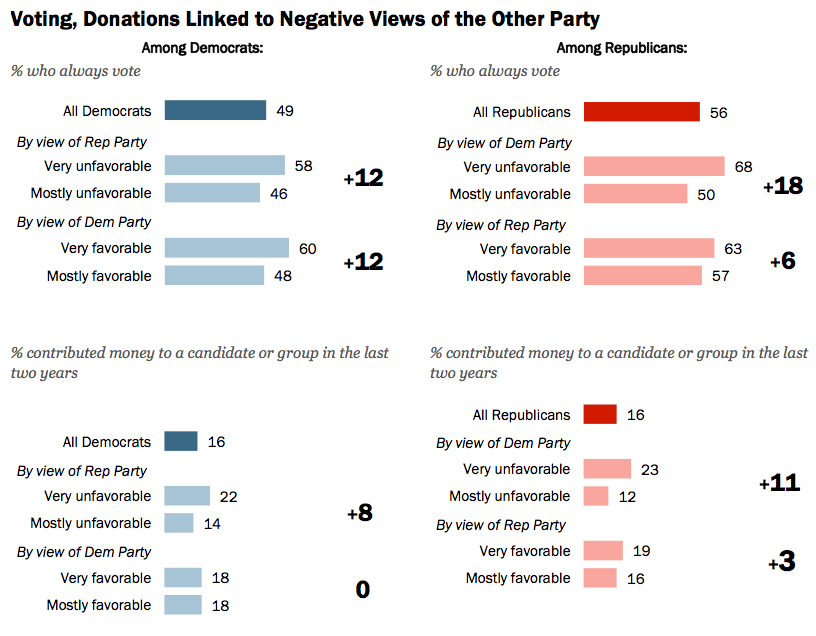 The increasing levels of anger and fear in the electorate are, from the political system's standpoint, a feature, not a bug. Pew finds that the angrier and more afraid you are, the likelier you are to actually donate or volunteer.

The angrier and more afraid you are, the likelier you are to actually donate or volunteer

"For example, 54% of Republicans and 46% of Democrats who have made campaign donations in the past two years describe the other political party as a threat to the nation. In other words, those who arguably have the greatest impact on politics are most likely to have strongly negative feelings toward the opposing party."

Notice the incentive structure here: the two political parties have every reason to want their supporters angry at, and scared of, the other side. And they have the power to scare them.

Politicians and parties have a choice between rhetoric that paints American politics as a disagreement between two reasonably well-meaning sides and rhetoric that paints it as an apocalyptic confrontation between good and evil. The calmer approach will mean fewer campaign donations and volunteers. The more hysterical messaging will ensure their campaigns have foot soldiers and the money to buy ads.

Some politicians talk openly about the pressure to demonize the other side. "When I send out a fundraising e-mail talking about how bad Republicans are, I raise three times as much as when I send out an e-mail talking about how good I am," said Sen. Chris Murphy, a Connecticut Democrat. "People are motivated to give based on their fear of the other side rather than on their belief in their side." 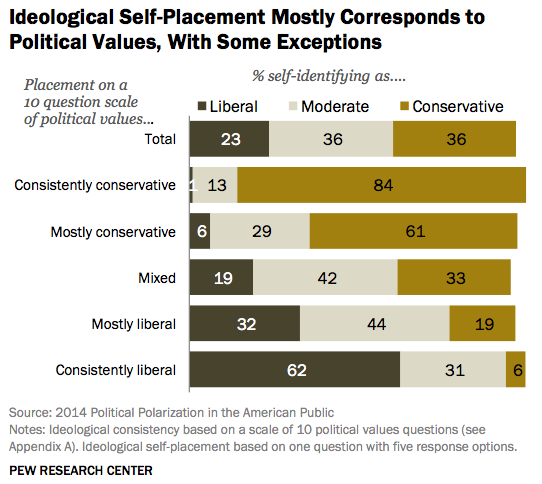 It would be interesting to see how many people whose positions place them as liberals identify as progressives. Pew didn't test that, though. 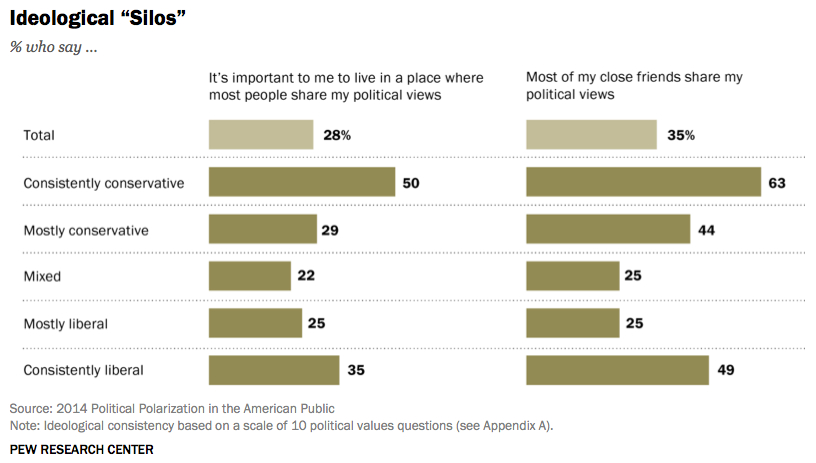 "Fully half of consistent conservatives (50%) and 35% of consistent liberals say it is important to them to live in a place where most people share their political views — the highest shares of any of the ideological groups," reports Pew. "If people living in 'deep red' or 'deep blue' America feel like they inhabit distinctly different worlds, it is in part because they seek out different types of communities, both geographic and social."

Pew finds that the stereotypes are true: 75 percent of consistent conservative want a community where "the houses are larger and farther apart, but schools, stores and restaurants are several miles away". Liberals were just the opposite: 77 percent wanted to live where "the houses are smaller and closer to each other, but schools, stores and restaurants are within walking distance."

As this suggests, liberals and conservatives have nearly opposite views on whether they would prefer to live in cities or rural areas: 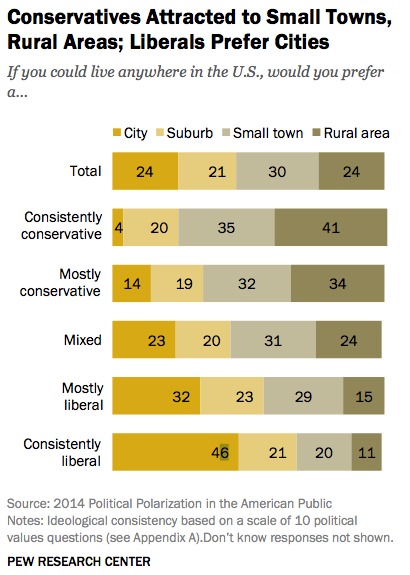 There were other differences, too. Liberals cared more about being in a neighborhood with a mix of racial and ethnic backgrounds. Conservatives cared more about living somewhere where others shared their religious beliefs.

It's easy to see how this could work to strengthen polarization over time. As Cass Sunstein and others have shown, people become more extreme when they're around others who share their beliefs. If liberals and conservatives end up moving to different places and surrounding themselves with others like them they're likely to pull yet further apart. And even for those who can't move, the internet makes it easy to settle in a virtual neighborhood with people who agree with you. Polarization is going to get a lot worse before it starts getting better.

Obama on polarized politics and his presidency