Share All sharing options for: This map shows how violence in Iraq could threaten the oil supply

Iraq is in chaos, as a group of Islamic militants has overrun the northwestern part of the country. And that means plenty of headlines like this one: "Oil prices spike as Iraq violence flares."

So what does the violence in Iraq mean for oil? So far, the turmoil has only affected a small slice of the oil infrastructure and hasn't touched any of the major oil fields in the south (which produce 75 percent of Iraq's oil). But there's still the potential for things to get much worse.

This map from Securing America's Future Energy is a great place to start: 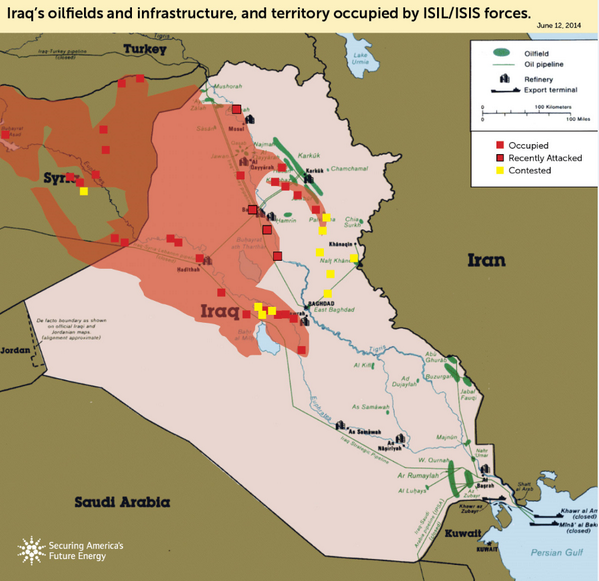 Some basics: Iraq has the world's fifth-largest proven oil reserves. But the country has only recently begun churning out significant amounts of crude oil again (production dropped sharply after the 2003 US invasion).

Or at least that was the idea. The recent takeover of northwestern Iraq by the Islamic State of Iraq and the Levant (ISIS) could complicate those plans considerably.

True, as the map above shows, ISIS isn't close to any of the massive oil fields in the southern regions of Iraq, which produce 75 percent of the country's oil. And ISIS has yet to enter the Kurdish regions in the north, another major oil-producing area.

But the fighting has threatened some of Iraq's other oil infrastructure, including a pipeline that can deliver 600,000 barrels of oil per day from Kirkuk to the Turkish port city of Ceyhan. (That pipeline had been damaged by a 2013 attack and was offline receiving repairs — that work has now been halted.)

There's also potential for things to get a lot worse. If the conflict spreads further into the Kurdish regions, that could disrupt operations in the large Kirkuk oil field near the city of Mosul, which now produces around 260,000 barrels of oil per day — and accounts for one-sixth of the country's proven reserves. Iraq had plans to invest heavily in that oil field in the years ahead, and that's a lot harder now.

Oil markets, for their part, appear jittery but not yet panicked. The price of Brent crude oil for July delivery jumped 2.8 percent on Thursday, to $113 per barrel — the highest level since last September: 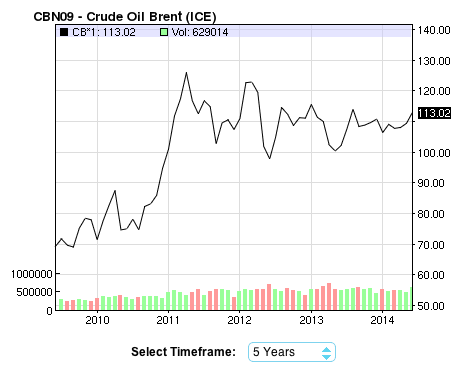 It's worth noting that prices have been hovering around this level for the past three years. So clearly Iraq isn't the only reason prices are high. More fundamentally, there's a supply and demand issue — the world is growing and demanding more oil, and suppliers are struggling to keep up.

Still, the recent growth of Iraq's oil industry was supposed to bring more oil to the global markets and ease this pressure somewhat. But as we've seen repeatedly over the last three years, unexpected conflicts — in Libya, in Syria, in Venezuela, and now in Iraq — always seem to throw a wrench in those plans.

Further reading: Steve Mufson has a nice piece at Wonkblog looking at Iraq's recent efforts to rebuild its oil industry — and the violence that could undo those efforts.