Share All sharing options for: Hillary Clinton struggles to explain when she first supported same-sex marriage

In an interview with NPR's Terry Gross, Hillary Clinton at times struggled to explain her evolution on same-sex marriage.

Throughout the conversation, Gross repeatedly questioned Clinton, a potential 2016 presidential contender, about whether she supported same-sex marriages from the start but was too worried about the political repercussions to publicly speak out about the issue. Gross pointed out that Clinton's husband signed the Defense of Marriage Act, which prohibited same-sex marriages at the federal level, into law.

"I think you are being very persistent, but you are playing with my words and playing with what's such an important issue," Clinton said. "I think you're trying to say that, you know, I used to be opposed, and now I'm in favor, and I did it for political reasons — and that's just flat wrong."

Clinton insisted that she, like other Americans, genuinely evolved on the issue. As she explained it, she didn't grow up even thinking about the possibility of same-sex marriages. But she shifted her position as LGBT advocates pushed the issue into the public spotlight.

It's easy to imagine that Clinton, like other politicians, simply changed her mind to adapt to the new political environment. But Clinton, who's 66 years old, would be far from alone among her age group if she truly changed her mind. Although much of the public's shift on same-sex marriage is due to a younger generation reaching voting age, older populations seem to have changed their minds as well. 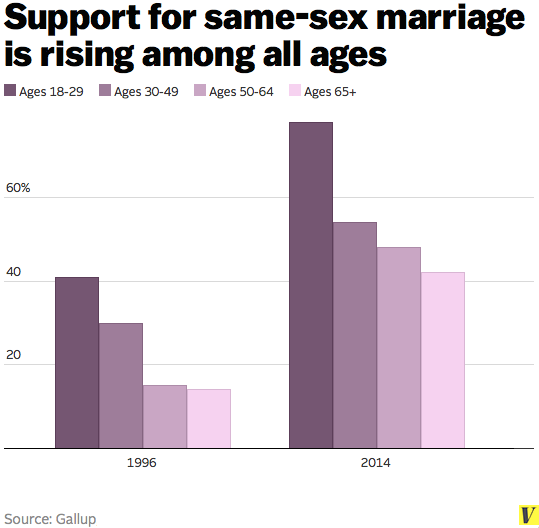 Clinton announced her support for same-sex marriage in 2013. President Barack Obama and Vice President Joe Biden did in 2012.