Kevin McCarthy has the least popular possible position on immigration

Share All sharing options for: Kevin McCarthy has the least popular possible position on immigration

It's ironic that House Republicans replaced outgoing House Majority Leader Eric Cantor, who many of them believe was defeated in a primary because of his insufficient opposition to immigration reform, with new House Majority Leader Kevin McCarthy. Cantor was highly resistant to "amnesty," and wasn't willing to stake out a position on what to do with the 11 million unauthorized immigrants currently in the US. McCarthy does have a position — it's just one that only a sliver of the American public shares.

In January, before House Republican leadership released its principles for immigration reform, McCarthy told local television station KBAK/KBFX: "In my personal belief, I think it'll go with legal status that will allow you to work and pay taxes." But extremely few people actually support "legal status" that doesn't result in citizenship for the undocumented. Most Americans want unauthorized immigrants to become citizens, either immediately or eventually; most of the rest want them deported. 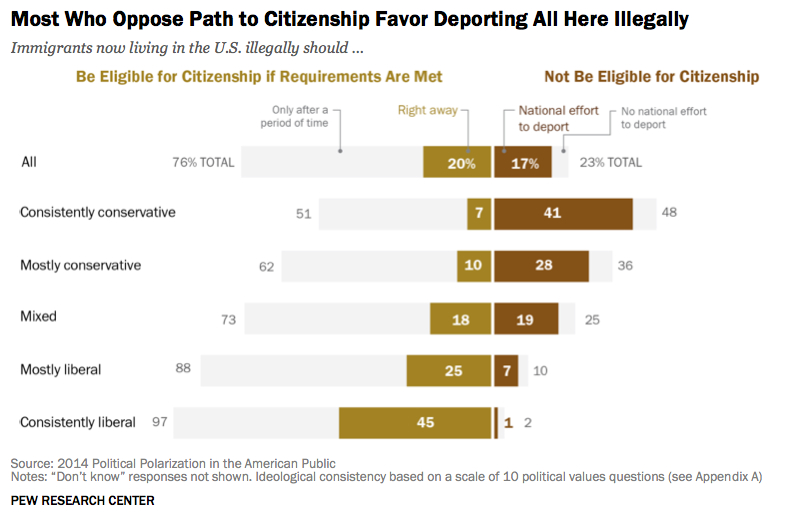 What they found: the overwhelming majority of Americans either want unauthorized immigrants to be eligible for citizenship (now or eventually), or want them deported. There's no real middle ground.

There's a persistent belief in Washington that there's an easy "compromise" on the question of what to do with America's 11 million unauthorized immigrants: give them legal status instead of deporting them, but don't allow them to pursue citizenship. But the Pew poll shows (as have other polls) that there isn't actually a constituency for that position.

That's why Kevin McCarthy's "personal" position on immigration can't translate into a viable plan for reform. And if the House Majority Leader can't tell how unpopular his own position is, it bodes poorly for the ability of House leadership to get a bill to the floor.