Share All sharing options for: DC is going to start taxing yoga lessons — it's a great idea

Today Washington, DC affirmed its commitment to a tax reform proposal that's been garnering massive pushback from the city's gyms, as well as hashtags denouncing the idea of a #yogatax. And obviously nobody likes to pay higher taxes. But the DC Council did the right thing by voting to keep the new tax in the budget, and states and cities around the country could learn from it.

No sales tax on abs! pic.twitter.com/yHOgUtQyki

The existing retail sales tax in the District is basically a tax on stuff you buy in a store. Walk into Bed Bath & Beyond and walk out with a bunch of spoons, and you'll pay sales tax. We also have a food & drink tax that bars and restaurants pay. And now the District is contemplating a tax reform that would eliminate a broad range of tax exemptions for service providers. 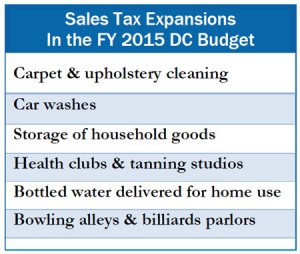 This impacts the economy in two ways. One it's distortionary, creating a tax subsidy to convert more things to services rather than goods than would otherwise be the case.

More importantly, the narrower your tax base the higher your tax rates need to be. If you exempt a large and growing share of economic activity from taxation, then you need to tax the rest at a very high rate to make up the lost revenue. Gym owners and yoga instructors are getting a sweetheart deal from the current tax code, but the inverse of their good deal is that other business owners are being penalized.