Americans are divided on everything, except their love of Social Security

Share All sharing options for: Americans are divided on everything, except their love of Social Security

The Pew Center is out with an amazing series of charts and graphs on growing partisan and ideological polarization in America, but since the trend toward polarized viewpoints is so strong I thought the most interesting finding was one area where there's no polarization — Social Security: 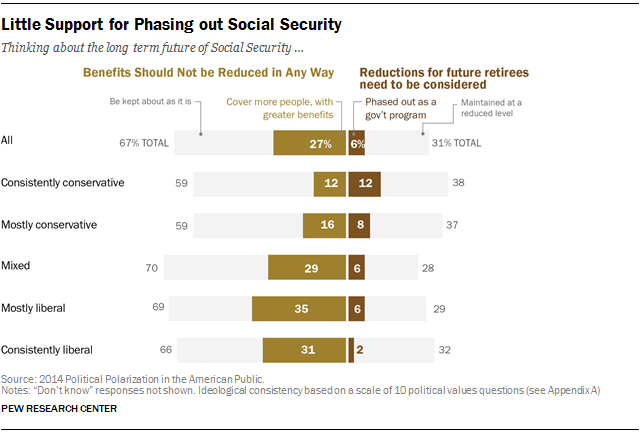 Among the most highly ideological, most consistent conservative voters in the country most people don't want to see cuts. Moderates don't want cuts. Liberals don't want cuts. Nobody wants cuts. The big gap is that there's a substantial bloc of liberal support for increasing benefits, while conservatives like the status quo better.

This is interesting because I think it underscores the limited relevance of public opinion to practical politics. Among policymaking elites, there's near-universal consensus that Social Security should adjust to population aging at least in part through benefit cuts. That's President Obama's view, it was supported by the Center for American Progress the last time they took a big look at Social Security, and it's taken for granted whenever pundits gather at roundtables that one of the sad things about congress today is that members can't sit down across the aisle and agree on a plan to cut benefits.

But at a time when Americans can't agree on anything, this is something they agree on.