Why Republicans can't ignore the growing power of Latino voters

Share All sharing options for: Why Republicans can't ignore the growing power of Latino voters

Every day, nearly 2,000 Latinos turn 18 and become eligible to vote. They're the driving force behind the continued growth of the Latino voting-eligible population, which is projected to rise 40 percent from 2012 to 2030 — to 40 million eligible voters.

The growing Latino population has sparked a debate within the Republican party about whether the GOP needs to do more to appeal to Latinos. Some strategists have said that the party can continue to win elections by appealing primarily to white voters — in part because Latinos, historically, haven't been as likely to vote.

A new report from the Center for American Progress (a liberal think tank) provides evidence that this strategy is unlikely to work. The report finds that the growth of the Latino vote in America is being driven by immigrants and their children — the very people who have a personal stake in the immigration debate. Furthermore, they find, Latino immigrants and the children of Latino immigrants are more likely to turn out for elections than subsequent generations of Latinos.

That means that as more Latinos are eligible to vote, more eligible Latinos will actually be voting. So Republicans — and Democrats, for that matter — will have a strong incentive to take the concerns of Latino voters seriously. 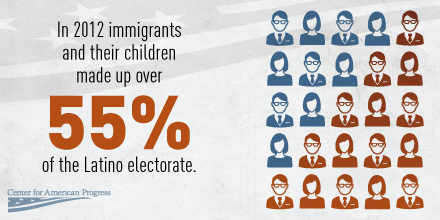 How the study worked 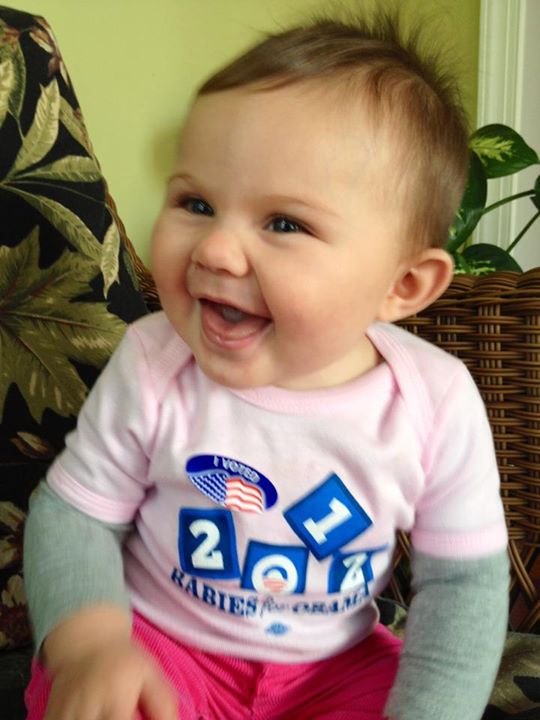 A third-generation immigrant who'll be eligible to vote in 2030. Lia Parada

As much as scholars and pundits are focused on the Latino vote, no one had really looked into where Latino voters were on the immigration family tree. This study used Census Bureau data to dig into not just how many Latinos voted in past elections — and how many will be eligible to vote in future ones — but what immigrant "generation" those voters come from.

Why do the priorities of second-generation immigrants matter? Because, according to the study, they're the fastest-growing Latino demographic.

The CAP study looks at elections going back to 1996. At that time, third-generation immigrants (the grandchildren of immigrants) made up the majority of eligible Latino voters; the first and second generations (immigrants and their children) made up a combined 47 percent. But in the early 2000s, first and second generation immigrant eligible voters became the majority — in 2012, they made up 55 percent of all eligible Latino voters.

Furthermore, the growth of the second generation of immigrants — the children of immigrants — is accelerating. From 1996 to 2008, second-generation Latino immigrants made up between 26 and 28 percent of all eligible Latino voters. In 2012, that spiked to 31 percent.

The study focuses on Latino citizens who have turned 18, or will turn 18, between 2012 and 2016. There are 3.3 million of these Latino eligible voters — and the majority of them are the children of immigrants. 57 percent of Latinos who'll be eligible to vote for the first time in 2016, the study finds, have at least one immigrant parent. That's the generation most connected to the immigration debate. 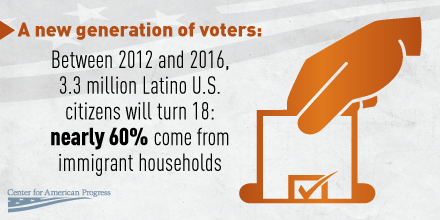 What matters most isn't who's eligible to vote, but who actually turns out. And historically, in the words of the Pew Research Center, Latinos "punch below their weight" when it comes to turning out to vote. In 2012, 66 percent of African Americans who were eligible to vote did, and 64 percent of whites — but only 48 percent of eligible Latinos voted. (The turnout rate for Asian Americans was 47 percent.)

among latinos, first- and second-generation immigrants are more likely to vote than third-generation ones

Obviously, there are other demographic factors behind voter turnout. For example, older citizens are much more likely to vote than younger ones. But even when comparing Latinos in the same age group to each other, the study found that turnout rates are higher for first- and second-generation immigrants than they are for third-generation ones. (The study only looks at the 2012 election when comparing age groups, but the study's author, Patrick Oakford, has told Vox that the pattern holds in most cases since 1996.)

Here's what that means. Right now, 45 percent of eligible Latino voters are third generation immigrants. Their turnout rate is relatively low for Latinos, so it's bringing overall Latino turnout down. But for the foreseeable future, a majority of Latino citizens turning 18 are going to be the children of immigrants — who are more likely to vote. And there will also be new Latino voters who've just been naturalized — first-generation immigrants — who are the most likely to vote.

So going by generation, at least, it's reasonable to predict that Latino voter turnout is going to increase for the next several elections. And Latinos as a whole will start "punching" closer to their weight at the ballot box.

Why the study matters

In 2004, George W. Bush won over 40 percent of the Latino vote. In 2012, Mitt Romney won 27 percent. Many leading Republican pundits (like Karl Rove) say that the Republican Party needs to win more Latino votes if it wants to win back the White House.

But a number of conservative commentators have argued that Republicans shouldn't go chasing after a demographic that's running away from them — instead, they should focus on maximizing their share of white voters, and making sure those voters go to the polls. They tend to point to analyses by Sean Trende of RealClearPolitics, who doesn't advocate for a "whites-only" strategy, but whose analysis lays out how such a plan could be viable.

One important part of this argument is that the Latino vote "show(s) potential for growth, but that potential for growth has been completely unrealized over the past decade." (Trende wrote that before the 2012 election, but, as Pew pointed out, the trend of Latinos "punching below their weight" continued through that election as well.)

The new CAP study presents substantial evidence that Latino voters are going to start turning out more and more in future elections. They're demographically primed for it.

That means that Republicans who are thinking about how to build a coalition that can win back the White House, but have decided the Latino vote isn't worth it, might want to reconsider.

It makes the case that both parties need to take Latino voters' issues, especially immigration, seriously as legislation — not just rhetoric

But the relationship between voter blocs and elected officials goes both ways. Politicians want to persuade a group of voters that they agree on the issues that group cares about. But once the politician's elected, the voter bloc needs to persuade him or her to act on those particular issues — as opposed to other issues that could demand attention. And the voters with the most clout, studies have shown, are the voters who turned out to vote in the last election, and are most likely to turn out for the next one. 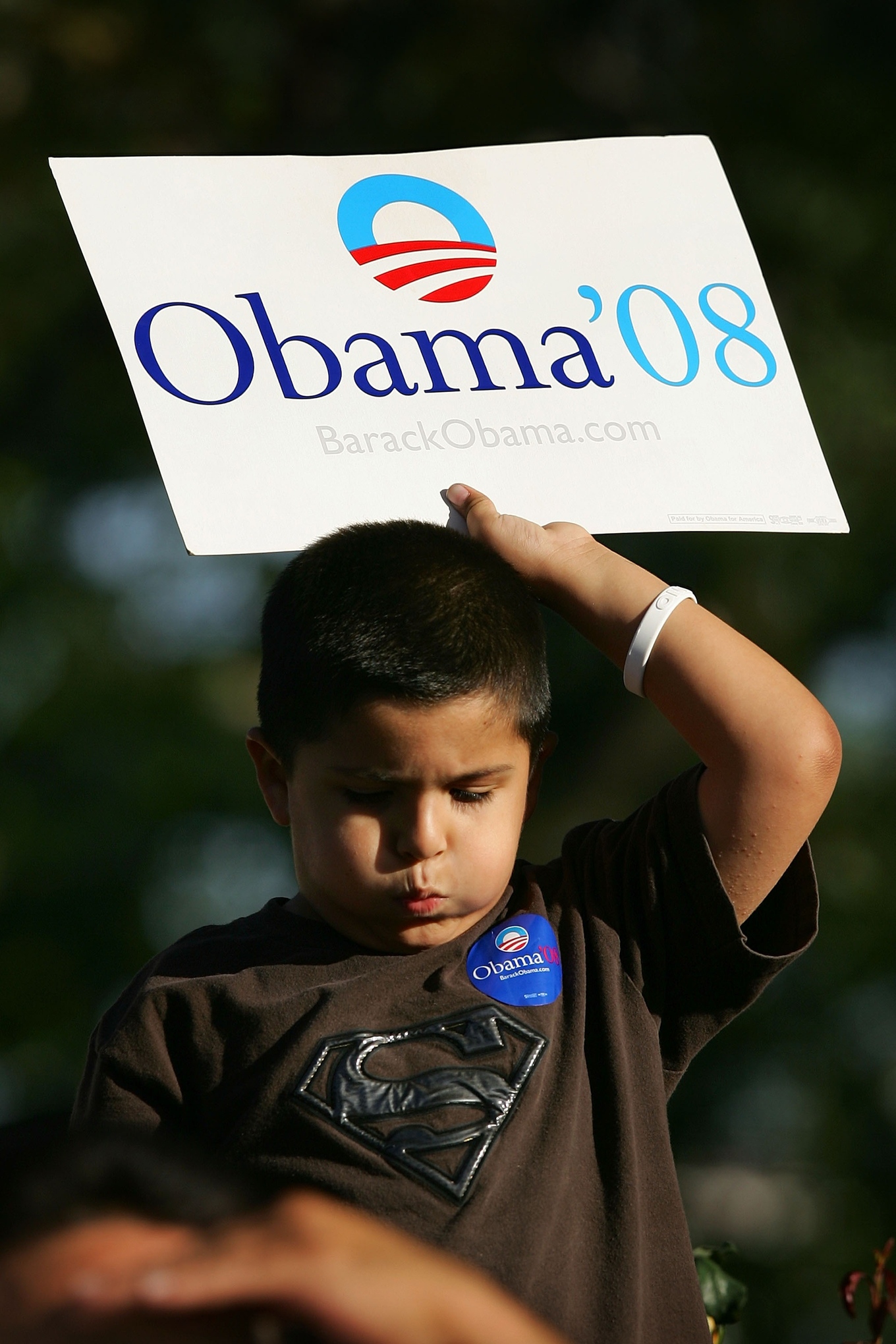 Latino voters' influence in 2012 led both parties to agree, in the days after President Obama's re-election victory, that immigration reform should be a legislative priority. But in previous years, Latinos hadn't necessarily been considered reliable enough voters to be worth prioritizing when setting a legislative agenda.

This study shows that Latinos are primed to become a higher-turnout voting bloc. But polls are also showing that the absence of immigration reform, and President Obama's record deportations of immigrants, are damaging the faith Latino voters have in the political process — and making them less likely to vote. The CAP study shows that the Latino vote is a growing demographic, but it's still an emerging and evolving one. And that might mean that policymakers in both parties should think about how their actions today could shape the attitudes of voters who cast their ballots for the first time in 2032.

UPDATE: The original version of this article characterized Sean Trende as supportive of the strategy for the Republican Party to maximize white votes. Trende's analysis has been used by those arguing for that strategy, but Trende himself does not favor that view.