Americans are sleeping less than Canadians, Mexicans, Germans, and the British

Share All sharing options for: Americans are sleeping less than Canadians, Mexicans, Germans, and the British

Americans aren't getting enough sleep. And it's so much of a problem that in 2011 the Centers for Disease Control started calling it an epidemic.

Most adults need to sleep 7 to 8 hours a night, according to the National Institutes of Health. And 37 percent of Americans are sleeping less than seven hours on work nights.

In the short term, undersleeping leads to problems with memory, attention, and  — according to the National Highway Traffic Safety Administration — about 100,000 car crashes a year. In the long run, sleep deprivation is linked to a host of health problems including cancer, heart disease, obesity, and mood disorders.

Add those issues to the 60 million or so Americans with bona fide sleep disorders such as sleep apnea and insomnia, and you've got one exceptionally underslept nation. Here, in six maps, is the size and scope of America's sleep epidemic:

1) Americans are sleeping less than Canadians, Mexicans, Germans, and the British 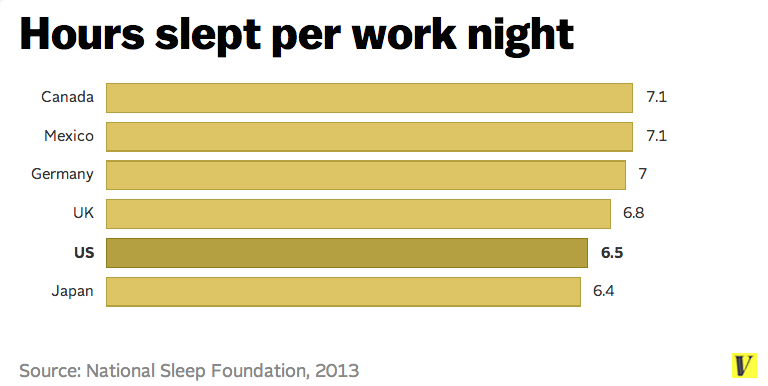 This poll included six nations, and the US came in at a sorry fifth place. US respondents said that they were sleeping about six and a half hours per work night, which put them behind everyone except Japan. First place for sleeping the best? A tie between the US's northern and southern neighbors: Canada and Mexico. But even those winners could use a little more shuteye. Depending on whose advice you take, they should be sleeping roughly 25 to 55 minutes more on average.

2) Lack of sleep is related to trouble concentrating and remembering 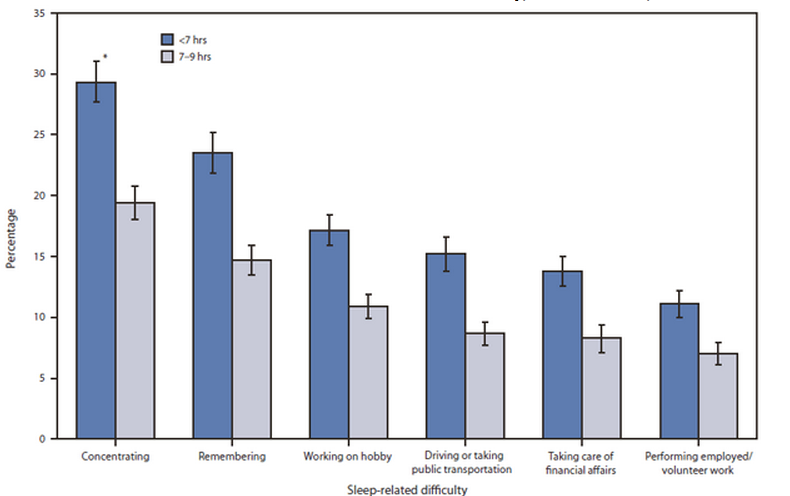 Sleeping less is related to a wide variety of everyday problems. (CDC)

In this CDC analysis, people who slept less than seven hours on work nights (dark blue) were roughly 50 percent more likely to say they had trouble concentrating, remembering, working on a hobby, driving or taking public transit, taking care of financial affairs, and working. For a few of these, cause and effect could be working both ways. For example, people with financial trouble might be anxiously lying in bed thinking of said financial troubles instead of floating off to the Land of Nod. Then, the sleepiness this causes could be interfering with their ability to finally write up that family budget or sign up for that 401(k).

3) It didn't always used to be this way 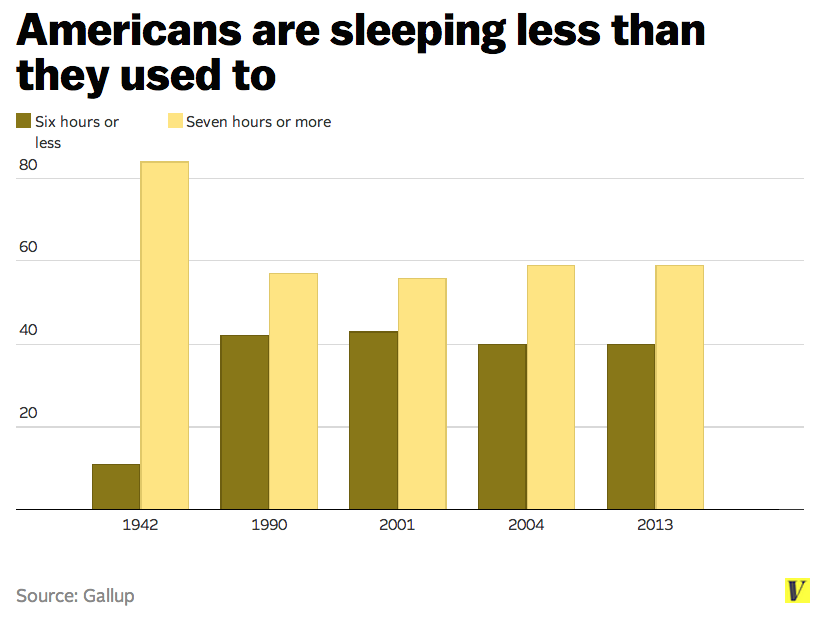 In this Gallup polling data, you can see the massive change in sleep between the 1940s and the 1990s. In 1942, only 11 percent of those polled said that they slept six hours or less a night. By 1990, 42 percent did. And that has held roughly steady ever since. (Granted, 1942 — right in the middle of World War II — was an unusual time in American history to determine a data point. But, apparently this decrease in sleep is a general trend in several nations. According to a story in Nature, people in many countries are getting an hour or two less sleep per night than they did 50 to 100 years ago.) 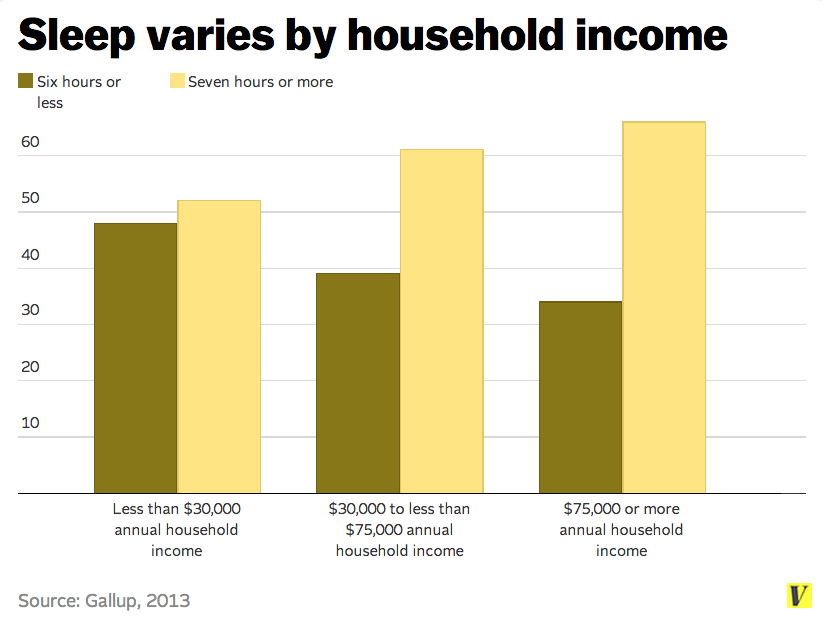 Sleep appears to be functioning as a luxury good. And when time is money, some are having trouble affording it. For those whose household income is less than $30,000, 48 percent are sleeping six hours or less on an average work night. This drops to 34 percent for those making $75,000 or more. There could be many interrelated reasons for this. In addition to simple demands on time, there are also links between poverty, obesity, sleep apnea, and sleep, as well as links between anxiety and sleep.

5) Some states sleep worse than others 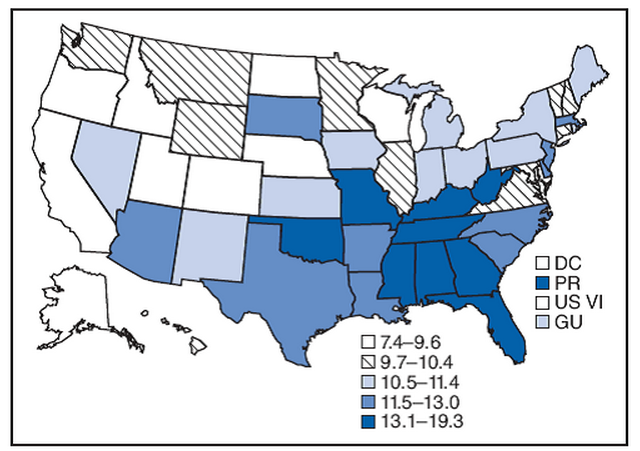 The bluer the map, the worse people say that they are sleeping. (CDC)

The map above shows the percentage of people who said that they didn't have enough sleep or rest for every day of the past 30 days. That's right — bad sleep every single night. Of the nine states with the worst sleep, six also have the worst poverty rates in the nation, with more than 30 percent of their residents living in poverty areas. This same region also has the highest rates of obesity, which is not surprising, considering that poor sleep seems to lead to obesity and/or vice versa. 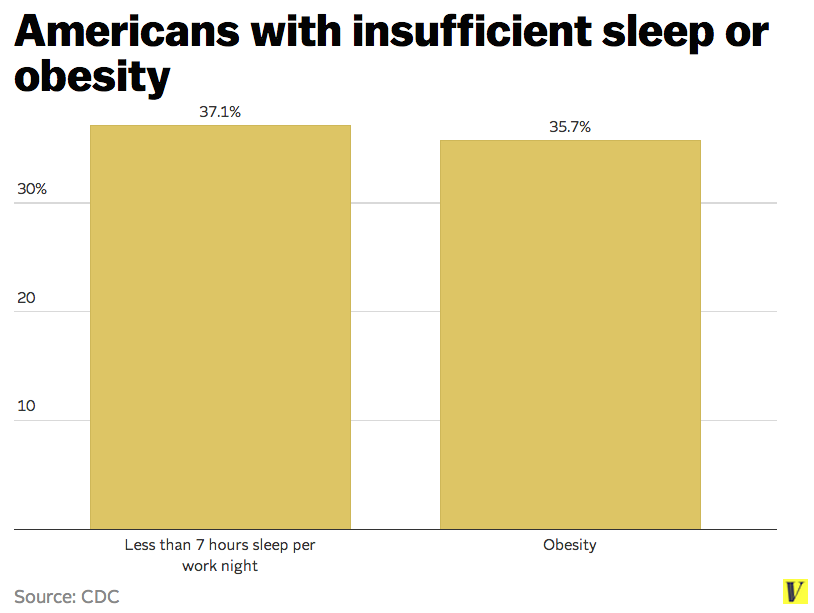 The CDC wasn't off its rocker when it started referring to Americans' sleep habits as an epidemic. According to its analysis of the National Health and Nutrition Examination Survey (NHANES) of a statistically representative sample of 10,896 Americans from 2005 to 2008, more than a third of Americans are sleeping less than 7 hours on work nights. (And no, you can't just make up for it on the weekends, although it wouldn't hurt to try.)

Why you're so tired on Monday mornings

You're not sleeping as much as you think you are

Why do people need to sleep? Here are 5 possible theories