2 promising signs for US health spending

Share All sharing options for: 2 promising signs for US health spending

Health-care spending might not be growing so quickly after all.

the Bureau of Economic Analysis's initial estimates may have been wrong

Earlier this year, the Bureau of Economic Analysis projected that health-care spending would massively increase in the first quarter of 2014. In the health wonk world, that inspired a lot of panic about the return of high health-care cost growth. Not only would that make health care more expensive for everyone, but it would further strain budgets at all levels of government.

The good news is the latest federal data on health spending suggests that the Bureau of Economic Analysis's initial estimates may have been wrong and could be revised downward. If that's the case, health-care spending could still be growing at the same timid pace it has been for years.

For the federal government, the most promising news comes through Medicare.

The latest data, as broken down by the Committee for a Responsible Federal Budget, shows underlying Medicare growth, even after adjusting for temporary policies, is growing at just 2.5 percent. That's more than a full percentage point below economic and beneficiary growth. Medicare, in other words, is growing slower as a percent of the economy and on a per-person basis. 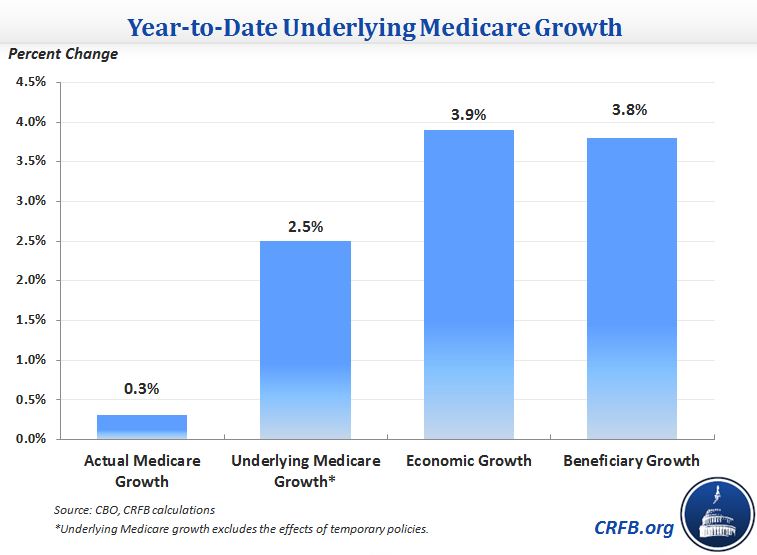 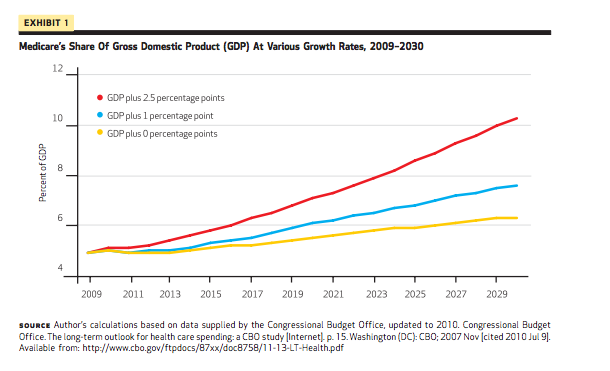 What's interesting is the data analyzed by CRFB actually shows Medicare growth trending down below the yellow line. There's plenty of reason, based on historical and even recent trends, to doubt that will hold. But if it does, it's huge news for government health-care spending.

There's some signs overall health-care spending could be revised downward

For the rest of the country, the latest quarterly services report from the Census Bureau suggests health-care spending isn't rising as quickly as previously anticipated.

Earlier in the year, the Bureau of Economic Analysis estimated that the first quarter of health-care spending would grow by 9.9 percent. But this early estimate is based largely on modeling and guesswork, since the BEA didn't have hard spending data to go off when they made their projections.

Now that we have hard spending data, it looks like the 9.9 percent projection was too high. Ambulatory health-care services reported just 2.2 percent year-over-year growth, and hospitals reported 3.5 percent growth. 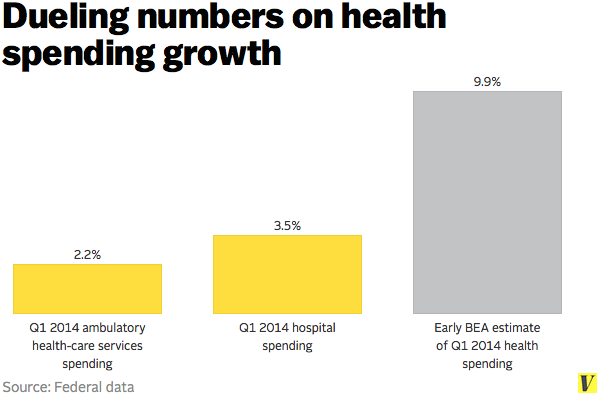 Larry Levitt, senior vice president at the Kaiser Family Foundation, says the lower numbers give him reason to believe the Bureau of Economic Analysis overshot its estimates and will revise them downward in the future. He suggests the agency may have overestimated how much pent-up demand there was for health-care services among the uninsured, many of whom are now insured under Obamacare and now have greater access to health care.

Now, it's possible this data will be revised or the slow growth trend is temporary. Levitt, for instance, points out that if there was a lot of pent-up demand for health-care services among the uninsured, that would more likely show up in the second quarter.

But, for now, there's at least two reasons to be a little more optimistic about health-care spending.