Schools have been getting less violent over the last 20 years

Share All sharing options for: Schools have been getting less violent over the last 20 years

School violence is in the headlines after a horrific shooting in Portland, OR. After my colleague Zack Beauchamp posted a map of all school shootings over the last 18 months, I was curious whether this was part of a longer-term trend of increasing school violence.

Reason's Jesse Walker points me to a recent government report on school-related violence that provides some data on the topic. 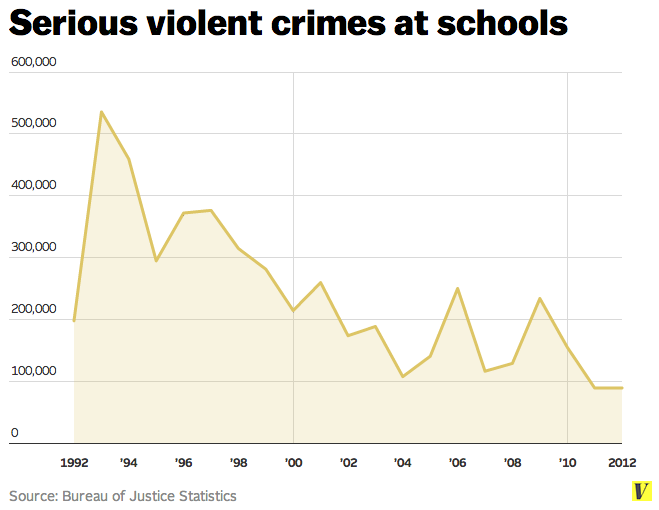 This chart shows the number of serious but non-fatal violent crimes, which the government classifies as rape, sexual assault, robbery, and aggravated assault.

Nationwide, crime rates peaked in the early 1990s and have been dropping ever since. That falling crime rate is mirrored on our campuses. Grade school and high school students are less likely to be robbed or assaulted at school than they were 10 or 20 years ago. And these declining crime rates have occurred even as the number of students has grown.

The data on homicides are murkier, in part because murders are comparatively rare. There were 47 school-related homicides (those that occurred in K-12 schools or at school-related events) nationwide in the 1992-93 school year. In the 2010-11 school year, there were 25. But the data bounces around a lot. 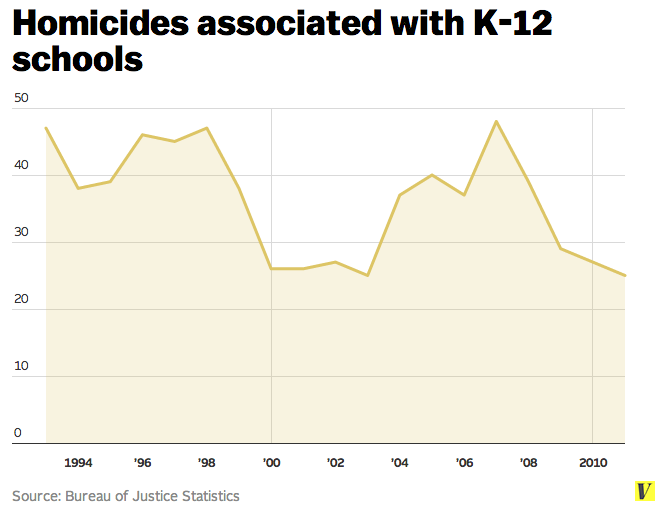 Unfortunately, the data in this chart ends with the 2010-11 school year. The 26 people murdered in Newtown, CT, in 2012 will likely push the 2012-13 figure to a record high. But it will be a few years before we know if that's part of a new trend toward growing school murders.