Don't freak out, but there are thousands of mites living all over your face

Share All sharing options for: Don't freak out, but there are thousands of mites living all over your face

Right now, there are thousands of mites on your face. They're microscopic, but closely related to spiders and ticks. And despite your reaction to hearing this news, there's absolutely nothing wrong with you.

"99.9 percent of humans carry them," says Ron Ochoa, a mite scientist at the US Department of Agriculture. They're most abundant on our faces, but live in the hair follicles all over our bodies, and a single person may harbor more than one million of them in total.

During the day, the animals stay hidden in your follicles, feeding on oils naturally secreted by your glands. At night, they use their stubby legs to climb to the surface to find mates.

Perhaps the most startling fact about these mites: they were first identified in 1842, but scientists still know surprisingly little about them.

"These are things that live on us — they're intimately associated with us — but they've not really been studied," says Holly Menninger, who's part of a North Carolina State project that's sampling the mites that live on hundreds of volunteers. "It's kind of crazy."

Her team is among the few that trying to learn more. Here's what little we do know so far about the mites you carry everyday.

We don't even know how many mites we carry 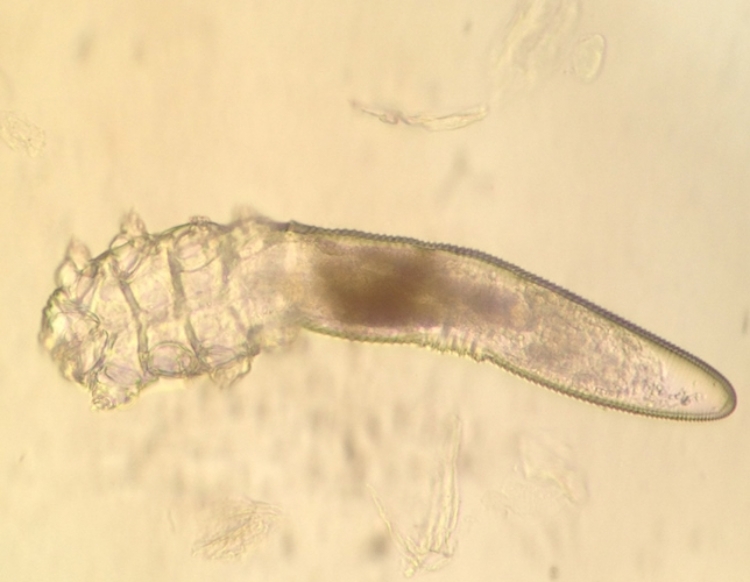 Your body harbors at least two closely-related species of mites: Demodex folliculorum and Demodex brevis. Both live in your hair follicles, but folliculorum live in the follicles' main cavity, whereas the smaller brevis live in something called the sebaceous gland, which secretes a waxy oil called sebum — likely the mites' main food source. 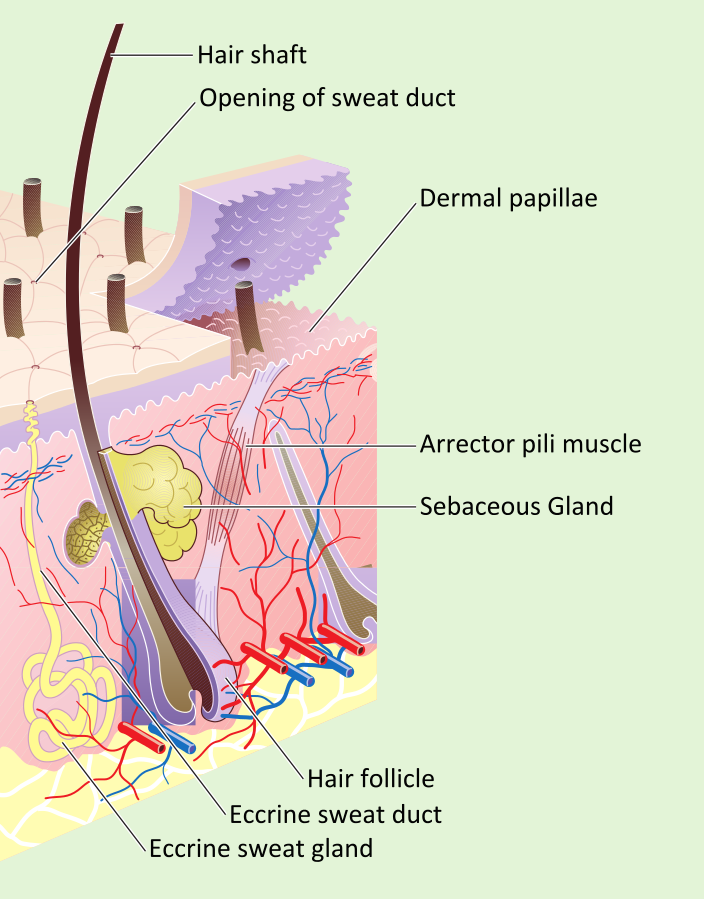 Both types of Demodex are densest on the face — especially near the nose, eyebrows, eyelashes, and hairline — but they live anywhere on your body where hair follices are. Scientists, however, have never fully studied the total abundance of mites on the human body. Dan Fergus, a researcher that works with Menninger, estimates that the average person has between 1.5 and 2.5 million mites, but no one really knows.

Nearly all adults carry these mites, but children usually don't — and only about 70 percent of 18-year-olds do. It's still unclear how we initially pick them up. Many scientists believe we somehow acquire them from our parents — Ochoa thinks they first latch on to us when we breastfeed as babies — while others hypothesize that we acquire them from sexual partners.

One thing is certain: mites have lived on humans for a very, very long time. "The mite is so well-adapted to live in our face and our hair that our immunologic system cannot recognize them," Ochoa says.

Like the barnacles that cover whales or the fish that follow sharks to eat their leftovers, they speak to the incredible power of evolution to fill every single niche in existence, given enough time.

The mites party on your face at night

During the day, both types of Demodex stay inside your follicles, feeding on sebum. It's also believed that they eat some of the actual cells that line the follicles, along with the bacteria living on them, though it still isn't certain.

At night, they slowly crawl up to the surface at a speed of a few millimeters per hour, using eight short, segmented legs:

Up on the outer rim of your follicles, they look for mates. "We joke that the mites come out to party, because they have sex on your face at night," Menninger says. During the day, they return to the follicles, where females lay eggs.

It's unclear why they they stick to this diurnal schedule, but it's possible it's because emerging while their hosts (i.e. us) are sedated is less dangerous. It's also not obvious how they know when we're sleeping: they might simply be sensing light, or they might be responding to hormonal changes in our bodies.

"we joke that the mites come out to party, because they have sex on your face at night"

The only way we know about their nightlife, in fact, is from experiments in which people slept with tape on their skin to trap the mites when they emerge. Daytime sampling methods are a little simpler: you can isolate mites by putting mineral oil on the pores near your nose, causing them to open up, then scraping them with a piece of metal. If you put the resulting goo under a microscope, you'll likely see mites wriggling around inside.

The vast majority of these mites are probably harmless — even though they're equipped with a clawed organ called a palpus, on either side of their mouth, that lets them dig into and secure themselves to your follicle cells.

In some cases, though, mites may exacerbate rosacea. This could be due to the fact that they don't defecate, and simply let feces build up in their bodies over time. When they die and begin to decompose, these feces all get released at once — and for some people, this may trigger an immune response that leads to flare-ups of rosacea.

We still know so little about mites — and they're everywhere 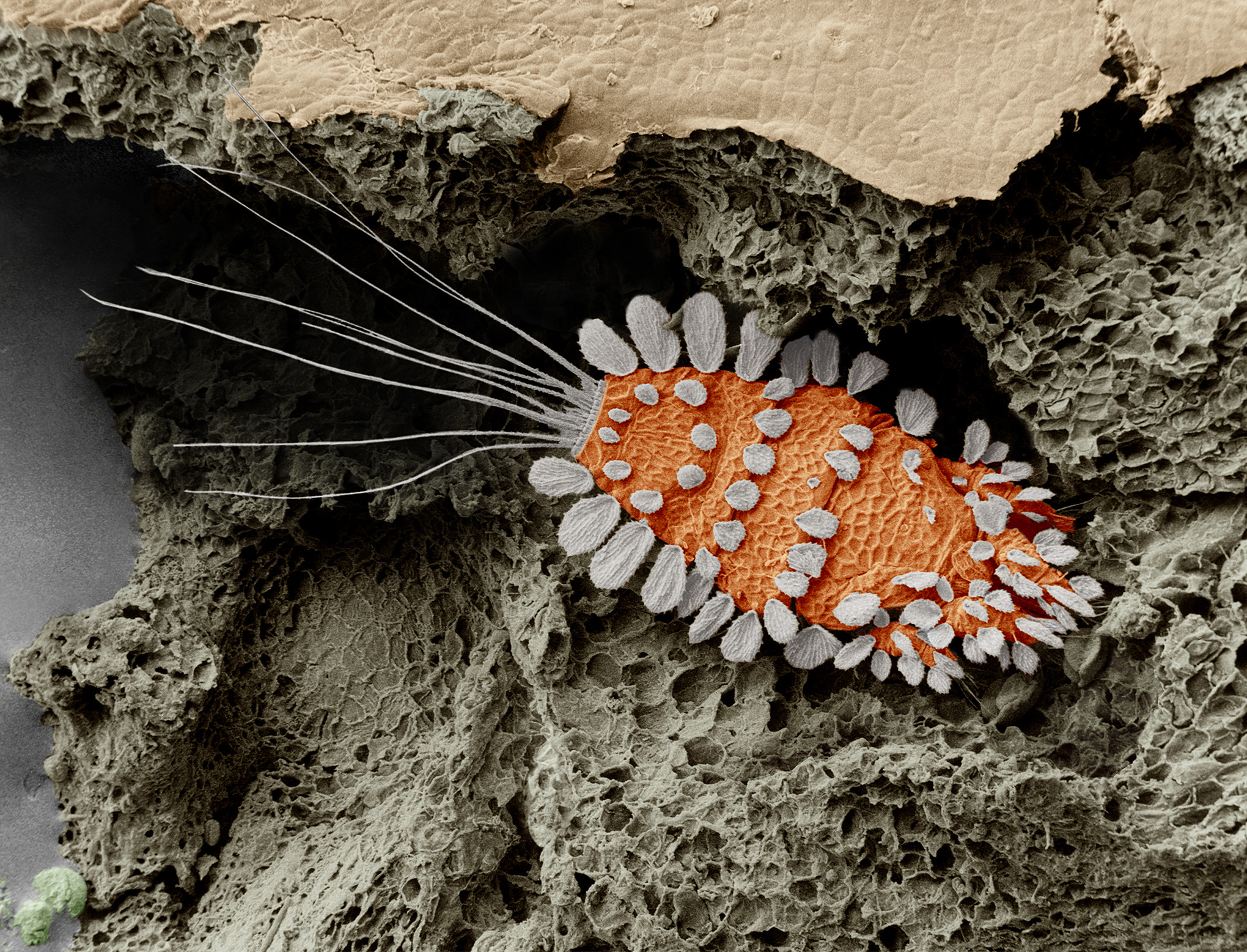 Mites as a whole are a shockingly understudied group, even though they were first described by Carl Linneaus in the 18th century and live pretty much everywhere. Ticks are a type of mite, but they're just the most well-known out of more than 57,000 mite species we've found so far.

And there are thousands more are still waiting to be discovered. Some scientists believe virtually every animal and plant species has its own distinct species of mite living on it.

"The number of mite species is probably one of the most underestimated out of all animal groups living on the planet." Ochoa says. "If there are five million species of insects, you have to realize that every insect probably has its own mite species."

"If you walk outside and take a scoop of soil, you'd probably find an entirely new mite species"

There are also thousands of free-living mites present in all sorts of ecosystems. They're especially abundant in soil. "If you walk outside into your front yard, take a scoop of soil, and looked in it, you'd probably find an entirely new mite species," Ochoa says.

The North Carolina State group believes there are even more mite species that live on humans and still haven't been found. That's why they're sampling people of different ethnic groups for mites, hypothesizing that during the tens of thousands of years humans lived and evolved in distant corners of the globe, the mites that lived on them evolved and diverged as well.

We've only begun to deeply study and widely appreciate the importance of the microbiome — the trillions of bacteria that live in and on us — over the past few years. Mite-obsessed researchers hope the era of mite appreciation will similarly follow.

"They have been completely off the radar screen, not only for common people, but science professionals," Ochoa says. "Mites sit right under our noses, and we're totally unaware of their relationship with them."