Share All sharing options for: Eric Cantor wasn’t beaten by the Tea Party

Eric Cantor wasn't beaten by the Tea Party. He wasn't rejected by Republicans. He was beaten by 36,000 of the roughly 65,000 people who voted in last night Republican primary in Virginia's 7th congressional district.

Cantor's loss last night came at the hands of about 5 percent of his constituents. 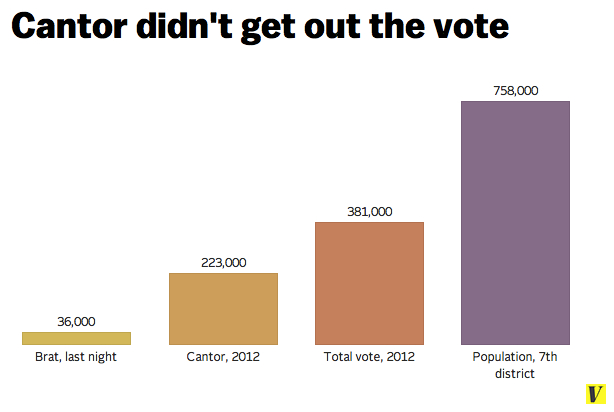 And though Cantor's defeat is national in its effects, less than three-hundredths of 1 percent of the people who voted in the 2012 House elections voted against Eric Cantor last night.

There is no grand ideological lesson to draw out of those results. They don't say what Americans want, or what Republicans want, or even what Tea Party conservatives want. They don't reveal the true politics of immigration reform (particularly on a night when Senator Lindsey Graham easily beat back a primary challenge) or whether the Tea Party is a live wire or a spent force in American politics.

There are no grand lessons about the schisms in the Republican Party in those results. As Ben Domenech writes in the Transom, "this race was not about the Tea Party — Dave Brat may have been backed by voters sympathetic to the Tea Party, but not by any significant organization, money, or groups."

It's not even clear the results say much about Cantor's relationship with his constituents. RedState's Erick Erickson says: "Cantor lost his race because he was running for Speaker of the House of Representatives while his constituents wanted a congressman." But internal polls showed Cantor up by more than 30 points in his district. It's possible that the majority of Republicans in Virginia's 7th District wanted Cantor to win and just never considered the idea that he could lose. As for "his constituents," barely any of them voted on Tuesday.

If the results point to one clear culprit, it's Cantor's campaign — and, in particular, his polling and get-out-the-vote operations. Cantor almost certainly had more than 36,000 supporters in his district. But he didn't turn more than 36,000 of his supporters out to the polls. He may not have even known he needed to worry about how many of his supporters would go to the polls. The Washington Post reports that "as late as Tuesday morning, Cantor had felt so confident of victory that he spent the morning at a Starbucks on Capitol Hill, holding a fundraising meeting with lobbyists while his constituents went to the polls."

"That's becoming the real lesson of the 2014 primary season," Domenech writes. "Good candidates win, bad candidates lose." Last night Cantor proved himself a bad candidate running a bad campaign. And that, above all else, is why he lost.

Q&A: We'll be opening up the comments on this post from 1-2pm ET and Ezra and other members of the Vox team will answer your questions about Cantor's loss and what's next for the House of Representatives.