Americans are probably far more overweight than they think

Share All sharing options for: Americans are probably far more overweight than they think

Just over one-third of Americans say they are overweight, according to Gallup. But as far as medical definitions of overweight and obese go, they're way off.

Gallup reported Tuesday that 36 percent of Americans think they weigh too much, according to survey data collected from 2011 to 2013. The US government, meanwhile, puts the figure much higher. As of 2012, 63.7 percent of Americans were overweight or obese (having a body mass index of 25 or higher), according to a Kaiser Family Foundation analysis of data from the Centers for Disease Control. 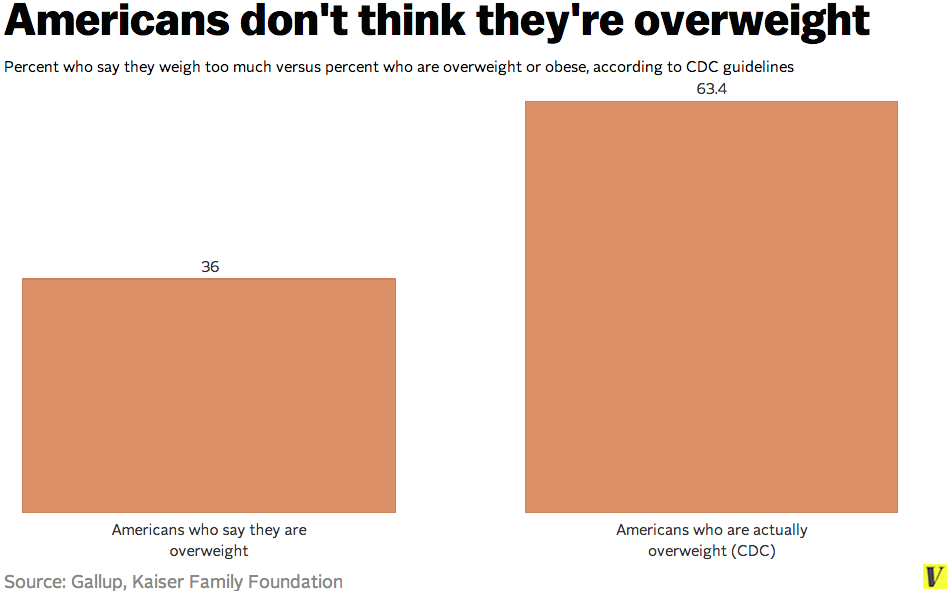 The CDC is just one of a few organizations that reports Americans are far more overweight than they seem to think they are. Gallup points to recent data from the Institute of Health Metrics and Evaluation, which found that two-thirds of Americans are overweight or obese.

Likewise, when people report their own weights and heights, they also come out far more overweight than when they are simply asked whether or not they weigh too much. When Gallup asked people about these figures, 62.8 percent of Americans came out overweight (meaning they had a BMI of 25 to 30) or obese (BMI of 30 or greater).

It's easy to look at this data and laugh at how deluded we Americans are, but it's also worth noting that BMI — the basis for all of these figures — isn't exactly a perfect measure of how overweight a person is. Critics say it tells you nothing about body fat composition; since it relies on height and weight, it can say a person who is simply very muscular is overweight. Some experts believe measuring waist circumference is a more effective, simple tool. A higher waist size has been found to be correlated to a higher health risks.

NPR's Keith Devlin captured many of these criticisms in an excellent 2009 critique of BMI. Among his points, he notes that BMI draws sharp distinctions that don't exist in reality — can someone with a "normal" BMI of 24.9 really consider herself much more healthy than someone with a BMI of 25?

Not that Americans couldn't stand to lose a few pounds. BMI may be imperfect, but it seems unlikely that the growing ranks of obese people in the US (and the world over, for that matter) are happening because lots of people have taken up bodybuilding or have started carrying their weight somewhere other than their waistlines.

BMI may make it unclear how many Americans truly do weigh too much, but it is true not everyone who thinks he's overweight is doing something about it. Of the 36 percent who count themselves as overweight, only half are trying to lose weight.