12 things to know about Dave Brat, the man who took down Eric Cantor

Share All sharing options for: 12 things to know about Dave Brat, the man who took down Eric Cantor

Dave Brat, an economics professor from Randolph-Macon College in Ashland, Virginia, came out of nowhere to defeat House Majority Leader Eric Cantor in a primary Tuesday. Who is Brat?

1) Brat was running as an anti-immigration hardliner. "The central policy issue in this race has become Cantor's absolute determination to pass an amnesty bill," Brat told Breitbart News days ago. "Cantor is the No. 1 cheerleader in Congress for amnesty." He indicated that Cantor was partly responsible for the child migrant crisis, because he had indicated support for legislation that would have legalized the status of unauthorized children. "Once you announced that kids are welcome, they're going to head in," Brat said. Cantor responded to Brat's accusation by sending out his own anti-amnesty campaign literature: 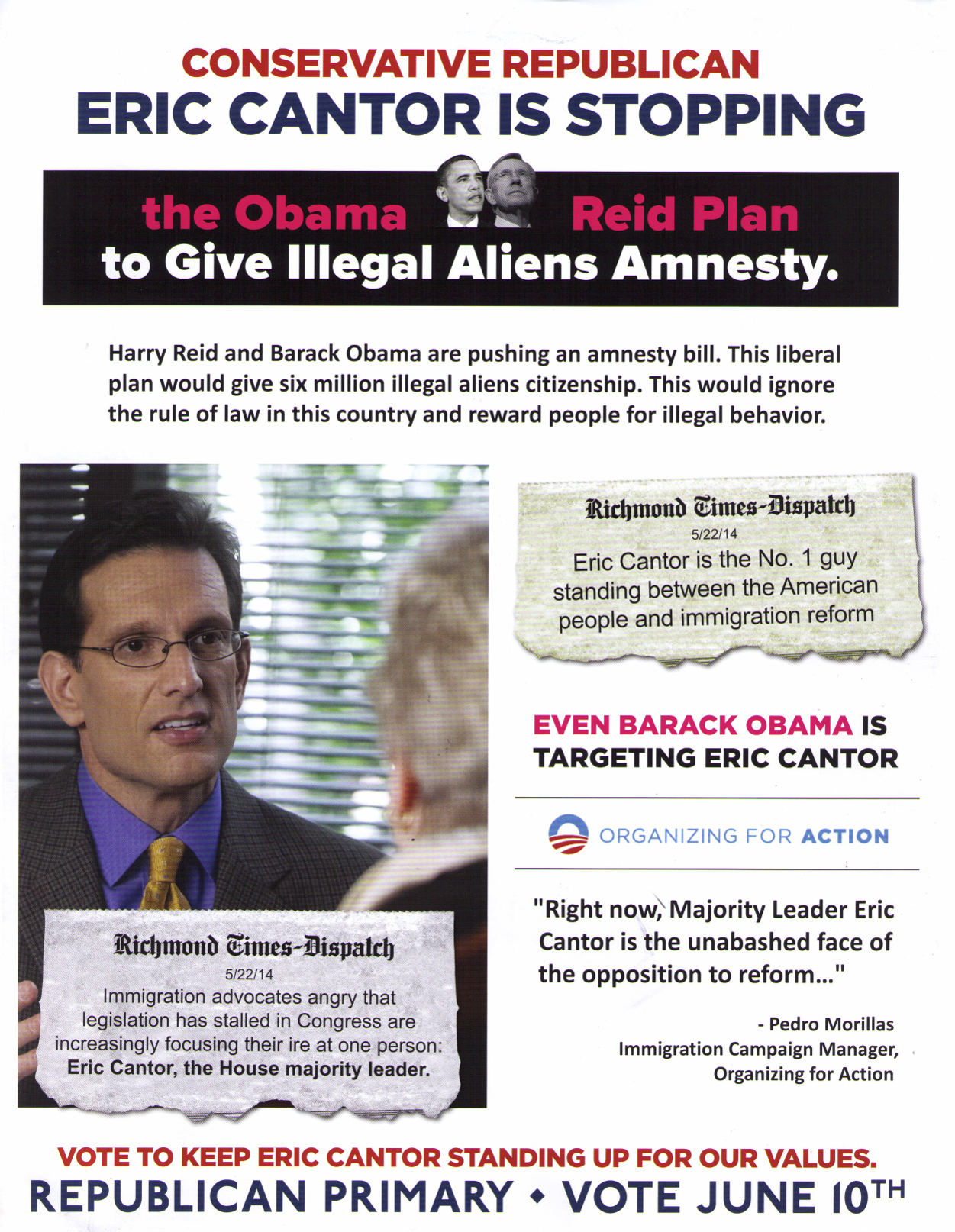 2) Brat co-authored an analysis of Ayn Rand. According to his CV, Brat co-wrote and presented "An Analysis of the Moral Foundations in Ayn Rand" in 2010. "Brat says that while he isn't a Randian, he has been influenced by 'Atlas Shrugged' and appreciates Rand's case for human freedom and free markets," Betsy Woodruff wrote in the National Review.

"He had school stuff to take care of. It's the week before finals."

3) Brat cancelled key meetings with conservative outside groups because of exams. Past successful conservative primary challengers have relied on support from well-funded outside groups. But when Brat was supposed to travel to DC and attend both Grover Norquist's breakfast with conserative activists and a similar lunch named after the late operative Paul Weyrich, he had to cancel at the last minute. His campaign manager told the Washington Post's Robert Costa, "He had school stuff to take care of. It's the week before finals."

4) Cantor raised 25 times as much money as Brat did. The House Majority Leader raised nearly $5.5 million in this election cycle, according to OpenSecrets. But Brat raised a mere $206,000, according to the most recent reports. Cantor's campaign spent over $168,000 just at steakhouses — which appears to be more than Brat spent on his entire campaign. 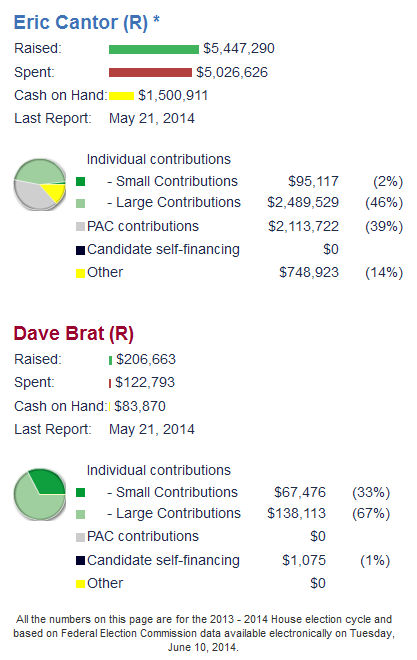 5) Brat's opponent this fall will be a professor from the same college. Amusingly enough, the winner of the Democratic nomination for Cantor's seat is Jack Trammell, a sociology professor and director of disability services at Randolph-Macon College. Trammell has put forth an education-focused platform calling for student loan forgiveness, and reform of special education and college access. According to his website, "Jack's history with the Democratic Party goes back to his days at Grove City College, where he experienced a de factor [sic] ban in the school newspaper due to his Democratic views."

6) Brat's students love him — and think he's hot. RatemyProfessor.com shows Brat is pretty well-liked as a professor. He gets a 3.4 overall, and he even merits a chili pepper for his good looks. "He's so charming and really knows how to incorporate real world examples to keep the class exciting and relateable (sic)," writes one student. "Plus he's total eye candy!!"

7) Eric Cantor attacked him as a "liberal college professor." There's even a little cartoon of Brat in front of a chalkboard:

8) Brat thinks NSA bulk surveillance programs are unconstitutional. As Timothy B. Lee writes here, Brat has called for "the end of bulk phone and email data collection by the NSA," and has argued that the NSA's data collection efforts violate "our Fourth Amendment right to privacy."

9) Laura Ingraham is a huge Brat fan. Moneyed conservative outside groups weren't a major factor in this race. But certain endorsements from conservative media figures may have been. Laura Ingraham, a nationally syndicated talk radio host who has guest hosted on Fox News, endorsed Brat and attended a rally for him last week.  "The establishment has had its way for election cycle after election cycle," she said. Conservative author Ann Coulter also endorsed Brat. She objected a Cantor remark that "immigration reform could be an economic boon to this country," called it "baby-talk," and said Cantor must be stopped.

10) Brat wrote a scathing, seemingly unpublished book about the economics profession. On his site, Brat has posted a 2005 manuscript called The Philosophy of Economics: A History of Science, Method and Ethics, in which he is ruthlessly critical of the economics profession. He writes that his "agenda" is "to illustrate, by the internal logic of economics alone, that the dominant methodology in economics is in serious question, if not dead." Check out Zack Beauchamp's analysis of Brat's academic work here.

11) Brat has a a Master of Divinity in Theology from Princeton Theological Seminary. "Before deciding to focus on economics, he wanted to be a professor of systematic theology and cites John Calvin, Karl Barth, and Reinhold Niebuhr as influences," Woodruff reports.

12) Brat headed a controversial, Randian-funded economics program at his college. As Danielle Kurtzleben explains here, this is the BB&T Moral Foundations of Capitalism program, which has been controversial at other universities for including Ayn Rand's ideas in its curricula. The program's funder, former BB&T bank CEO John Allison, has been a long-time promoter of Rand's philosophy.