Share All sharing options for: Diabetes is on the rise — and it's costing the US billions each year

Diabetes is on the rise in America, according to a new report from the Centers of Disease Control and Prevention.

More than one-fourth of the cases are undiagnosed, which means 8.1 million people most likely don't know they have diabetes.

The rise comes with a large financial burden for the US. The CDC projects the direct and indirect costs of diabetes total $245 billion, with $176 billion going to direct medical costs and the rest going to indirect costs like disability, work loss, and premature death.

The problem is poised to get a lot worse, too. The CDC estimates that 37 percent of US adults aged 20 and older, or about 86 million Americans, have prediabetes, when blood sugar levels are alarmingly high but not quite high enough to be classified as diabetes. This population is at a high risk for eventually developing diabetes, although lifestyle changes can prevent the disease.

What is diabetes, anyway? 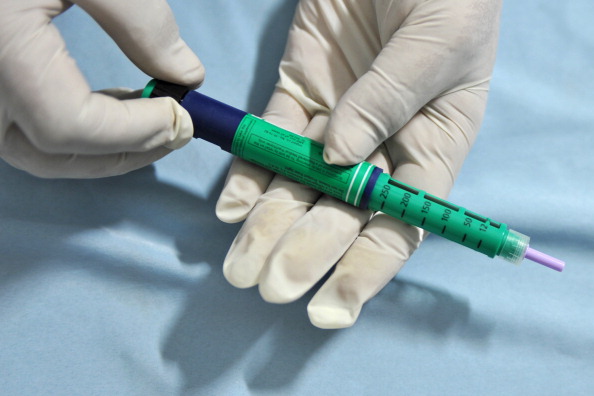 There's two kinds of diabetes: Type 1 is relatively rare and believed to be caused by genetic and environmental factors, while type 2 is much more common and brought on by genetic predispositions, poor diet, and lack of exercise.

Both types lead to high blood sugar, which can then lead to serious conditions like heart disease, stroke, blindness, kidney failure, and lower-limb amputation.

Diabetes can be dealt with in a few ways. Type 1 is managed by directly injecting or pumping the body with insulin, the hormone that helps manage blood sugar. Type 2 is usually treated by adhering to a healthier diet and increasing exercise.

Diabetes is more prominent among men, minorities, and older populations

Younger people are much less likely to have diabetes. The CDC estimates, in fact, that more than one in four Americans 65 and older have the disease. 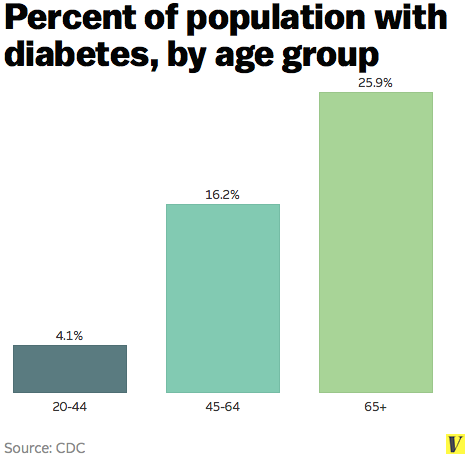 Racial and ethnic minorities also have much higher rates of the illness.

Some experts blame added sugar for the rise

The CDC's latest report offers no explanation for the rise. But, at least with type 2 diabetes, the rise of diabetes is linked to America's increasingly sedentary lifestyle. It's no coincidence that obesity is becoming a bigger problem as diabetes gets worse as well.

Some experts have also fixated on added sugar in particular to explain America's struggles with obesity and diabetes.

"The data says that the dose on average that is safe is six to nine teaspoons of added sugar per day. Currently, Americans are at 22 teaspoons of added sugar per day," said Robert Lustig of the University of California, San Francisco, in a previous interview. "That excess is driving obesity, diabetes, lipid problems, heart disease, cancer, dementia, fatty liver disease — virtually every chronic metabolic disease that you can think of is being driven by this excess of sugar."

Other experts dispute Lustig's focus on sugar. They argue the problems with the American diet are much more complicated. People should, according to Lustig's critics, focus on improving their diets and reducing excess across the board, instead of demonizing one ingredient or food.

Whatever the specific cause, everyone at least agrees on two changes that Americans could make to help prevent diabetes: eating healthier and exercising more often.

Update: Added more context about how type 2 diabetes is developed.