6 months later, Democrats have no regrets about using the nuclear option

Share All sharing options for: 6 months later, Democrats have no regrets about using the nuclear option

When Democrats invoked the nuclear option last November — lowering the cloture threshold on nearly all nominations from 60 votes to 51 votes — Senate Minority Leader Mitch McConnell issued a warning. "You'll regret this, and you may regret this a lot sooner than you think."

Six and a half months later, the verdict is in — Democrats regret nothing. In some ways, the nomination process has become more time-consuming. But Democrats are getting the nominees they want — especially federal judges. Here's what life in a post-nuclear Senate is like: 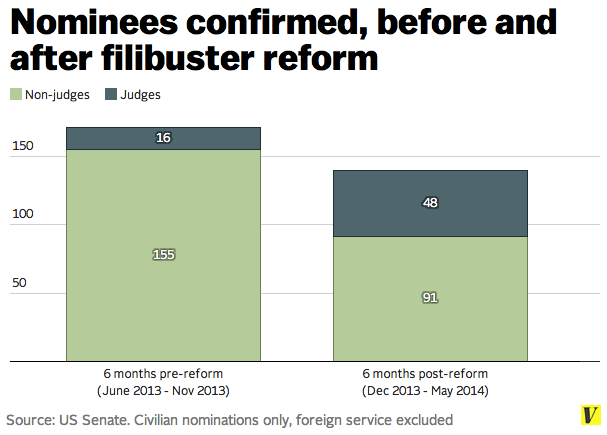 Contrary to some predictions, the GOP hasn't reacted to the rules change by slowing the confirmation process to a crawl. The above chart seems to indicate that fewer nominees have been confirmed overall — but the Senate was in session for fewer days in the latter 6 months. When one accounts for that, the confirmation pace seems unchanged — the Senate has confirmed about 2 nominees for each session day.

The big change, though, is how many of those confirmed nominees are now federal judges with lifetime appointments. Compared to most executive branch nominees, who will serve only two and a half more years, judges seem more consequential to Obama's legacy. And in a post-nuclear Senate, far more are getting through. Here are the numbers broken down by district courts and appellate courts: 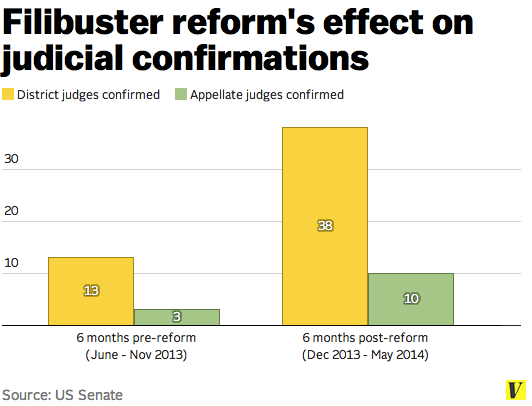 There were 18 appellate court vacancies when the nuclear option was invoked, many of which had existed for years. Now, there are only 10. The main hold-up in filling some of the others is a separate issue — the Senate's "blue-slip" tradition of deference to the senators from the nominees' states. "Except for those judicial nominees with Republican home state senators, by and large it's no longer a hurdle to get judges confirmed," Binder says. Indeed, no judicial nominee that's reached the floor since the rules change has been blocked.

2) Every judge is now being filibustered by Republicans

There's a cost to these confirmations — Republicans have responded to the rules change by filibustering every single judicial nominee. Though these filibusters can be beaten with 51 votes, Senate rules require several hours of floor time to be used for that. "Many fewer nominations go through by unanimous consent," Robert Dove, the former Senate parliamentarian told me. "Senate Republicans are determined to make Senator Reid pay for what he did, and they do that by simply dragging out the process." And many of these nominees are completely uncontroversial, and are later confirmed unanimously or nearly so — but they're filibustered anyway.
Yet compared to the pre-nuclear status quo, this isn't so different. The threat of a filibuster hung over every single judicial nominee then — and filibusters were much more likely to be successful. So far fewer judicial nominees could be brought forward in the first place. "I think the Democrats will get what they want, in terms of the courts," Dove says. "I don't think there's any question about that. He has a lot of time to pack the various courts with his nominations" Binder agrees, and says the GOP is only "nibbling at the edges."

Several district judges can now be confirmed in one day
Traditionally, if a filibuster is used, 30 hours of precious Senate floor time had to elapse before a nominee is finally confirmed. But a January 2013 deal between Reid and McConnell modified those restrictions for many lower-level nominees — including district judges. Now, only 2 hours must elapse between a district judge's cloture vote and confirmation. "That change was very smart for the Democrats," says Gregory Koger, author of a book on the filibuster's history. "Shortening the time lags can really change the way the filibuster works."
When the deal first agreed to, little changed — because Democrats still needed Republican support for every single district judge to reach the 60-vote threshold. But now that GOP support is no longer necessary, the Senate can confirm several district judges in one day, even if they're being filibustered — and use just two hours of floor time for each. "We're able to do larger numbers, with greater success of confirmation," said Faiz Shakir, a staffer for Harry Reid. As a result, 41 district judges have been confirmed since the nuclear option was invoked.

A similar modification was made for subcabinet nominees — only 8 hours of floor time must be used before they're confirmed. However, 30 full hours must still pass to confirm Cabinet officials, Supreme Court judges, and appellate judges — but those nominations come up less often, so it's not such a big deal.

4) On executive branch nominees, not much has changed

Back in December of last year, the Republicans first responded to the rules change by filibustering every Obama nominee. Since then, they've backed off. Now, the vast majority of executive branch nominees have gone through without a cloture vote. And every executive branch nominee except one — Debo Adegbile, Obama's pick to head the Department of Justice Civil Rights Division — has been confirmed. (7 Democrats voted against cloture for Adegbile.) 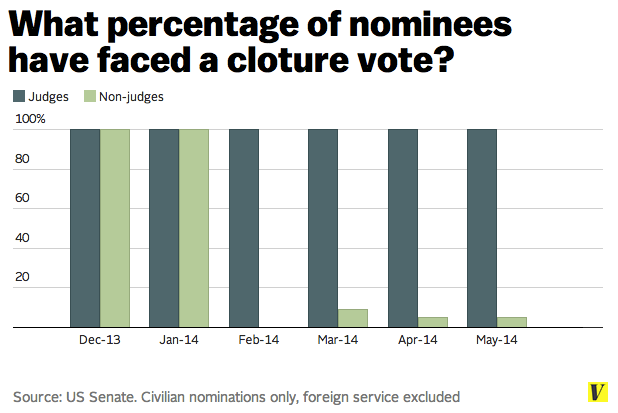 The major change is that Obama can now fill key executive branch positions with nominees he prefers, without needing Republican votes. Before the rules change, 60 votes would've been needed to confirm Janet Yellen as Federal Reserve chair, or Sylvia Mathews Burwell as HHS Secretary, or whoever Eric Shinseki's replacement as VA Secretary will be. But now Obama can be confident that those nominees will be confirmed without much difficulty — barring a mass abandonment by Democrats, as happened with Adegbile.

When Democrats pushed through this unprecedented rules change, it was very unclear what the consequences would be for the Senate. 6 months later, it seems clear that the chamber has survived. The Democrats got what they wanted, and the GOP hasn't paralyzed the chamber.

now that the precedent has been set, the nuclear option will probably be used again

The big question is what Reid's success means for future rules changes. The 60-vote threshold still exists for legislation and Supreme Court nominations. While the GOP's control of the House means it's not particularly urgent for Democrats to reduce the threshold for filibustering legislation, a sudden Supreme Court vacancy could force another confrontation. But Binder is skeptical: "The Democrats took a pretty big step here, and the political costs were bearable in this particular case," she says. "Whether that's generalizable to other areas, it's hard to tell. I think they've gone as far as they're going to go for now."

Then, there's the question of what Republicans will do if they retake the chamber. "I expect that when the Senate — and I say when — goes Republican after 2014, there will be a whole series of rules changes proposed by new majority leader Mitch McConnell," says Dove, the former parliamentarian. However, it's far from clear what that would entail. There's a counterintuitive case that, as long as Obama's president, it would actually benefit the GOP to revert to the 60-vote nomination threshold — that would make it easier for them to block Obama's nominees. However, if a Republican wins the 2016 election, all bets are off. "The Democrats have definitely left the door open for similar reform," Koger says. Sooner or later, now that the precedent has been set, the nuclear option will probably be used again.