The rise of the servant economy

Share All sharing options for: The rise of the servant economy

If you hate doing your housework, you're not alone, but as it turns out, you have a lot of options for how to get your unwanted tasks off your plate.

Instacart will match you up with someone to bring you groceries. Washio will find someone to pick up, clean, and deliver your laundry. Shyp will pick up and mail packages for you. Postmates will deliver food. Taskrabbit will find a workers to do any number of errands, from assembling Ikea furniture to making CVS runs. And there are dozens of others.

Most of these follow one of two systems: either pay a set fee for your task of choice or say what you're willing to pay. Willing workers will do your task, and the company that matched you takes a cut.

While the rise of these services means extra cash for people doing odd jobs, they also point to deeper, unsettling trends going on in the US economy.

1. The middle is falling out of the job market

The New York Times' Farhad Manjoo wrote in May that Instacart and services like it could "redefine how we think about the future of labor." That sounds great in an era when technology replaces cashiers with self-check-out machines and automates assembly-line jobs out of existence.

But the growth of TaskRabbit and other similar firms could mostly mean yet more job growth at the lower end of the spectrum. These low-skill jobs have made up the bulk of job growth over the last decade or so, as the Dallas Fed showed in a recent paper. 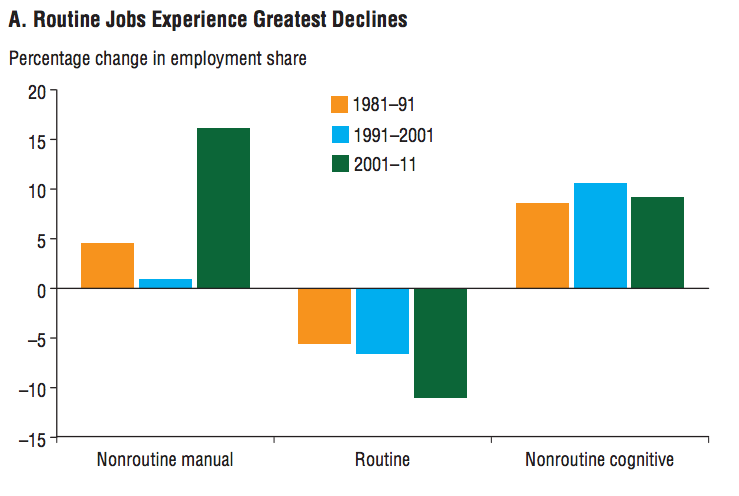 While jobs fall out of the middle, new jobs are created at the top and bottom. And those jobs at the bottom tend to be "nonroutine manual" jobs: those that require few skills and little problem-solving. Many of these errand jobs fit this bill perfectly, involving deliveries and other rote tasks.

These new errand jobs can feature high pay — Instacart, Manjoo noted, can pay $30 an hour. But a major problem is finding steady work — no grocery run takes eight hours. Journalists who have tried the Taskrabbit life themselves have written that trying to cobble together enough jobs to make a real living can be virtually impossible. (That said, TaskRabbit has experimented with making some workers full-time temps.)

Performing odd jobs also largely means doing work that doesn't boost a person's resume much. It is possible to get work that's more medium-skill on these websites — administrative work or proofreading, for example — and some services, like Washio, do say that some of these workers can after a while get jobs within the company. But many of the errand jobs still involve simply carting goods around or doing other simple manual tasks.

Grocery-fetching may be a good way to earn money, but if the wave of the future looks like delivering goods, not to mention renting out rooms on Airbnb and giving people Lyft rides, the question is whether those earners accumulate enough new skills, knowledge, and training to eventually help them find new jobs and, ultimately, boost the economy. 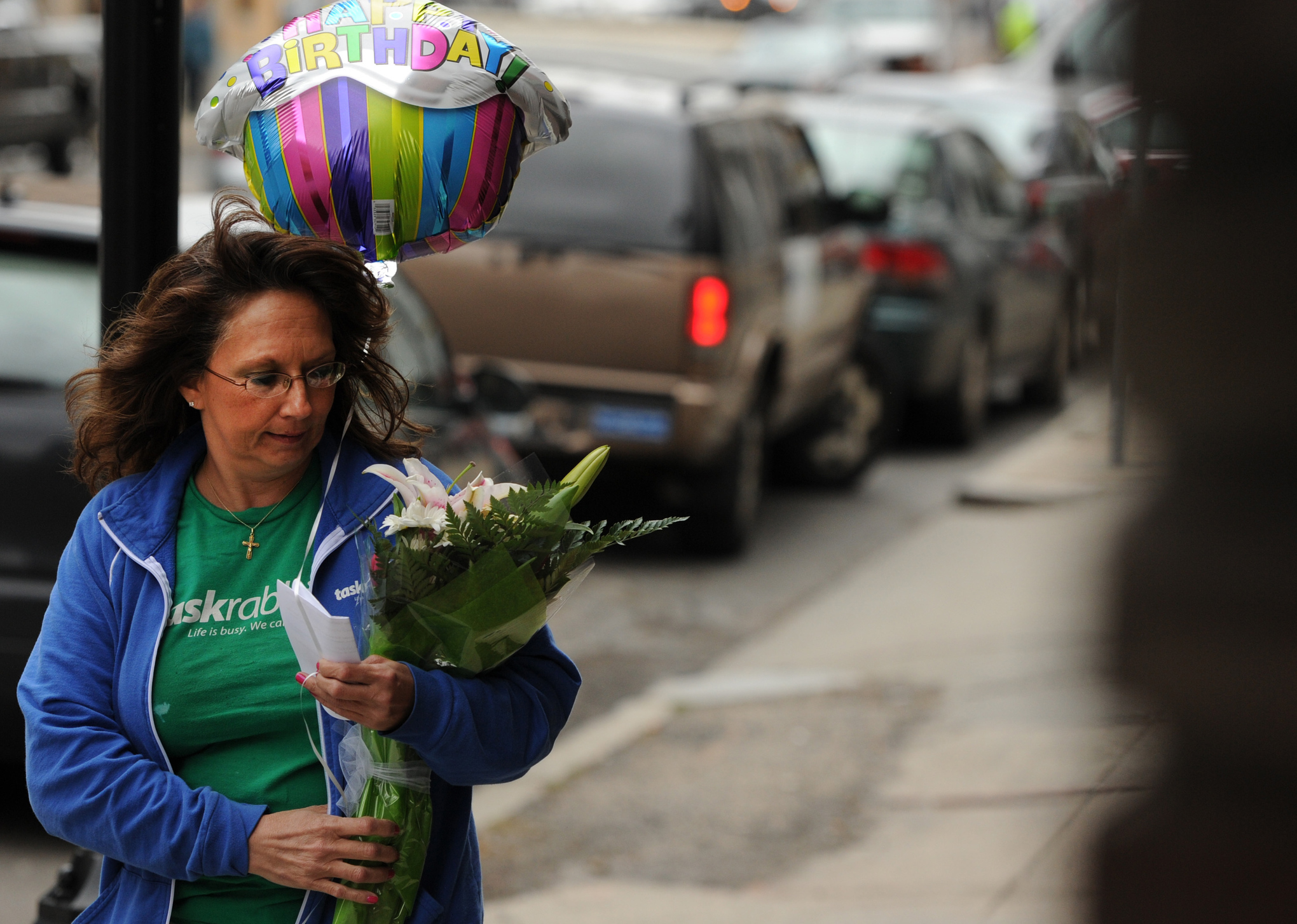 A TaskRabbit makes a flower delivery to a lucky customer.

One reason people are buying these services is because they want more time on their hands. The Labor Department's American Time Use Survey shows that as Americans get more educated, they have less leisure time. 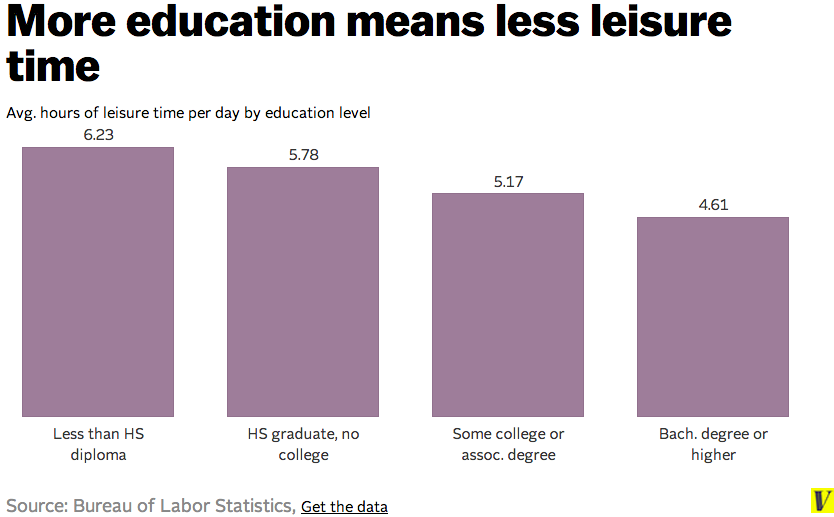 That wasn't always the case. As The Atlantic's Derek Thompson showed in May, more education has only in the last few decades become synonymous with less leisure time. 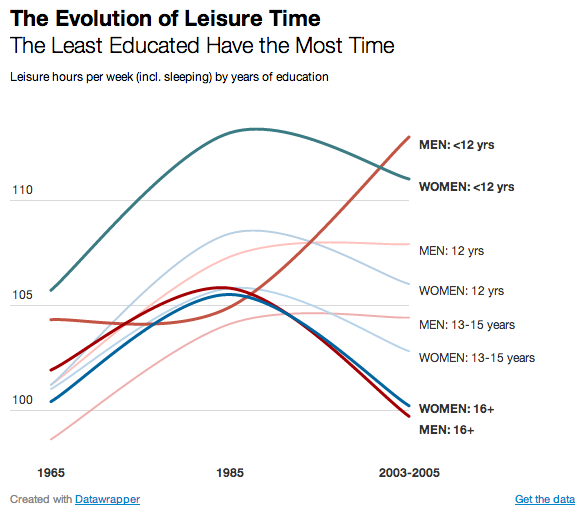 "the trend is toward increasing hours at work by more educated and affluent workers."

"If you look at who is working more, the same, and less over the past few decades the trend is towards increasing hours at work by more educated and affluent workers," says Chuck Darrah, professor of anthropology at San Jose State University and author of Busier than Ever, a book about American families' time use.

"The total hours of everyone else has not significantly increased, although there is a rise in non-standard hours, especially among many workers paid less — precisely the ones doing the drudgery chores [for companies like Taskrabbit and Washio]," he says.

This is not to say that all of these new errand-running workers are low-educated; in fact, most of Taskrabbit's have college degrees. As The Verge reported in 2013, 70 percent of the company's workers have at least a bachelor's degree. It seems that many people taking these jobs either have fallen on hard times or just want a little money on the side.

But what may be happening with these new errand services is that those time-strapped, richer Americans who still have jobs have found a way to buy a bit of extra time. And they're buying it from the people who most need jobs — those with no work and lots of time on their hands.

All of these factors combined have made it possible to buy the sort of help that previously would have been out of reach.

Though those higher-educated Americans likely to earn far more than their least-educated peers, many don't have the money for a full-time housekeeper. Being able to spend $30 a week to get laundry done, however, is much more doable, and technology has made that transaction possible. Services like Washio and TaskRabbit exploit the intersection of these trends. The rise of errand-service companies may be a classic example of companies popping up that create demand that customers didn't even know they had. The question is how much that demand will translate into a demand for unsteady, low-skill labor.