The Vox Lime Index: making sense of the Limepocalypse

Share All sharing options for: The Vox Lime Index: making sense of the Limepocalypse

by Danielle Kurtzleben and Alex Abad-Santos

Cinco de Mayo is over, and it seems Americans have moved on from freaking out about the lime shortage. But the problem is far from over.

According to the USDA, the average price per lime was 54 cents nationwide as of May 2, up from 30 cents a year ago — an 80-percent jump in one year. But those prices can vary widely nationwide.

Vox selected a few midrange grocery stores from cities nationwide and will be tracking lime prices there until Americans can once again buy all the limes they want cheaply. For now, here is where those stores have priced limes, as well as what the USDA says is the national average price for limes. 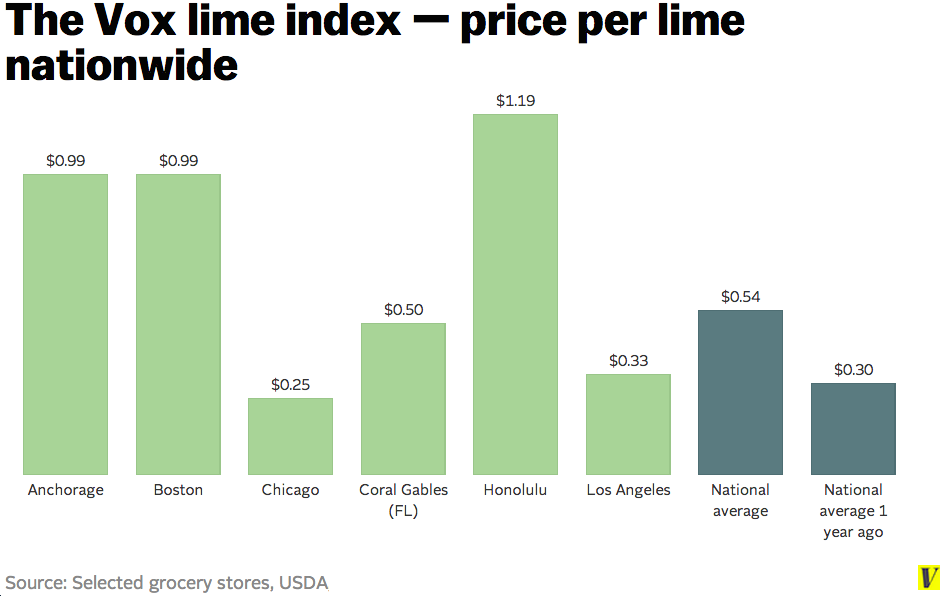 This is the thing about shortages, though. When supply drops, the prices go up until there's equilibrium. When prices go up enough, it's not a shortage anymore. Instead, there are just people who don't want to shell out $2 for a lime.

While the shortage is a new phenomenon, it was in fact years in the making. As recently as 1990, the US supplied half of its own limes, but then a series of events conspired to cut lime production and hold it down. At the time, Florida produced the bulk of all US limes.

NAFTA. In 1994, Florida's citrus farmers were still recovering from Hurricane Andrew, which in 1992 had obliterated nearly three-quarters of the state's citrus trees, according to a recent article by researchers at the University of Florida. But then the US passed the North American Free Trade Agreement, which reduced tariffs on limes coming from Mexico. That treaty further put the squeeze on Florida's lime farmers, and lime production shifted even more to Mexico, which could now provide limes more cheaply to US consumers.

from 2002 to 2006, florida lime growers had to kill their trees to combat a crop infection

Tree infections. A pesky disease called citrus canker struck in the early 2000s, and from 2002 to 2006 the state undertook an eradication program. That meant getting rid of nearly all the lime trees in Florida.

"In nine months they had pushed and burned just about all the acres of limes. plus there was a prohibition for replanting the citrus for about five years," says Jon Crane, professor of horticulture at the University of Florida. "People were left without their lime groves, and so they planted other crops."

Lime tree biology. Planting limes isn't as simple as putting a few trees in the ground and waiting a few months for fruit to appear. It's more like a few years, explains Crane, meaning bouncing back from any sort of hit to crop production is a long-term affair.

"If I planted a lime tree now, I would just begin production in year three, and would not be in high production until year seven," he says.

Put those together, and you have a nation that imports virtually all of its limes, the vast majority of which come from Mexico. The below graph shows trends in US production and consumption of Tahiti limes, the main type of lime Americans eat.

Mexico is the world's chief lime exporter, so when its supplies dry up, there aren't exactly a ton of options for other suppliers. So when trouble struck Mexico's lime crops this year, US imports fell off. That trouble came in a few forms: another citrus disease called huanglongbing hurt Mexico's crops, winter weather cut into lime production, and Mexican cartels started extorting farmers, imposing fees on truckloads of limes.

Those are the issues from the supply side, but you don't get a shortage without demand as well. And that plays a huge part. Avril Lavigne concerts could suddenly become scarce, but since the demand isn't high the American public would be unbothered. But people actually really like limes. And American lime usage per year has grown by nearly six times since the 1980s: 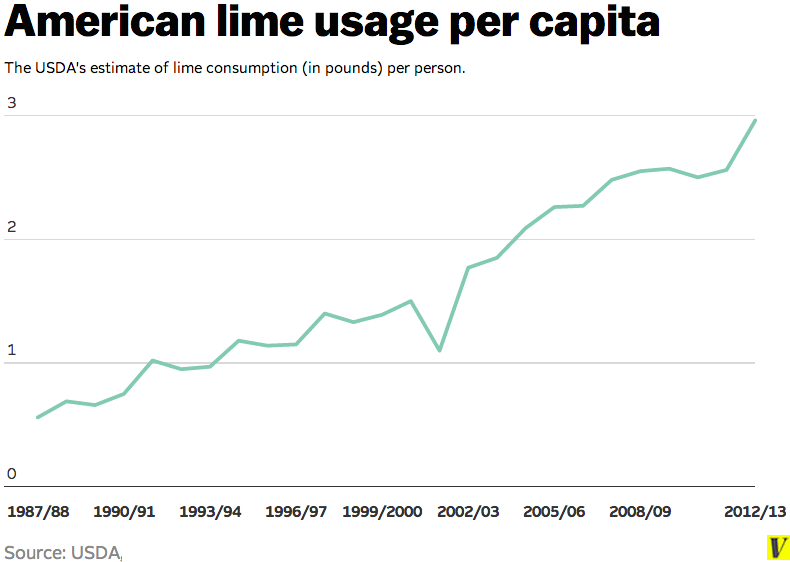 Experts say that one of the major reasons lime demand and consumption has gone up over the years might be the demographic shift of the U.S. population.

"A larger percentage Americans are of Hispanic and Asian heritage now than they were in the United States of 40 years ago, so a larger proportion of people living in the country have culinary backgrounds well-suited to the use of limes," Huffpo's Joe Satran wrote in 2011.

Part of that shift also affects taste. More Americans are trying foods today that 20 or 30 years ago might have been too esoteric or adventurous. Foods like Phở and sriracha are a lot more accessible now. And dishes like pad thai are considered safe. But the big shift we've seen over the years has been in Mexican food.

That affinity for Mexican food has led to big chains and businesses investing in more Mexican restaurants and foods. Bloomberg Businessweek reports:

Chipotle, of course, uses a lot of limes, further proving the universal truth that limes are pretty much perfect.

We'll be tracking lime prices all summer as a window into the economics of how we eat, drink, and relax. Have a suggestion for a lime story? Send it to danielle@vox.com or alex@vox.com.

Corrected. This article originally stated the Anchorage grocery store we called was Safeway. It is, in fact, a Carr's.