Syphilis is making a comeback

Share All sharing options for: Syphilis is making a comeback

Syphilis, once nearly eliminated in the US, is on the rise again — and gay men account for a bulk of the increase. 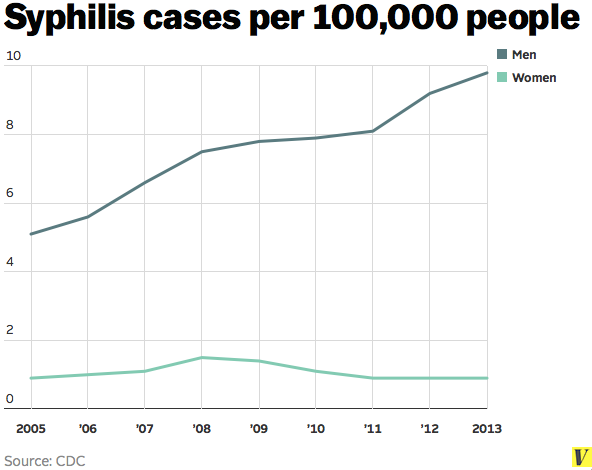 Many of these cases occurred among gay men, but not all jurisdictions reported sexual orientation. In areas that did report sexuality, 83.9 percent of all syphilis cases in 2012 were attributed to men having sex with men, up from 77.7 percent in 2009.

CDC researchers linked the rise to several issues: risky sexual behaviors (multiple and anonymous partners), poor reporting practices in the health-care system, and anti-LGBT cultural stigmas that make it harder for gay men to open up to doctors about their full sexual histories.

The CDC, in response to the outbreaks, advised the general population to remain cautious of the disease and adopt safer practices, including less sex partners and better use of latex condoms. Doctors and patients, CDC researchers said, should also do a better job reporting syphilis diagnoses to current and former sex partners, and health officials should take steps to better target and serve LGBT populations.

The good news is syphilis can be easily treated with antibiotics if caught early. The bad news is the antibiotics can't reverse damage done by the disease, so it needs to be caught as soon as possible to avoid permanent harm.