Why can't you remember being a baby? Science explains.

Share All sharing options for: Why can't you remember being a baby? Science explains.

These questions have puzzled people for ages. And a new paper in the journal Science provides the first evidence of a physical mechanism that might explain this odd phenomenon.

The paper, which studied rodents, concludes that the new cells that are constantly being formed in very young brains may be messing up the circuits that hold memories.

Mammals' brains make new cells throughout life — a process called neurogenesis — but babies of some species, including humans, produce new neurons at a much higher rate. And this process is particularly active in the hippocampus, which deals with memories and learning.

Most of the time, neurogenesis leads to better learning and improved memory. But there's a catch. According to the Science paper, the extremely high rates of neurogenesis seen in very young brains can actually increase forgetfulness. These new neurons could be crowding out the old circuits that hold memories.

Here's how scientists hit on this finding: First, they instilled memories in various animals  — creating an association between a place and a mild electric shock. Then they tweaked the animals' rates of neurogenesis and saw what happened to those memories later on.

Of mice and memories

The scientists then showed that they were able to stop infantile amnesia: decreasing the birth of new neurons in young mice made those mice remember things better.

They also tested out two other species of rodents that are more mature than mice at birth: the guinea pig and a Chilean animal called a degu (scroll down for an adorable picture). Young guinea pigs and degus have lower rates of neurogenesis. And, it turns out, those species don't normally experience infantile amnesia. But when researchers artificially increased the rates of neurogenesis in young guinea pigs and degu, they couldn't hold on to memories as well. 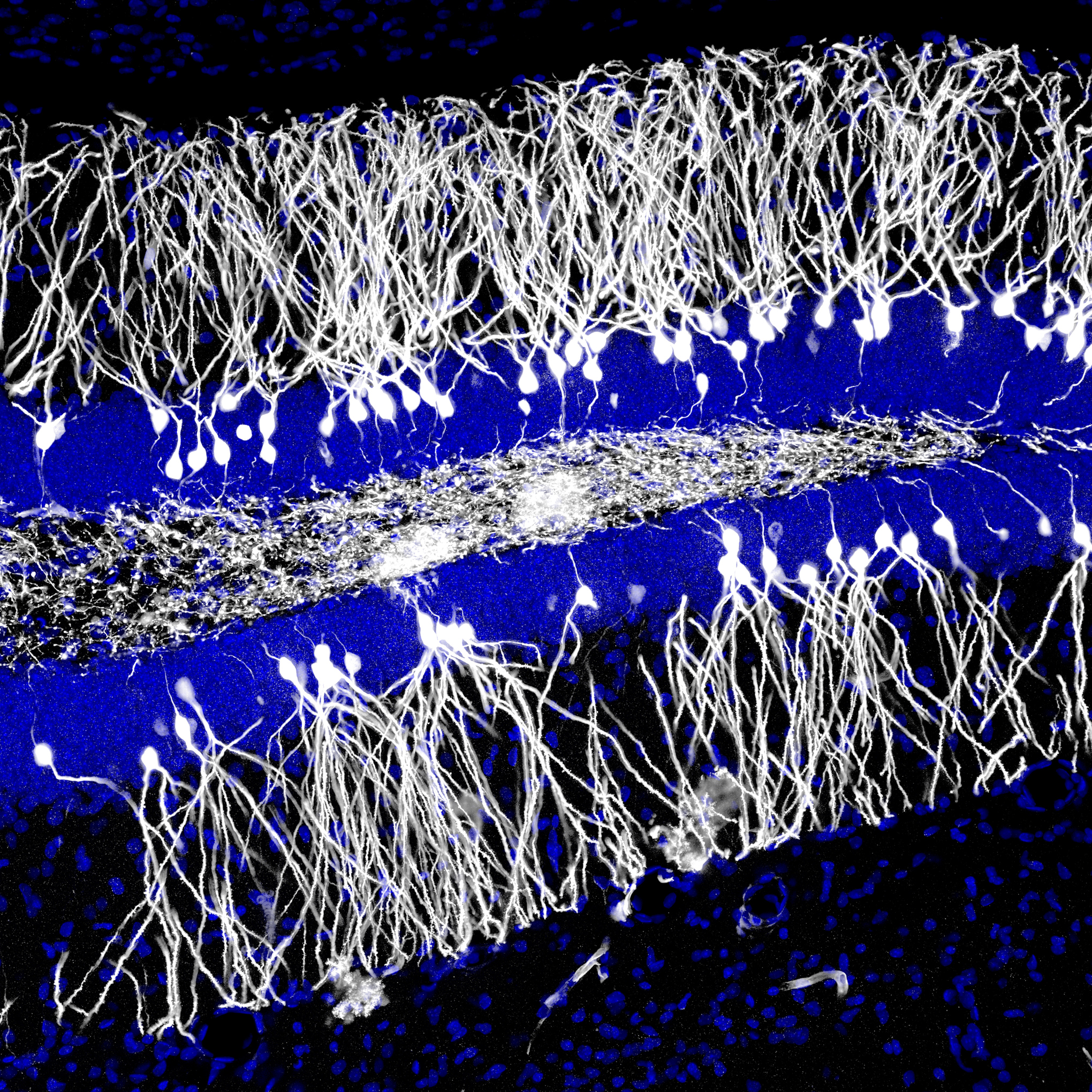 Newly generated neurons (white) in the hippocampus region of the brain. Jason Snyder

There have many hypotheses about infantile amnesia in the psychological literature over the years, such as the notion that it stems from young children's lack of language skills or emotional development. (Freud thought that infantile amnesia helped repress memories of childhood trauma, but that's not really mainstream anymore.) The Science paper doesn't necessarily rule these ideas out — it might even complement them.

"I think [the new hypothesis] provides a very compelling mechanism for why we don't remember infantile memories," says Mazen Kheirbek, who studies the birth of new brain cells at Columbia University.

However, Kheirbek points out that it might not be the new neurons themselves but the new learning that new neurons allow that makes the difference. "Perhaps the forgetting seen here is actually due to the increased ability to learn new things," he says. "So there is a tradeoff there, preserving the older memories may come at the cost of making new ones."

And a lack of memories — both in childhood and adulthood — isn't necessarily a bad thing. "Some kind of forgetting is important for memory. There's finite capacity," says Paul Frankland, a neurobiologist at the Hospital for Sick Children in Toronto who led the study. "You need to increase the signal to noise ratio. You want to get rid of all the junk, and you want to remember the important features and important events."

Of course, there's a huge caveat here: these experiments were not performed in people. They were done in rodents — so, strictly speaking, they tell us about these rodents. But given the similarity of mammalian brains, it is reasonable to think that something similar is occurring in humans.

The trouble is that you can't go around cutting open people's brains to count how many new neurons they have like you can with mice. So pinning down the exact mechanism in humans will be much more difficult. 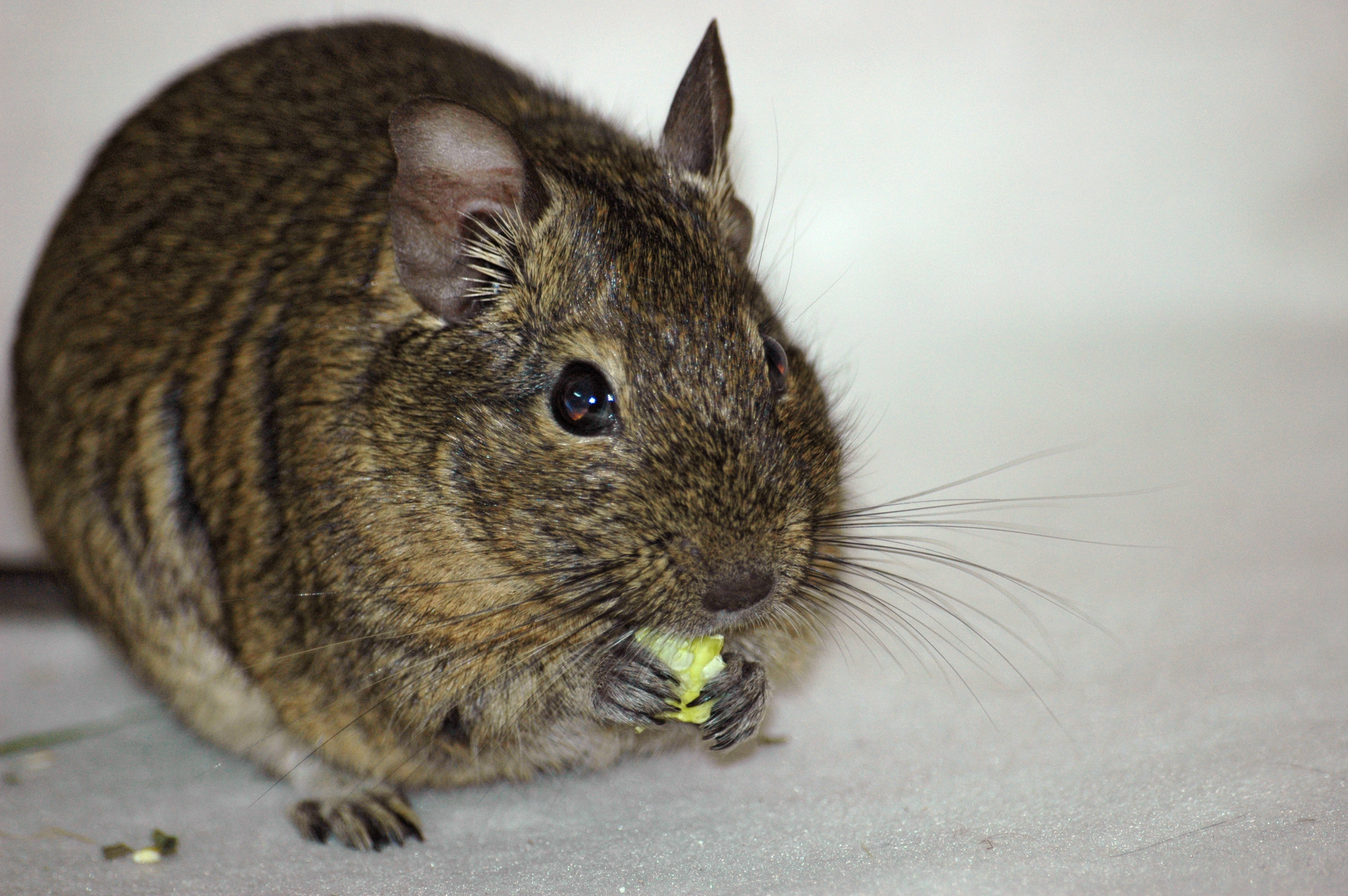 In case you were wondering what a degu looks like, here's a degu. Apparently they can be handy for science. Some people also keep them as pets. (Vera Buhl/Wikimedia Commons)