Janet Yellen testified before both the House and Senate this week about the state of the economy. And during her testimony, as in most of her speeches in recent months, she talked about something called "slack."

Yellen seems to argue at every opportunity that there is still plenty of labor market "slack." What is that? And why is she hammering this point so much? Here is a quick explainer about why this is such an important topic for the Fed chair.

What is labor market slack?

The monthly jobs report provides a lot of potential measures of labor market slack, all with their own set of virtues and limitations.

First, there is the basic measure of unemployment: the number of people who want work but can't find it. That only goes so far, since the unemployment rate only counts jobless people who are actively looking for work. But there are also discouraged and other marginally attached workers — people who want to work but aren't looking. And then there are people who want to work more — the part-time employed who would like more hours. Take all these together and you have a potentially much larger supply of labor ready and willing to work but without the opportunity to do so. 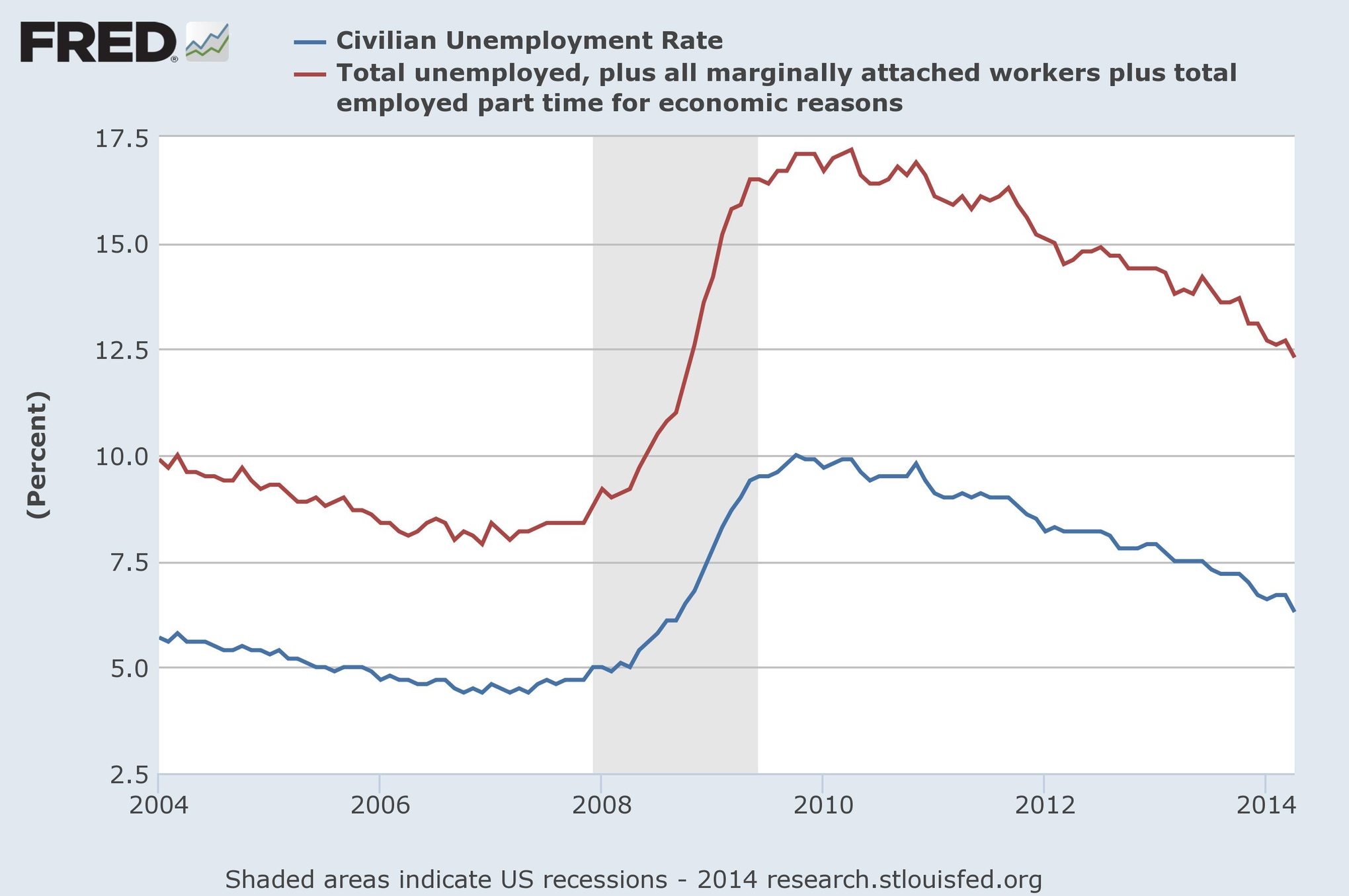 That really high U-6 rate could be seen as an indicator of slack. Yellen has also pointed to flat wage levels as evidence of a slack labor market. If workers were in shorter supply, they could argue for higher salaries; the fact that salaries aren't rising suggests that's not happening.

We have numbers that tell how much slack there is, so how is the amount of slack even up for debate?

Part of the issue is that the recession messed up how economists think about slack, says one economist. Today, the headline unemployment rate tells experts much less than it did before the crash. So though it's been declining, it's not providing a full picture.

"I think that there's been a growing concern that the unemployment rate itself is not catching the real slack in the labor market," says Adolfo Laurenti, deputy chief economist at Mesirow Financial. "We really need to assess the broader measure of the labor market, such as the participation rate, to get a better sense of how strong or how weak in this case the overall labor market is."

So economists can think about that U-6 rate or the labor force participation rate (which measures how much of the population is working or trying to work, and is at a 35-year low) as a measure of slack. But those have limitations, too. Neither they nor the regular unemployment rate tell us about one of the most concerning aspects of the downturn: the unusually high proportion of unemployed people who've been so for six months or longer.

The long-term unemployed are generally less likely to find a job than their shorter-term unemployed counterparts, whether because they've lost some of their skills or because of the stigma of having been out of work for months at a time. 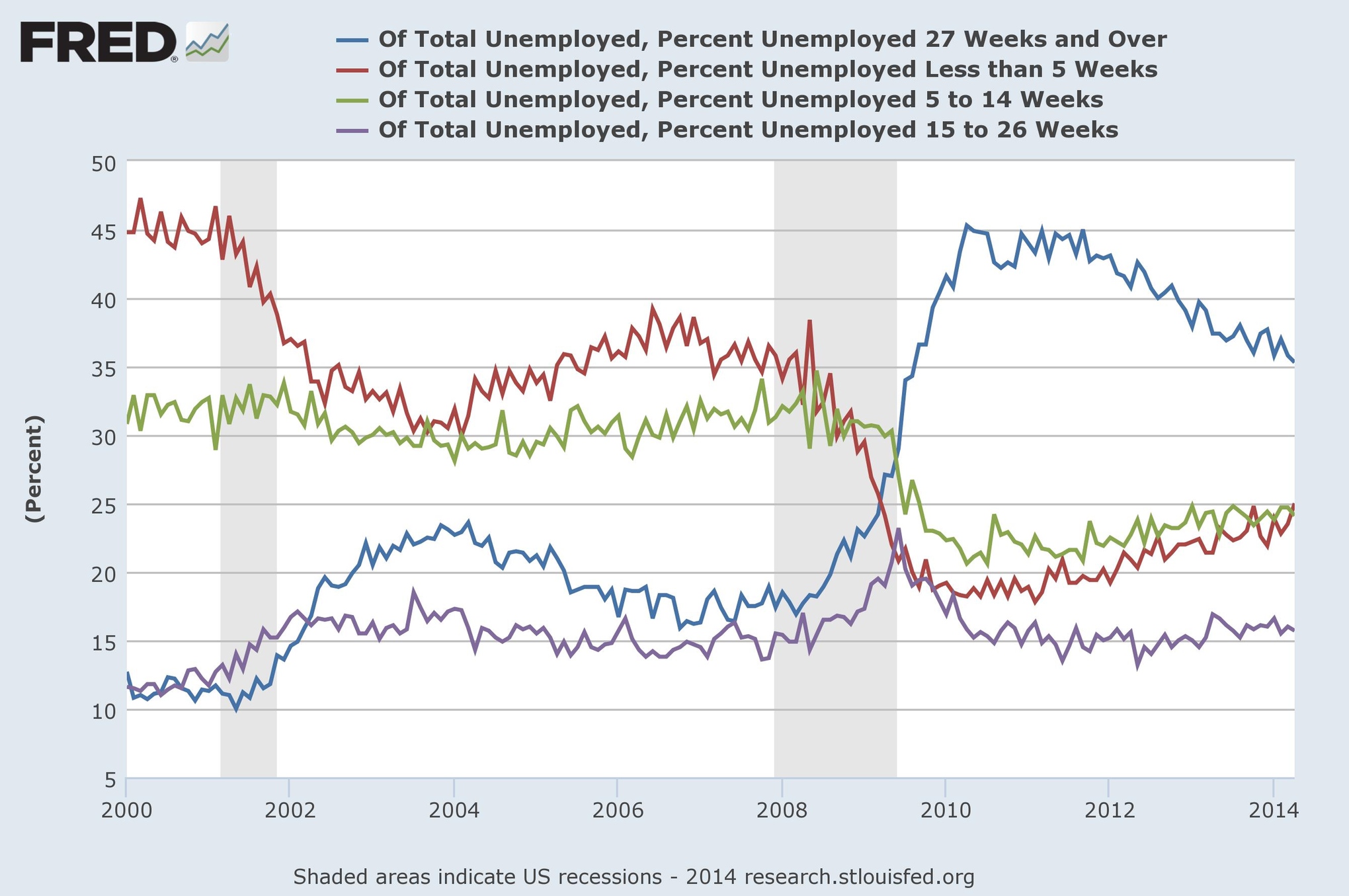 As Bloomberg reported this week, long-term unemployment is making some economists question whether Janet Yellen is overstating the amount of slack in the labor market. Yellen has said she thinks most of the current unemployment is cyclical rather than structural — that is, that people are out of work because of bad economic conditions, not because they aren't matching up closely enough to the jobs that are available.

But if long-term unemployment is making it harder for people to keep or acquire the skills they need to get jobs, then "tightening" up the labor market through Fed policy might not get them back to work; there's not as much slack, in other words.

The tricky thing for Yellen is figuring out where to go from here when her indicators aren't giving a definitive answer. To go back to the clothesline analogy, the problem is that Yellen and other economists can't see the clothesline, or even tug on it to get a feel for it — they can only read some statistics on what it's doing. And those statistics might be misleading.

Why is Janet Yellen so worried about it?

She wants to know what she and her colleagues at the Federal Reserve can do about it. The Fed is charged by Congress to do two things: keep prices stable and foster maximum employment.

In an effort to stimulate the economy toward maximum employment, the Fed has been keeping interest rates really low and is also on its third round of quantitative easing, a program of massive purchases of bonds from the private sector.

if there's a lot of labor market slack, there's both reason and room to do something about it.

Despite all of that stimulus, inflation remains below the Fed's threshold of 2 percent. So if there's still something to be done about the job market, there's both room to do it and reason to do it. But that "if" is the big question hanging over the heads of Yellen and her colleagues.