Amir Sufi is a professor of finance at the University of Chicago Booth School of Business and the co-author of a new book and a new blog on debt and the Great Recession, House of Debt, with Princeton economist Atif Mian. The book goes on sale May 21. I interviewed Sufi over the phone to talk about it.

The following is a lightly edited transcript of our conversation.

Evan: Your book makes the case that there's something uniquely dangerous to the economy about debt — something that makes debt the cause of wild bubbles and crushing depressions. What, exactly, is wrong with debt?

Amir: Debt exacerbates downturns because it concentrates the brunt of a recession on people who have debt, who tend to be the poorest members of society. In response to having losses imposed upon them, these people cut spending dramatically and send the economy into a tailspin from which it is very hard to recover.

When we're looking for clues as to what drives the most severe downturns, the one jumps right out at you is that it's something about debt. One that we use in our book, for example, is that countries with higher debt levels tend to have deeper recessions and weaker recoveries. We've garnered a lot of evidence, and now we're trying to give a theory for why.

From a macroeconomic perspective, the key issue that has led to skepticism of why debt might be important is the view that debt is just a distributional contract. Suppose I have a house worth $100,000 and a mortgage worth $80,000. If the house's value falls $20,000, all the loss is born by the debtor. Economists like Ben Bernanke have said who cares who takes the loss, the homeowner or the bank — it shouldn't matter.

We're saying that's wrong. When you have a lot of wealth inequality in the economy, people have to use debt to maintain spending. Then when the aggregate economy collapses, and people have debt, the  losses are forced on the poor, who have the highest marginal propensity to consume and are now credit-constrained, so they have no recourse but to cut spending substantially.

Part of the logic here is that if Bill Gates were to lose $35,000, it wouldn't affect his spending. bill gates loses 35k doesn't change spending — but when the average homeowner loses $35,000 in home equity, they change their spending plans substantially.

Evan: This isn't a conventional argument that accumulating too much debt is bad, but rather a more radical one that the idea of debt is a bad one — that it's flawed by design, right?

Amir: There are basically three flaws. The first is that debt contract have horrible risk-sharing. They're protecting people who don't need any protection and forcing losses on those who do. That is a failing of the financial system. It's not doing the proper risk-sharing job we need it to do.

The second is the foreclosure effect of debt. Imagine that a downturn occurs, and the economy has a misallocation of resources and needs to reallocate. Maybe we have too many houses, and we don't need so many of them. One of the major points we make in this book is that debt does a horrible job of facilitating that reallocation. The foreclosure process exacerbate prices declines, and that has its own knock-on effect on economic activity.

The third is that one thing debt does is that it gives buying power to the most optimistic people in the economy. That theory comes from the economist John Geanakoplos, and it works like this. If you're in an economy without only debt, only someone with has enough money to buy a house can bid prices up. But what debt does is allow the guy who doesn't think house prices are going up to lend to the guy who does.

Evan: One of the things you do in the book is identify the Great Recession as a prototypical example of a debt-driven recession. Talk me through some of the numbers on the debt buildup in the 2000s.

Amir: One statistic I like to give is the national ratio household debt to income — if you think about it in two pieces, that's the aggregate stock of debt versus the aggregate flow of income that can be used to pay that debt down. It went up from 1.4 to 2.2 in just six years during the 2000s. To put that in perspective, it's trended upwards historically, but it took 35 years to go up the same amount. The nation's debt burden went up in the six years before the recession as much as it had in the 35 before that. 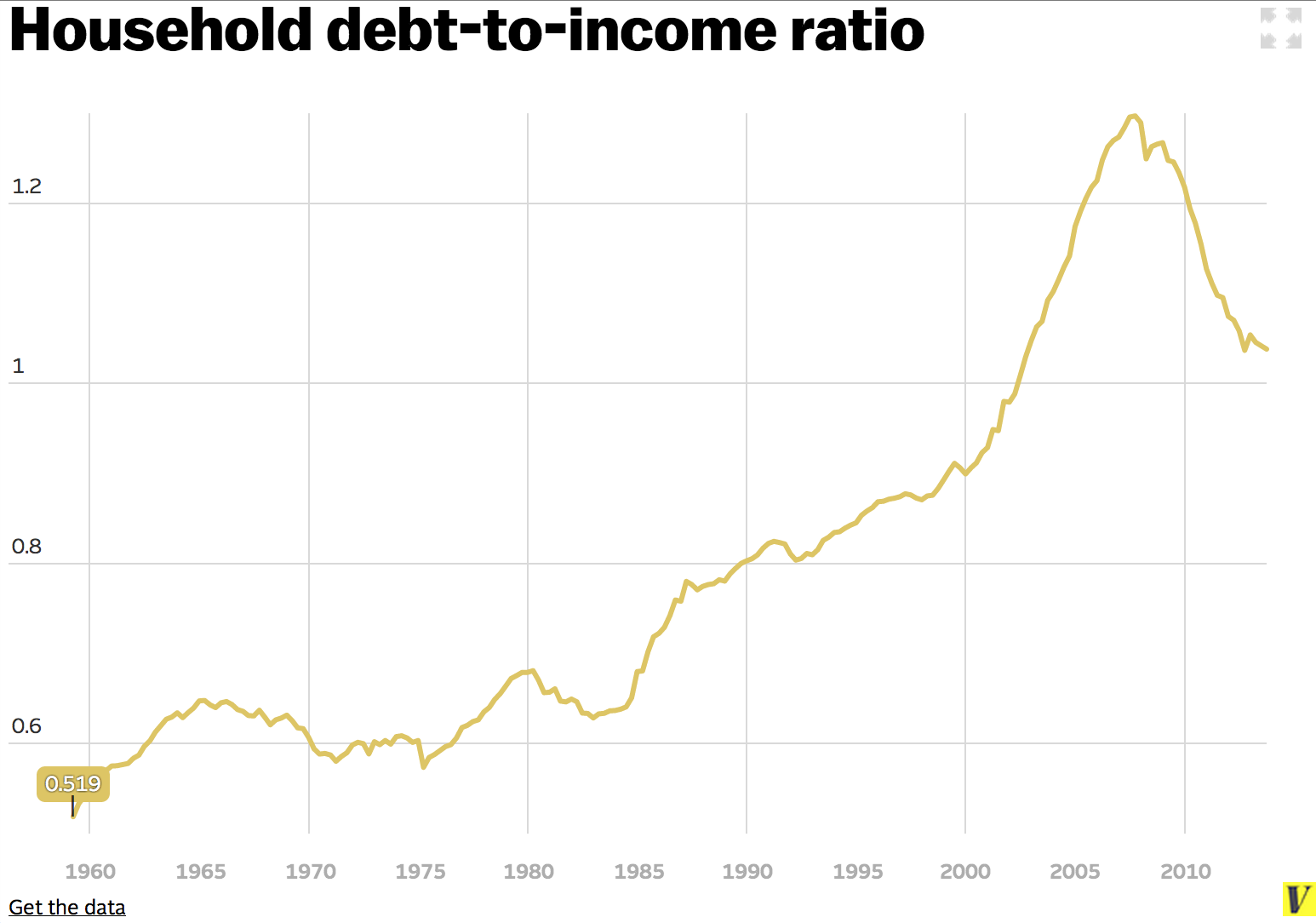 That's the national average — and in some areas of the country, like California and Florida, the rise was much sharper.

Evan: So the severity of the Great Recession, once it began, really shouldn't have been that surprising.

Amir: If you look at the Great Depression, you see the same picture. There was a large rise in households' debt burdens in 1929 and 1930, right as the downturn began.

What's even more convincing here is that, internationally, it's exactly those countries with the biggest rise in debt right before the Great Recession that had the most severe downturn. Work by Kevin Lansing and other researchers at the International Monetary Fund basically shows that you could have predict which countries would have the worst time in the recession from their debt level right before.

And this rule turns out to keep working over and over. U.S. counties with the greatest rise in debt also had the deepest recession. Mervyn King, who ran the Bank of England, found that the countries that had the worst recession in the early 1990s also had the worst debt going into it. It's just a very robust correlation through history that needs an explanation.

Amir: During the recession, we just completely and totally bungled the housing mess. And what's interesting is that officials from the Obama administration say that openly now. There should have been much more aggressive facilitation of principal write-downs and a more aggressive effort on cramdowns.

What would have changed things during the recession was some recognition from policymakers that household debt burdens were crucial to understanding why the recession was so severe. Instead of focusing on household debt, most policymakers were overly concerned with the banking sector. This made the debt problem a zero-sum game, because you end up thinking that you can't help the homeowners because that would hurt the banks. What's happened in Spain is just an awful example of where this kind of thinking gets you.

On what happened before the recession, I'm not in this camp that blames Fannie Mae or Freddie Mac or policymakers pressuring them to lend. What happened in the 2000s was that the private sector started producing mortgages that people were never going to be able to repay. Now why did that happen? The securitization of mortgages had been designed to produce AAA-rated securities.

So economists have gotten to the point where we see that debt exacerbates downturns and fuels bubbles. And yet our government has massive subsidies for debt: the mortgage interest deduction, for one, or the requirement that money market funds have to hold AAA-rated debt, which gives an incentive to financial corporations to issue that debt. We end up subsidizing exactly the kind of financial set-up that economists now think is dangerous. So those seems like some terribly ill-advised policy choices.

Amir: In the book we offer two broad policy prescriptions, one for the short run and one for the long run. The one for the short run is more aggressive debt forgiveness amid severe downturns. In 2014, that recommendation is probably not going to help now. But imagine a scenario in which the default rate on student loans skyrockets: right away, the government should start to facilitate debt reduction. I don't mean bailouts. I mean government pushing losses onto creditors.

The long-run answer is to make debt financing more equity-like, to correct the bad risk-sharing. We're calling our proposal "shared responsibility mortgages." The idea is that you have a mortgage contract where your debt is indexed to the average home price in your zip code. If the value of homes go down, the principal balance and the monthly payment would go down. That would reduce foreclosures in a major way because you would have more equity in the home amid downturns. It would also prevent bubbles in the first place, because lenders would understand they are taking on some downside risk, changing their incentives to lend.

We understand this is an enormous challenge and that the current financial system is dependent on debt. What we hope to do is prod people to think about debt in this way. What's good news is that the financial industry has become more interested recently in this equity-sharing idea — though for a funny reason. They're angry that coupon payments on mortgage bonds are so low, so they want some upside on home value.