How scientists made a new chemical element, explained in GIFs

Share All sharing options for: How scientists made a new chemical element, explained in GIFs

The periodic table is on its way to getting a new chemical element.

On May 1, researchers in Germany published a paper in Physical Review Letters showing that they had created element 117. The results confirm previous experiments by a team of Russians and Americans and make it likely that 117 will someday get an official name and join the periodic table. 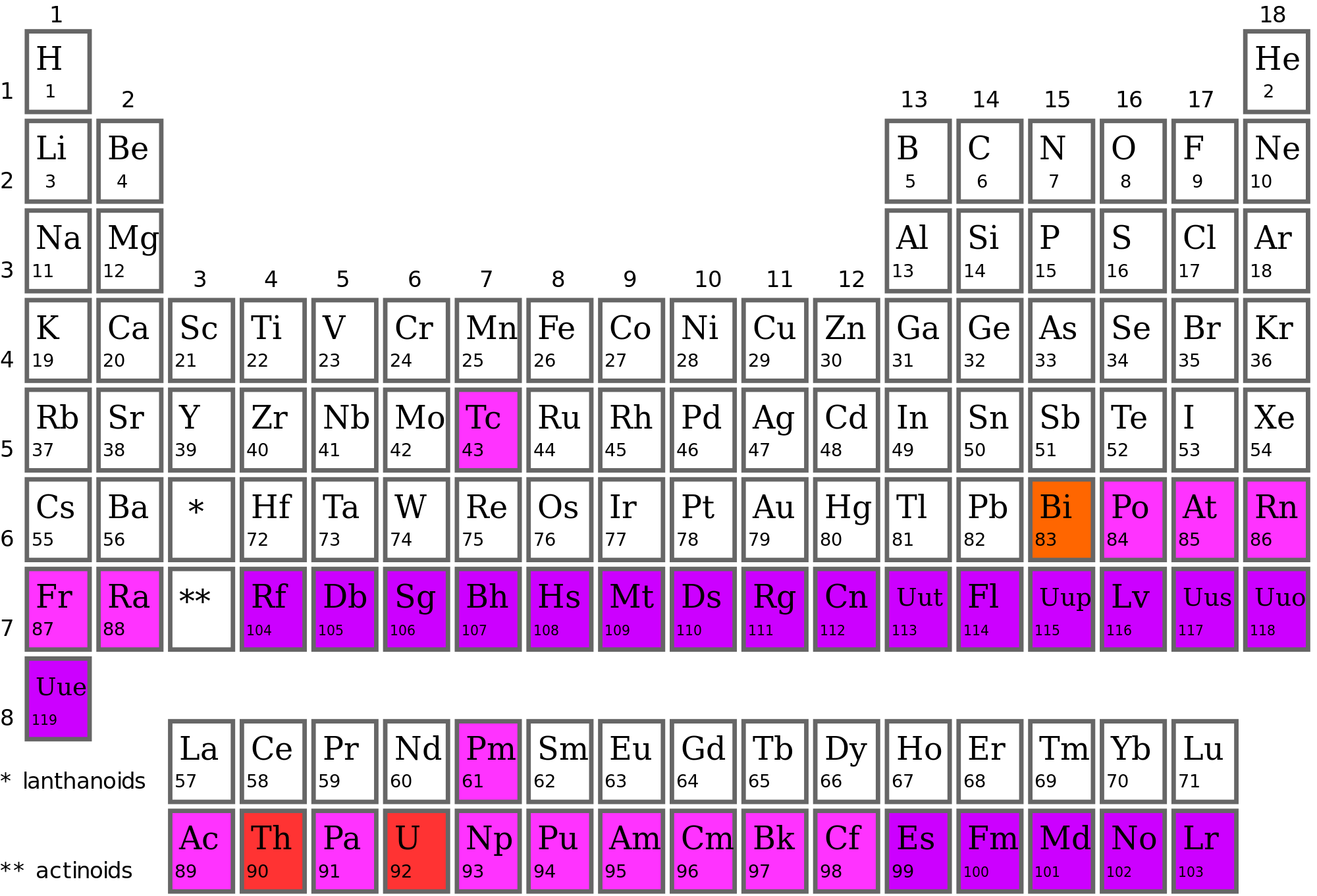 Elements labeled in purple have never found in nature and have only been created by scientists. Pink are primarily man-made and only found in nature in trace quantities. Red and white ones occur in nature, too. Note: No one has made 119 yet. This is an optimistic chart, I guess. (Incnis Mrsi/Wikimedia)

Researchers have been creating man-made elements since the 1950s. Recently, in addition to element 117, some experiments seem like they generated 118, and scientists are now attempting to make 119.

Synthetic elements are exceptionally difficult to create and only exist for a split second before falling apart. How do researchers do it, and why do they even bother? Here's the story of man-made elements, in gifs:

First, let's start with the basics.

Most known chemical elements have been found to occur on Earth naturally. All elements are all denoted by their atomic number, the number of protons in their nucleus, and the natural ones start with hydrogen (1) and end with californium (98):

The atoms of these synthetic elements are all really, really big, but only exist for a short period of time. The bigger they get, the more positively charged protons they have in their nuclei, which repel each other and help make the atom unstable and more and more radioactive:

There are lots of reasons why scientists might want to make new elements. Finding out how these new atoms behave helps with basic nuclear physics, and some are simply interested in better understanding what makes nature tick:

Scientists are also motivated by the quest to find the theoretical, magical island of stability — where a proposed group of very heavy elements might have much longer lives, flouting the general trend. Certain special numbers of protons and neutrons, referred to as magic numbers, are predicted to produce more stability.

So scientists have been creating larger and larger elements working up to and around this possible island. And element 117 is one of those steps.

Back in 2010, researchers first created element 117 by using a particle accelerator to smash together two smaller elements: calcium and berkelium. (The experiments were especially tricky because berkelium itself decays quickly and had to be generated in a nuclear reactor at Oak Ridge National Laboratory.) They did it again in 2012. Sort of like this:

The placeholder name for element 117 is ununseptium. And, as expected, the element was highly radioactive. Its half-life is only about 50 thousandths of a second. But it survives long enough to suggest that the magic island of stability is very close.

Then, in spring of 2014, a separate research group confirmed the existence of 117 through an entirely different method. These scientists were actually trying to create a different element — element 119. They haven't been successful in doing so yet. But they did manage to create 117 by smashing a beam of ionized calcium at 67 million miles per hour into berkelium:

In the process, they also produced something unexpected: a new isotope of element 103, lawrencium (named after Lawrence Berkeley National Laboratory). This isotope turned out to be surprisingly stable — another piece of evidence that the island of stability might be nearby:

It's not official yet, though. The International Union of Pure and Applied Chemistry will be the one to make the call. At some point, it will decide whether there's actually enough evidence for element 117 to officially join the periodic table and get a real name:

Element 117 may have to hold on a while for official confirmation. The last element to join, 116, waited six years.

Update: Added note to caption that 119 is mislabeled on the periodic table at the top.