How the Common Core made Kafka way more popular

Share All sharing options for: How the Common Core made Kafka way more popular

The list of stories, poems, and nonfiction near the end of the Common Core state standards isn't supposed to be an assignment list. But teachers seem to be using it that way.

The standards, now used by 44 states, spell out what students should learn and learn how to do at each grade level. Near the end is a 13-page, single-space list of books, poems and plays.

The list, called Appendix B, is meant only to give an idea of the type of works students should be reading in order to meet the standards; middle-schoolers aren't required to read The Adventures of Tom Sawyer, but teachers should choose books at a similar level of difficulty or with similar themes.

The list is having a big influence. A new study finds that nearly every book on the Common Core list is more likely to be read than it was a few years ago.

That could lend support to concerns that books not on the list will be neglected. In other words, the Common Core is good news for Tom Sawyer, but it could be bad news for Huckleberry Finn — left out of Appendix B.

"It's a misuse of Appendix B to make it a curriculum," says Carol Jago, a past president of the National Council of Teachers of English, which helped develop the standards. "It was never intended to be so. But people are just nervous about doing exactly what the Common Core says."

Many works on the list are classics that were in classrooms before the Common Core: The Great Gatsby. "Ode on a Grecian Urn." The Scarlet Letter. The Gettysburg Address. Death of a Salesman. Because the Common Core focuses on nonfiction, Appendix B also includes a significant amount of nonfiction reading, from presidential executive orders to Henry David Thoreau.

A new report from Renaissance Learning on what 10 million students read during the 2012-13 academic year suggests that merely being in Appendix B could lead to a dramatic popularity increase for books that were obscure, out of date, or out of favor:

Many books that were popular classroom standbys also got even more popular: To Kill a Mockingbird was already the most commonly read book in high school, but students are even more likely to read Harper Lee's book now than they were before it was included in the Common Core's list. 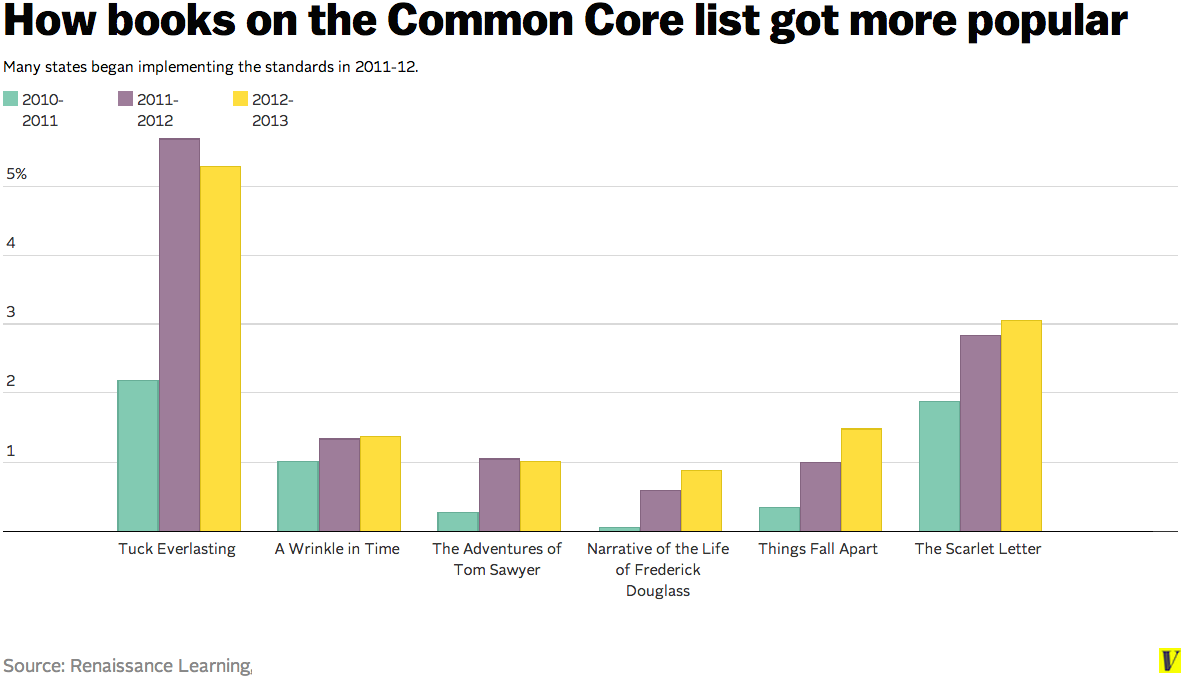 "If you're a Common Core supporter, I think you'd feel good there's more reading of the exemplar books and nonfiction," says Eric Stickney, director of educational research at Renaissance Learning.

The list is a very long way from providing a unified canon used in most American schools. Even the most-read book at any grade level — Dr. Seuss's Green Eggs and Ham — was read by just 16 percent of kindergarteners and first-graders, the Renaissance study found. Books that saw the biggest popularity boost are generally still read by less than 2 percent of all students.

Students might also just be reading more. Scholastic Books has seen 30 percent sales growth for books listed on Appendix B. But books at similar levels of difficulty and depth that aren't on the list have grown by about the same amount.

"We are seeing a rise in the purchase of exemplary (books), but it's not limited to that," says Suzanne McCabe, an editor at large at Scholastic. "Generally, they are buying texts that are authentic, that have rich language, that are helping their students achieve their goals in the Common Core."

Some people worry that books left off the list will also fall out of prominence in the classroom. In part because the list includes many traditional classics and favors older works now in the public domain, white male authors dominate the high school portion of Appendix B.

Henry Louis Gates, Jr., the prominent Harvard University scholar of African-American studies, told the New York Times that the Common Core's Appendix B is one reason students are less likely to read essayist James Baldwin in high school than they were a generation ago: "A lot of public high school students will not have heard of him, and that's a tragedy."

Baldwin's works fit into the Common Core, Jago says. They're in the same tradition as Thomas Paine's "Common Sense," Richard Wright's Black Boy, or George Orwell's "Politics and the English Language," all included as examples.

"If you can't see that the titles that are listed in the 11th- and 12th-grade texts absolutely support the use of James Baldwin in the classroom, maybe you're not a very good reading teacher," she says.

But when the English teachers' group helped state officials create the Common Core, she adds, "they wanted a short list."