How the US stopped its fisheries from collapsing

Share All sharing options for: How the US stopped its fisheries from collapsing

We hear a lot of grim stories about overfishing and the decline of fisheries around the world. Bluefin tuna is vanishing. Chilean sea bass is dwindling. Pretty soon, it sometimes seems like, all that'll be left is the jellyfish.

Back in the 1990s, many of the US fish populations were in serious decline

So it's worth highlighting a country that has actually done a lot to curtail overfishing and rebuild its fisheries in the past decade — the United States.

Back in the 1980s and '90s, many fisheries in the US were in serious trouble. Fish populations were dropping sharply. Some of New England's best-known groundfish stocks — including flounder, cod, and haddock — had collapsed, costing the region's coastal communities hundreds of millions of dollars.

But the picture has improved considerably in the last decade, thanks in part to stricter fishing regulations. Last week, the National Oceanic and Atmospheric Administration (NOAA) released its annual fisheries update for 2013 — and the news was encouraging. Yes, progress has been uneven. About one-fifth of assessed stocks are still overfished. But on the whole, US fisheries are steadily recovering.

US fisheries are recovering — with a few glaring exceptions 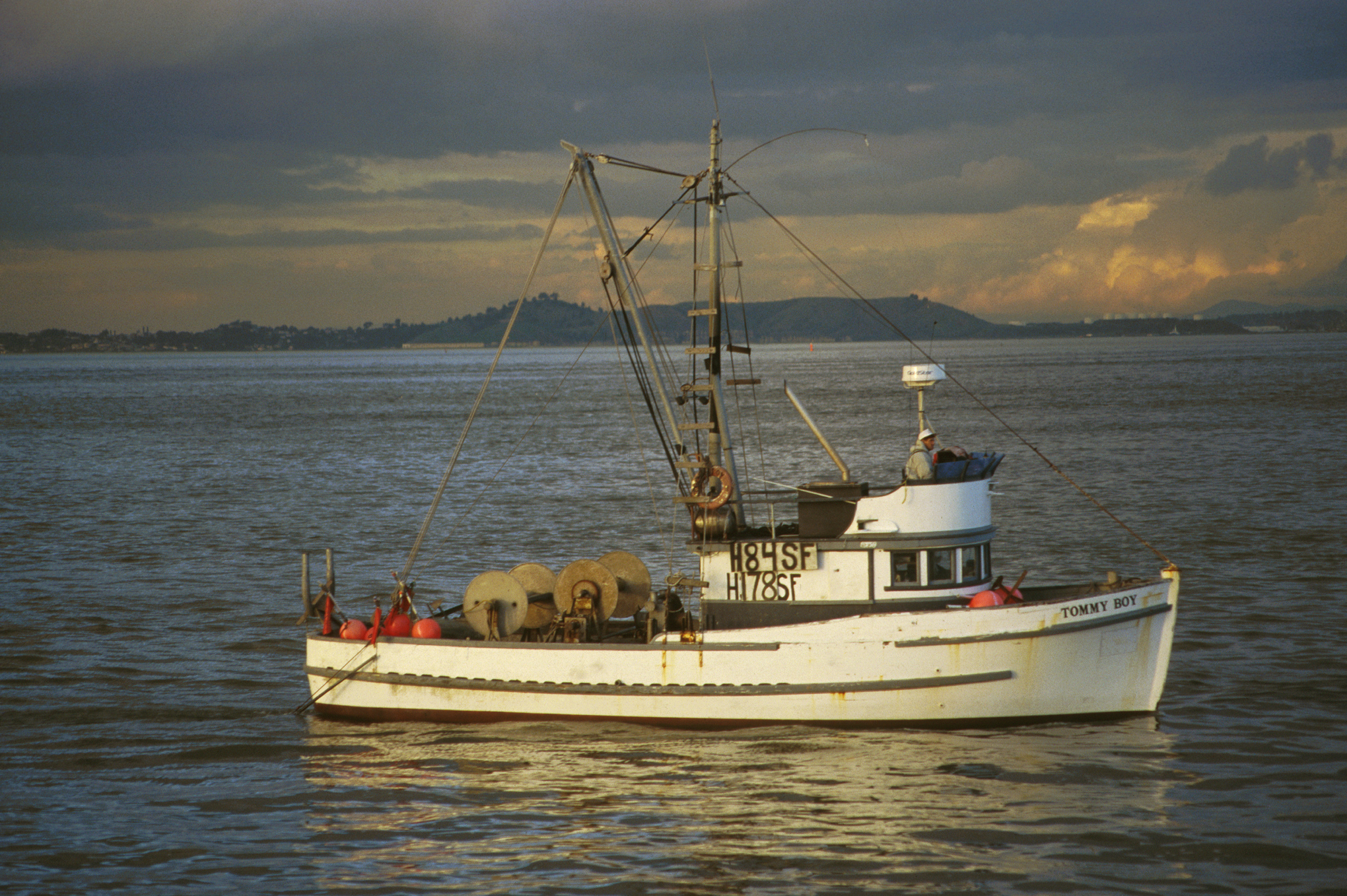 Back in 1999, NOAA listed 98 stocks as "overfished." Today, that's down to 40. What's more, 34 previously depleted fish stocks have now been "rebuilt" — meaning that they've rebounded to a level that supports the maximum sustainable yield. 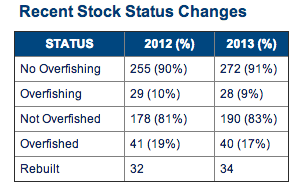 This rebound has been a boon to the fishing industry: US commercial fishermen caught 9.6 billion pounds of seafood in 2012, the second highest total in more than a decade (2011 was the highest year).

The rebound in US fisheries was also noted last year in a separate study by the Natural Resources Defense Council, which studied 44 key fish stocks that had been seriously depleted and found that about 64 percent showed significant signs of recovery.

Many fish stocks are recovering — but some areas are still struggling

The study did point out some glaring exceptions. A few regions were struggling to rebuild their fish stocks: New England, the Gulf of Mexico, and the South Atlantic. In New England, certain types of cod, flounder, and white hake simply weren't recovering. (More on this below.)

There are also a bunch of unknowns here: NOAA only assesses about 230 of the 478 types of fish that are under regulation. Steve Murawski, a former scientist at the National Marine Fisheries Service, told me in an interview last year that assessments are complicated and expensive — so NOAA has to "triage" by focusing on the most economically important species.

Still, most experts struck a note of guarded optimism on the state of US fisheries. "There are still a lot of areas where we'd like to see progress, especially in New England," Ted Morton, director of the US oceans program at the Pew Charitable Trusts told me. "But overall we're on the right track."

How Congress cracked down on overfishing 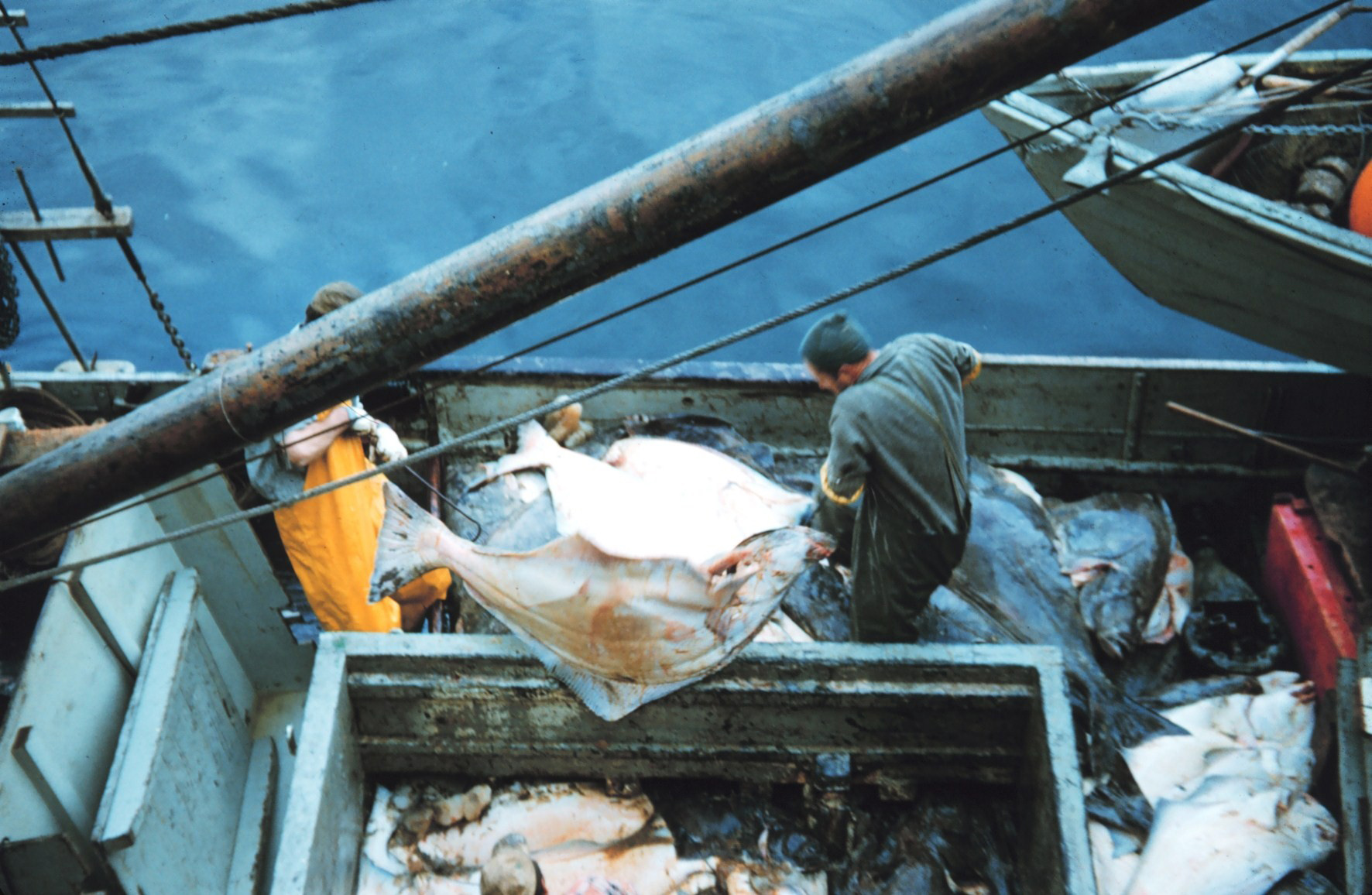 So how did this all happen? Many scientists and conservation groups point to efforts by Congress to tighten the Magnuson-Stevens Act, which governs fisheries management in federal waters.

That law was originally written back in 1976 to help promote the US fishing industry. But it worked so well that many fisheries were fished hard in the ensuing decades — leading to a decline in the overall number of fish being caught by the early 1990s: 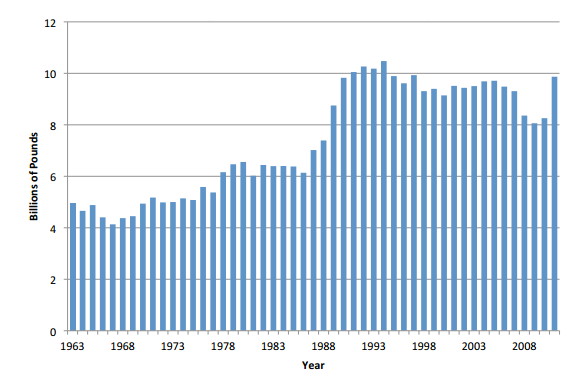 Volume of U.S. domestic commercial landings over the past 50 years. NOAA/National Academy of Sciences

So, in 1996, lawmakers added strict conservation measures to the law, requiring that overfished stocks be rebuilt within 10 years. Then, in 2006, Congress made this requirement even more concrete — individual regions had to impose hard catch limits on areas that were being overfished, starting in 2010.

In 2006, Congress imposed hard 'catch limits' on regions that were overfished

"Prior to that, fisheries managers would often use softer techniques to try and prevent overfishing," says Seth Atkinson of the Natural Resources Defense Council. "They would try to limit the number of days that fishermen could spend at sea, or limit the number of boats that could go out. But there wasn't much hard accountability, and you saw a lot of managers still permitting overfishing. And that's not a personal criticism of them. These are difficult decisions to make and often require short-term sacrifice."

Different regions in the United States now employ a variety of policies to regulate overfishing. Alaska, for instance, uses a "catch share" system, in which fisherman are granted a fixed percentage of the overall haul each year. This system gives the industry a stake in ensuring that the overall fishery remains healthy — and studies have found that catch shares are effective at preventing fisheries collapse.

Other regions rely on flat limits for overall catches of certain types of fish. This isn't always as easy as it sounds — it depends on scientists and regulators setting the limits correctly. Make the limits too loose, and fish populations start collapsing. Make them overly stringent, and fishermen suffer.

New England, for one, has a history of struggling with these limits — in 2013, for instance, regulators realized that Gulf of Maine cod were collapsing unexpectedly after years of overly lax limits and had to impose a severe 78 percent reduction in catches.

The debate over fishing regulations 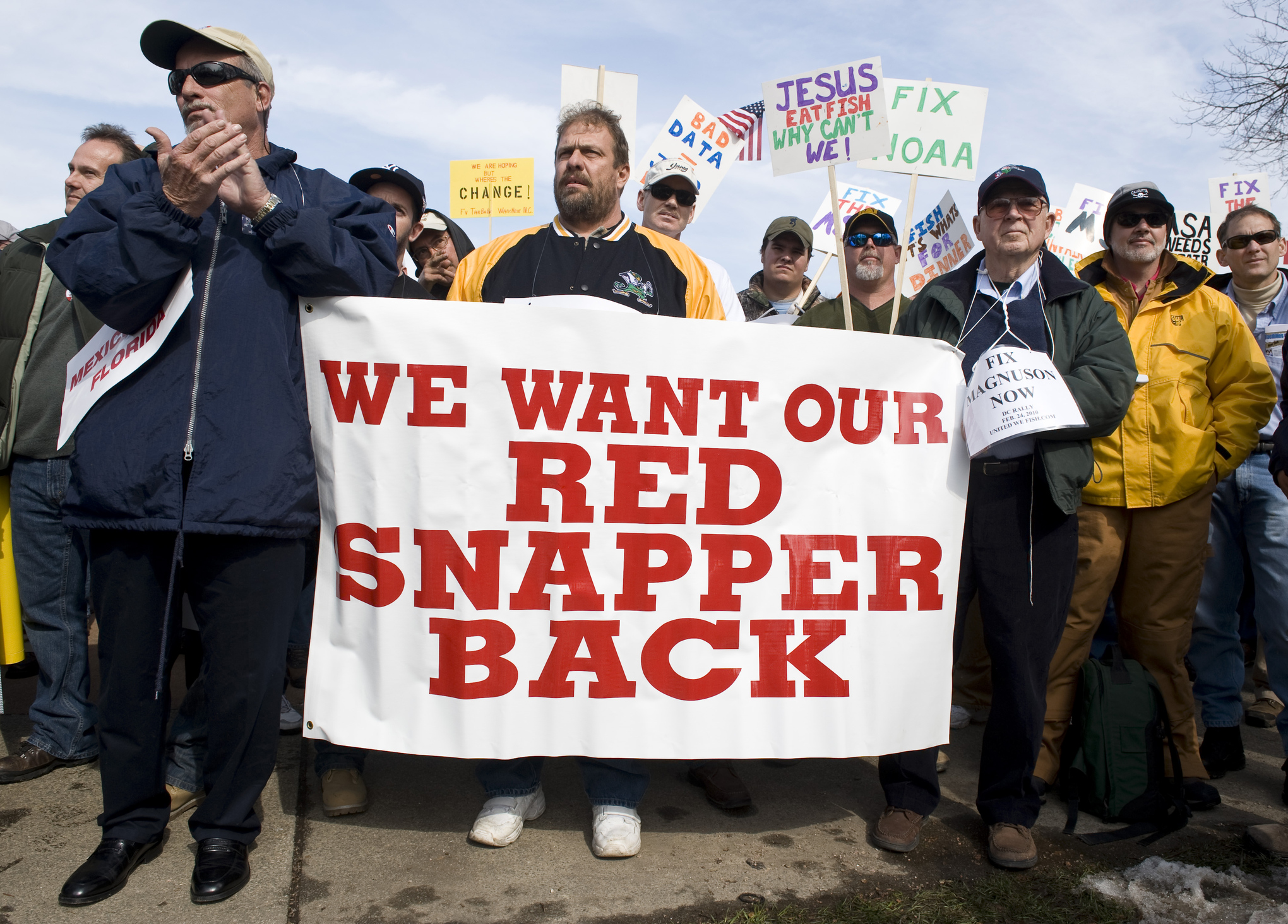 Indeed, the current system is far from perfect — and there's a lot of debate about how to improve it.

For instance, Atkinson says, there's not always great scientific information about many of the fish species in the Southeast and Gulf of Mexico. That makes setting catch limits more difficult. What's more, this area is dominated by recreational fishing, which is a lot harder to regulate than areas like the Pacific where fishing is dominated by a smaller number of commercial ships.

Congress is now debating whether to revise the fishing rules

On the flip side, some fishing groups have argued that the rules are too stringent — particularly the requirement that overfished stocks be rebuilt in just 10 years. A National Academy of Sciences report last fall agreed that this limit was somewhat arbitrary — although it concluded that the regulations overall had helped rebuild US fisheries.

This is about to become a much bigger political issue. The Magnuson-Stevens Act is soon up for reauthorization, and Congress will mull over further changes to the law. In the House, Rep. Doc Hastings (R-WA) has circulated a draft bill that would add more flexibility to some of the rebuilding requirements. (Here's a hearing he held on the issue.)

Conservation groups and other experts tend to oppose this idea. Their argument? The current system already has a fair bit of flexibility and seems to be working well. Most fish stocks are on a path to sustainability. By contrast, when the regulations around fishing were more flexible — back in the 1980s and 1990s — many stocks nearly collapsed.

That said, the rest of the world isn't doing as well 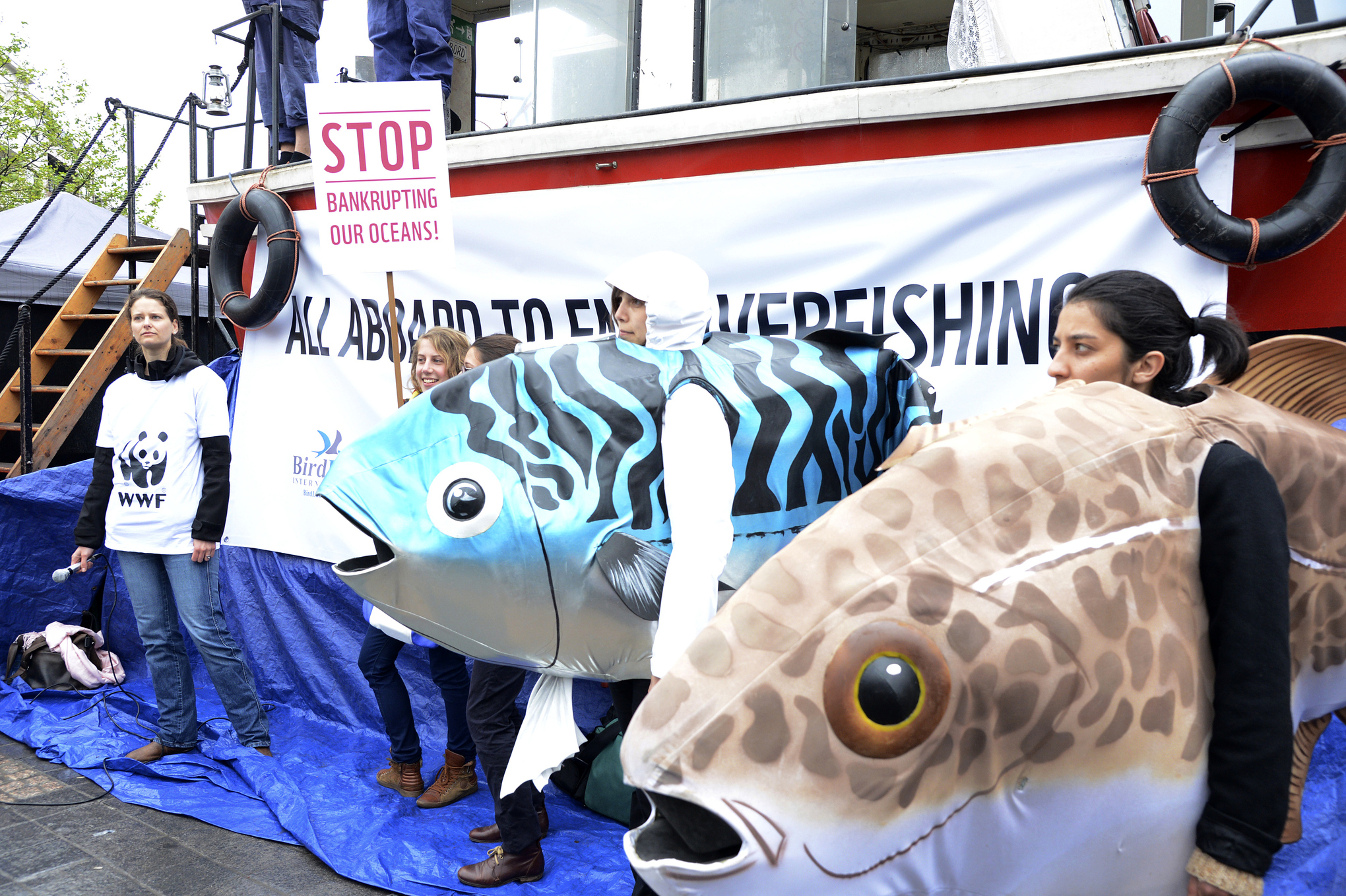 A few supporters of WWF stage a protest against overfishing in front of the European Union Council building in Brussels on May 13, 2013. THIERRY CHARLIER/AFP/Getty Images

Now the big caveat: Yes, US fisheries seem to be recovering. But that's not true for much of the rest of the world. And, given that the United States imports around 91 percent of its seafood, this is a pretty crucial caveat.

All told, the best-managed fisheries around the world — the United States, Canada, Australia, New Zealand, Norway, Iceland — only make up about 16 percent of the global catch, according to a recent paper in Marine Pollution Bulletin by Tony Pitcher and William Cheung of the University of British Columbia.

By contrast, more than 80 percent of the world's fish are caught in the rest of the world, in places like Asia and Africa — where rules are often less strict. The data here is fairly patchy, but the paper notes that many of these nations are less likely to follow the UN's Code of Conduct for Responsible Fisheries, and there's evidence that "serious depletions" may be occurring there: 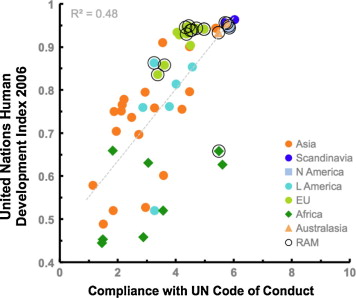 Correlation of compliance with the FAO (UN) Code of Conduct for Responsible Fisheries (on a scale of zero to ten) with the UN Human Development Index for 53 countries, representing 95% of the world fish catch.

"It all depends where you look," Pitcher told me in an interview last year. "There are a few places where fisheries are doing better: The US, Australia, Canada, Norway. But those are relatively rare. In most places, the evidence suggests that things are getting worse."

In theory, other countries could try to adopt similar measures: catch limits, better planning, rules against illegal fishing. One problem? Doing proper fish assessments is expensive and difficult — the United States doesn't even do it for all its stocks yet. And, for now, those practices haven't yet spread everywhere.

Further reading: Just how badly are we overfishing the oceans?