The stereotype labor market: women are great workers, but men are better bosses

Share All sharing options for: The stereotype labor market: women are great workers, but men are better bosses

Good news for anyone worried about the gender workplace gap: most Americans think young women are better prepared for work than young men are.

Except for one thing: they don't think women's advantage will hold for long.

A new survey finds that most Americans think women are better set up to succeed when they first enter the workforce. The survey, from Massachusetts' Bentley University, asked more than 3,100 online participants nationwide about gender in the workplace. Fully 59 percent of respondents said women are better prepared for their first jobs than men are (margin of error is +/- 1.75 percentage points).

But then the figures flip when the respondents look further down the road. Just over half — 53 percent — said men are better-prepared for their full careers. In addition, 69 percent said men were "better equipped to succeed in today's business climate."

It's just one survey, and it's an online one at that (online surveys, with their self-selecting crowds, can be less reliable than phone surveys). But if these results indicate how Americans in general think, they signal an important nuance in how Americans think about women's place in the workforce.

A clue to why respondents responded the way they did is in how they think about men's and women's respective skills when it comes to business. 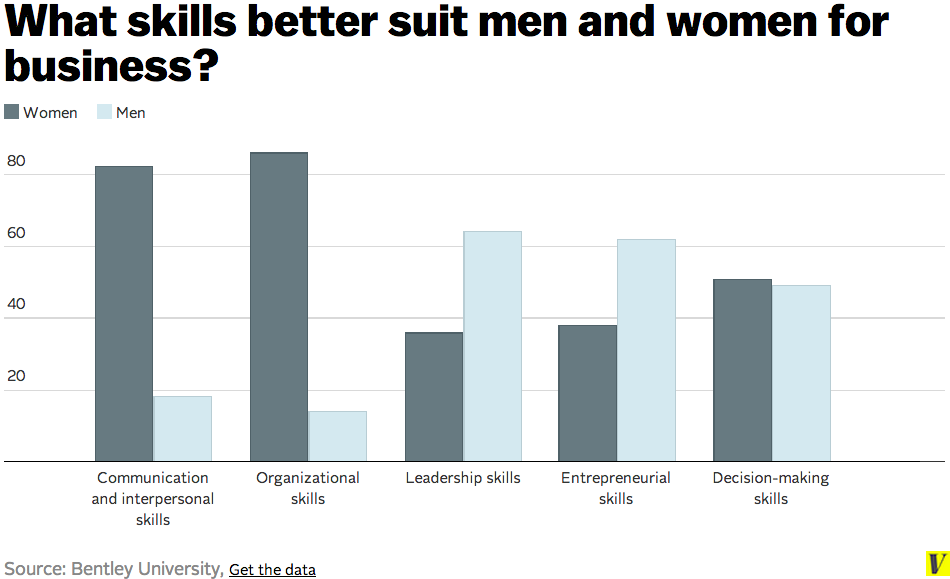 Importantly, the results are about perceptions, not reality. But men and women alike have similar trends in how they think about themselves and each other. That suggests an extension of the idea that the factors that make a woman successful at school — following rules, working hard and getting rewarded as a matter of course — can set them back in the workforce. Those skills could make a woman better suited to her first job but, as the need for leadership and more strategic rule-breaking grows, she could be held back.

It's a sort of variation on the Mad Men mindset: women are great at organizing and communicating, but not at being in charge. So while women are entering the workforce in greater numbers than they were a few decades ago, somewhere along the line — and not simply between graduation and hiring day — they lose that advantage.

That said, one thing the survey didn't ask was about the preparedness to handle work in terms of outside forces — specifically, outside forces that need to be fed, changed, and brought to daycare. When respondents think about who's "better equipped to succeed," they may also have in mind the fact that childbearing responsibilities still fall disproportionately on women, meaning less time for putting in long hours and impressing the boss.