Share All sharing options for: Judges are following sentencing guidelines less than half the time (in a good way)

For the first time since the Supreme Court told judges to stop treating the federal sentencing guidelines as commandments and start treating them as, well, guidelines, judges are finally getting the message.

In the first quarter of fiscal year 2014 (that's October-December 2013), judges issued a sentence that was below the range recommended by the guidelines 48.8 percent of the time — exactly as often as they issued one that was within the guideline range.

Douglas Berman of the Sentencing Law and Policy blog thinks the news here isn't how often judges are departing from the guidelines, but how often they're the ones suggesting the lower sentence.

The majority of the time, when a sentence is lower than the guidelines recommend, it's because the prosecutor suggested it. Until August 2013, judges had consistently suggested and issued a lower sentence 18.5 percent of the time for the last four quarters. But in the past two quarters, there's been a slight but real increase: 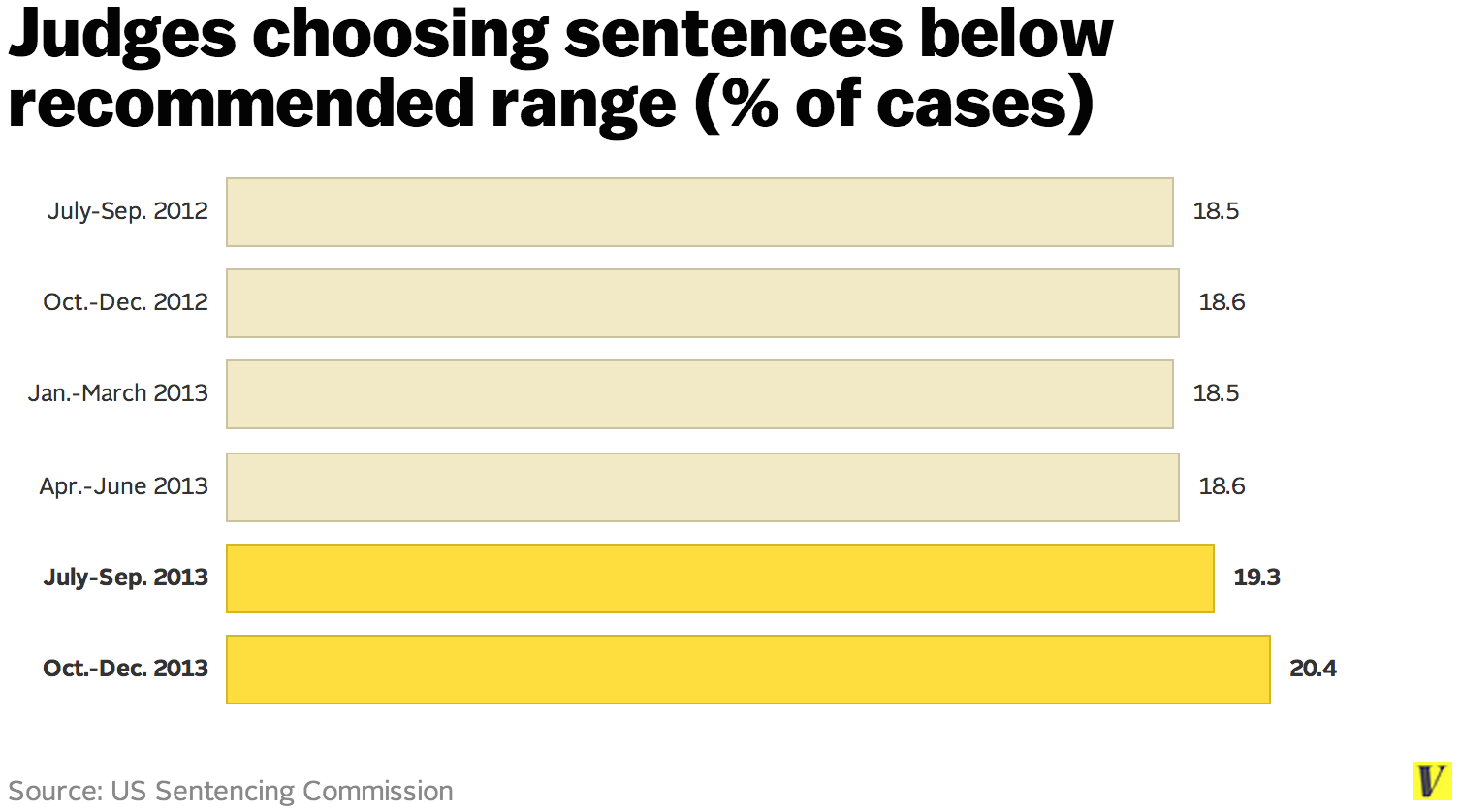 Berman thinks the increase is real, and he thinks it's due to what he calls the "Holder effect." As he wrote last year:

A few more judges were willing to impose below-guideline sentences in a few more federal cases in the wake of Attorney General Eric Holder's big early August speech to the ABA lamenting excessive use of incarceration in the United States. When the US Attorney General says "too many Americans go to too many prisons for far too long, and for no truly good law enforcement reason," I surely hope federal judges are listening and thinking even harder about whether to follow harsh guidelines that tend to recommend pretty long prison sentences in most cases.

The other thing that jumps out to me here: this most recent data reverses a really alarming trend. Throughout fiscal year 2013, prosecutors were recommending shorter sentences in fewer and fewer cases. Here's the side-by-side comparison of judge-initiated and prosecutor-initiated shorter sentences: 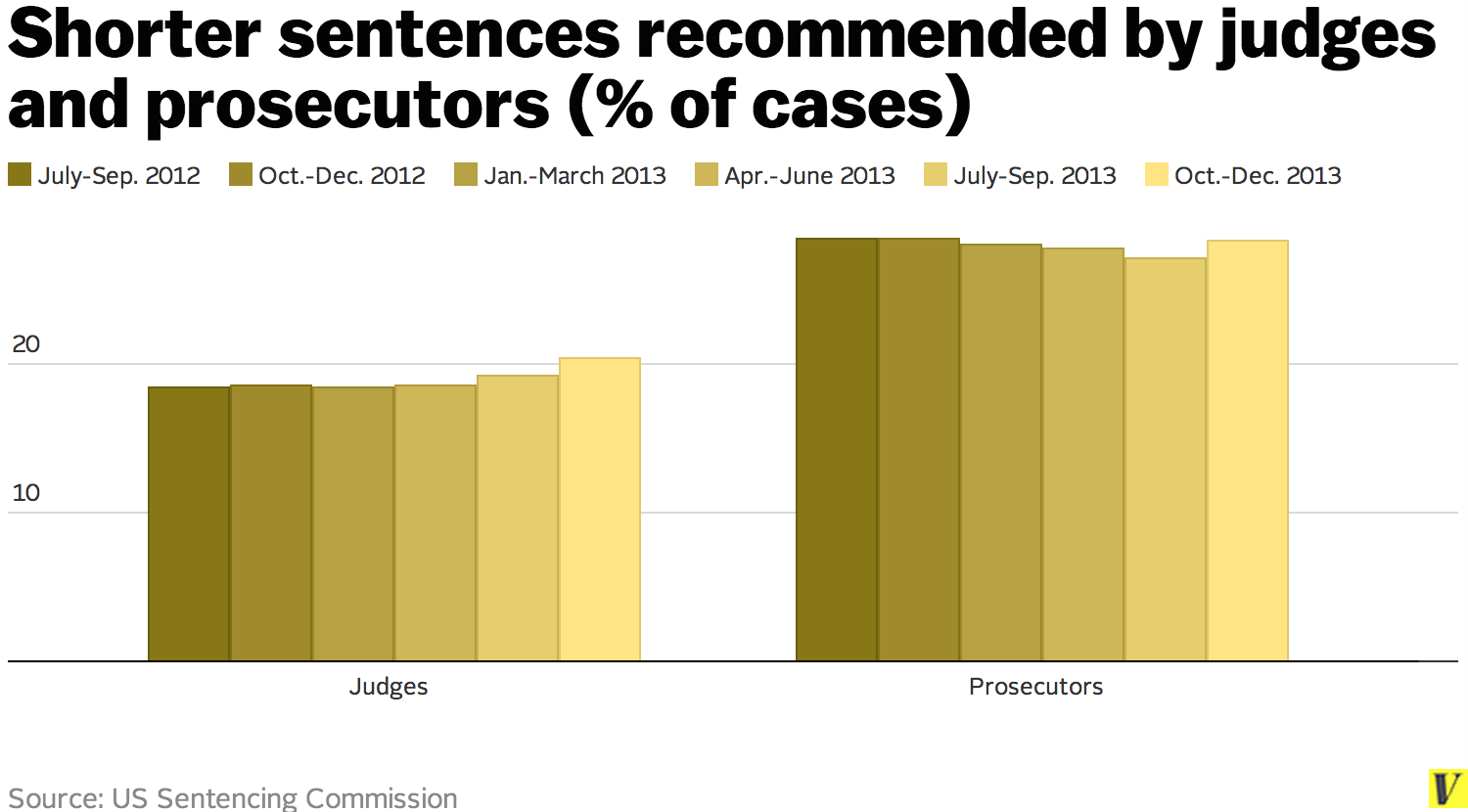 Whatever effect Holder's speech to the ABA in early August had on judges, it doesn't seem to have shamed prosecutors at all — if anything it made them less inclined to be lenient. That's especially interesting given that in August, Holder also issued a memo to prosecutors telling them to avoid triggering drug mandatory minimums in some cases by leaving information out of indictments. After Holder's memo, prosecutors appear to have stuck to the federal guidelines  — which recommends a longer sentence than the mandatory minimum for drug offenses — more often. But this past quarter, it looks like prosecutors were less resistant to Holder's effort to reduce drug sentences.

It's also going to be interesting to see how these trends go over the next three quarters. The Sentencing Commission voted on changes to the guidelines in early April (at the beginning of the third quarter of fiscal year 2014), but they won't go into effect until a couple of months into fiscal year 2015. (That's if Congress doesn't reject the changes entirely, of course.) So the third and fourth quarters of fiscal year 2014, in particular, are going to represent a time when the federal government has basically told judges and prosecutors that the guidelines they're working from are too strict. Is that going to encourage judges and prosecutors to give shorter-than-recommended sentences in even more cases? Or is this about as much independence as we can expect?