Share All sharing options for: Less than half of 12th-graders can read or do math proficiently

The high school graduation rate might be at an all-time high, but less than half of American high school seniors are proficient in reading and math, according to new data released by the Education Department on Wednesday.

There is little good news in the results from the National Assessment of Educational Progress. Just 26 percent of 12th-grade students scored as proficient or better in mathematics in 2013. In reading, 38 percent were proficient or better. And there has been no improvement in 12th-graders' scores since 2009, the last time students took the tests.

A nationally representative sample of fourth graders, eighth graders and twelfth graders periodically take the standardized tests in reading, math and other subjects. The results are sometimes called the "Nation's Report Card."

Scores released in December showed that fourth-grade and eighth-grade students have slowly improved their performance in reading and math, even though less than half of them score as proficient in those subjects. But Wednesday's data show high school seniors haven't even made incremental progress.

The math test expects high school seniors to master geometry, algebra, statistics and probability; sample questions that students should answer to be considered proficient include measuring an angle in a three-dimensional figure and evaluating an expression with a fractional exponent.

In reading, a sample question asks students to read Theodore Roosevelt's second inaugural address and answer multiple-choice questions about it, such as "Which of the following best describes Roosevelt's ideas about the relationship between progress and problems?"

Nationally, scores have inched up slightly since 2005, when 23 percent of seniors were proficient or better in math and 36 percent were at least proficient in reading. 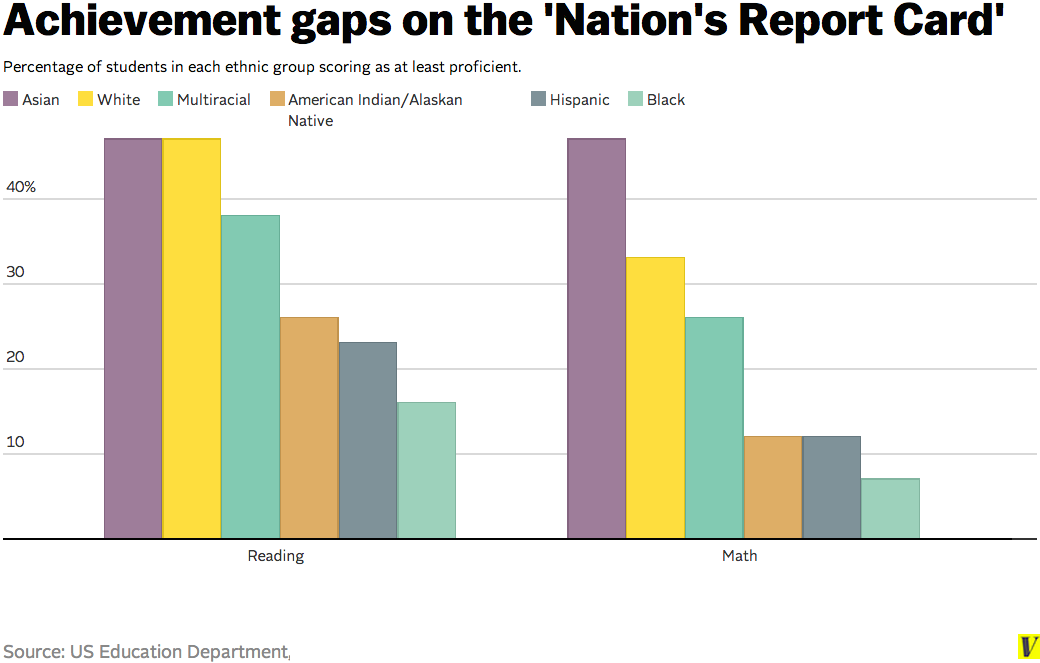 Education Secretary Arne Duncan called the results "troubling." "We must reject educational stagnation in our high schools, and as nation, we must do better for all students," he said in a statement.