Hospitals are meant to save lives — but they can often be deadly places to spend time.

From the infections patients get when they stay in the hospital (which kill about 75,000 people annually) to medical mistakes (surgeons left an impressive 4,857 items in patients over the last two decades), hospitals are places where lots can go wrong.

But hospitals are, just slightly, starting to get better at getting things right. A new federal report shows that improvements in hospital care have saved 15,000 lives in 2011 and 2012. How did this happen?

Spending money on hospital readmissions is arguably one of the worst uses of health care dollars. Readmissions happen when something gets screwed up during an initial procedure.

They aren't popular with patients (who have to spend unnecessary time in the hospital) or insurers (who have to pay for additional medical care). But there's some good news on readmissions in a new federal report: after five years of holding steady, hospital readmissions in the United States appear to be falling.

Those percentages can seem small but they add up: the 1.5-percentage-point decrease in readmissions accounts for 150,000 fewer patients readmitted to a hospital when they didn't need to be.

The drop in readmissions has coincided with the start of a new Obamacare program that penalizes hospitals that have the highest readmission rates. Hospitals can now lose as much as 2.5 percent of their Medicare revenue if they have lots of patients turning up in the hospital again. One analysis showed that hospitals have lost $227 million in fines because of this program.

Hospitals are screwing up less

The federal government says it's seen a drop-off in a number of hospital-acquired conditions that can be deadly, like a patient fall or pneumonia acquired from a ventilator. 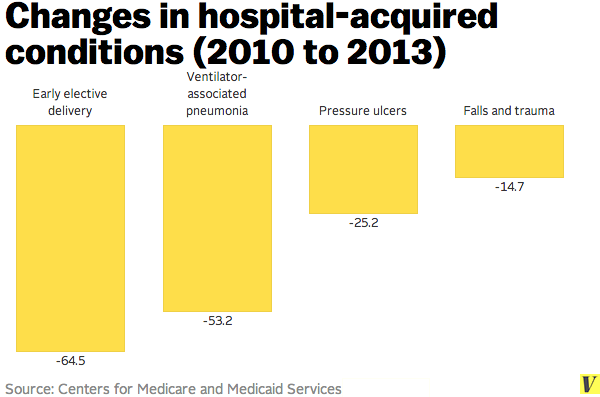 Overall, Health and Human Services shows that the number of hospital-acquired conditions has fallen by 9 percent over the past three years. In 2010, there were 145 problems acquired in the hospital per 1,000 patients discharged. In 2012, that rate stands at 132.

This decline has also coincided with health law programs that try to penalize these exact types of events. The health care law's value-based purchasing program, for example, penalizes hospitals if they don't hit certain quality metrics — and, alternatively, rewards hospitals if they do really great. These are also the type of events that can lead to readmissions, meaning that the health care law's readmission penalties could have also played a role.